A quiz that asks questions on the final words of various famous (some infamous) people as they were preparing to depart this mortal coil. Have a crack.

Quiz Answer Key and Fun Facts
1. On June 26th 1876 on a battlefield in Montana USA, a certain army officer and cavalry commander is attributed with utterring these final words (rather prematurely if you ask me): "Hurrah, we've caught them napping!" Who, quite obviously, spoke too soon?

George Armstrong Custer's famous last stand occurred at the Battle of the Little Bighorn in 1876 when the United States Seventh Cavalry were defeated by the combined forces of the Lakota, Northern Cheyenne and Arapaho Indians. The allied Indian forces were led by Sitting Bull, Crazy Horse and Chief Gall. Custer's final words have been disputed, although several troopers in columns that survived the massacre reportedly overheard him, as he stood on a bluff looking out over the Indian encampment, waving his hat and shouting the words: "Hurrah, we've caught them napping!"
2. The words "I know you have come to kill me. Shoot, coward. You are only going to kill a man" was spoken by which Marxist revolutionary on 9th October 1967 as he was faced by his Bolivian executioner?

Ernesto Che Guevara was born in Rosario, Santa Fe, Argentina in 1928. As a young man training in medicine, Guevara journeyed extensively throughout Latin America. He was disgusted with the poverty and inequalities he encountered along the way and concluded revolution was the right and only answer to bring about social reform. Through the passage of time Guevara had become a revered, reviled and romanticised figure. Just prior to his execution in Bolivia he was asked if he was concerned about his own immortality, to which he answered, "No, I'm concerned about the immortality of the revolution." Che Guevara was shot nine times by Mario Terán, a sergeant in the Bolivian army, the fatal wound being to the chest of the man who became to be known as "El Guerrillero Heroico".
3. Somewhere over the Pacific Ocean on July 2, 1937: "KHAQQ calling Itasca. We must be on you but cannot see you. Gas is running low", was the last confirmed radio transmission of which 39 year old lady?

Amelia Earhart was a true aviation pioneer. Amongst several other firsts, she became the first woman to fly solo across the Atlantic Ocean. In 1937, five years after her record-breaking transatlantic flight, she set out with co- pilot Frederick J. Noonan on an attempt to fly around the world following the line of the equator. What happened to the plane after its take off from Lae, New Guinea in the Pacific is still a mystery.

The radio message to the US Coast Guard ship Itasca, was the last time Amelia Earhart was ever heard.

Despite an extensive search by the navy, no part of the plane was ever recovered.
4. What final two word dying reply did comedian and actor Bob Hope give to his wife on July 27th, 2003 in answer to her enquiry as to where he wanted to be buried?

Bob Hope died two months after his one hundredth birthday. In a career that spanned well over seventy years, English born Hope appeared in around eighty films, including such comedy classics as the "Road To" movies with Bing Crosby, "Paleface" and "Son of Paleface" and my personal favourite "The Lemondrop Kid". Bob Hope also worked extensively with US troops, and for that he became the first honorary veteran of the U.S. armed forces. Hope's final resting place was no surprise, he was buried in the Bob Hope Memorial Garden at San Fernando Mission Cemetery LA.
5. "Don't worry, it's not loaded", were the last words spoken by rock musician Terry Kath as he put a gun to his head on January 23rd 1978 and pulled the trigger, killing himself instantly. Of which American rock band formed in 1967 was Kath a founding member?

The rock band Chicago (which not surprisingly hailed from Chicago) was formed in 1967 and continue to perform to this day. Their mixture of progressive rock and jazz fusion made them one of the most successful American bands of the 1970s and 80s. Terry Kath was a multi-instrumentalist and singer who lived life on the edge and allegedly suffered bouts of depression.

The suicide came eight days before his 32nd birthday.
6. Marilyn Monroe spoke her last known words over the telephone on the night of August 5th, 1962. They were "Say good-bye to Pat. Say good-bye to Jack and say good-bye to yourself because you're a nice guy". To whom was she talking?

English born actor and 'brat pack' member Peter Lawford was married to Pat Kennedy and thus he was the brother-in-law of President John F. Kennedy. He had called Marilyn Monroe at around 7.30 pm. to invite her over for dinner, an offer she declined. Her speech was apparently badly slurred and the conversation was cut short by Monroe after she had made her round of farewells. Lawford tried to call back but was met with a busy signal.

The aftermath of her death is as complex and mysterious as it is distressing but, to this day, very few people know the absolute truth about the demise of Marilyn Monroe - a truly larger than life Hollywood legend.
7. There are a few reported variations, but "My wallpaper and I are fighting a duel to the death. One or the other of us has to go" is generally accepted as being the last words (or very close) of which Irish writer and poet, on November 30th, 1900?

In a lifetime that saw some highs, but also immeasurable lows, Oscar Fingal O'Flahertie Wills Wilde, one of the nineteenth century's finest writers and wits, died of cerebral meningitis at the age of 46, in a rundown Parisian backstreet hotel. His final days were spent in near destitution wandering through the city streets, spending what little money he had on alcohol. Today the tomb of Oscar Wilde can be viewed, along with "the good and the great of European society" in the Pčre Lachaise Cemetery, the largest burial site in Paris.
8. Double murderer Gary Gilmore's last words as he faced a Utah firing squad were: "There'll always be a Meersman". Who or what was Meersman?

It has been erroneously reported that Gary Gilmore's last words were "Let's do it". Not so! That was what he said when asked by Father Meersman, the Roman Catholic prison chaplain, if he had any last words. A short while after, Gilmore spoke again to Father Meersman, saying "Dominus vobiscum" ("The Lord be with you"). The chaplain replied "Et cum spiritu tuo" ("And with your spirit"). Gary Gilmour grinned and uttered the line "There'll always be a Meersman". At 8:07am on the morning of January 17, 1977, five marksmen lined up and efficiently ended Gilmore's life.
9. Legendary actor Humphrey Bogart died on January 14, 1957, aged 57 of esophageal cancer. What were the great man's last words, a reference to his passion for alcohol?


Answer: "I should never have switched from Scotch to Martinis"

Rated the number one male star in the history of American cinema by The American Film Institute, Humphrey Bogart appeared (more often than not as the star) in 75 feature films. It is difficult to select his finest works, though "The Maltese Falcon" (1941), "Casablanca" (1942), "The African Queen" (1951) and "The Caine Mutiny" (1954) are right up there with the best. Bogart, renowned for his love of alcohol and cigarettes, contracted his cancer in the mid 1950's, but did not seek medical attention until it was too late.

He weighed just 36 kilograms when he died. His body was cremated and is interred at Forest Lawn Memorial Park Cemetery, California.
10. On 17 November 1558, which English Queen's final words were: "When I am dead, you will find Philip and Calais engraved on my heart"?

The final words of Mary I were a reference to her husband Philip II of Spain and the French armies taking Calais, the last remaining English possession on the European mainland. Mary I, often known as "Bloody Mary" because of the number of Protestants she had burnt at the stake, reigned for five years until her uterine cancer induced death.

Her younger half-sister Elizabeth I succeeded her on the throne of England.
Source: Author nickdrew55 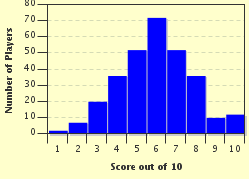