These are the last known words before their death of famous people throughout history. See how many you can get right.

During the course of his reign, Henry VIII had closed down or destroyed hundreds of monasteries, nunneries and friaries throughout his kingdom in order to avail himself of their vast accumulated wealth. Edward VI, his son, died young in 1553, at the age of 15.

Henry VII, father of Henry VIII, died in 1509 after securing the throne for the Tudor dynasty. James I of England was Henry VIII's great-great nephew, descending through the Scottish line into which Henry's sister had married. He died in 1625.
2. Which President of the USA whispered to his wife, "I love you Sarah. For all eternity, I love you" just before his death in 1849?

James Polk was President from 1845 to 1849. His long years in public service had taken a massive toll on his health. He therefore did not seek re-election after his first term and died shortly after. George Washington died fifty years earlier in 1799, Franklin Roosevelt died in 1945, and Benjamin Franklin, though a great man, was never President of the United States.
3. Which German composer of nine symphonies (among many other great works) died in 1827, whispering, "Friends, applaud - the comedy is finished"?

Mozart died earlier than Beethoven, in 1791, and composed an astonishing amount of work, including over 40 symphonies. Schubert, who was Austrian, died a year later than Beethoven, in 1828. Schubert also composed nine symphonies, but is best known for his beautiful Lieder, of which he wrote over 600. Chopin, who died in 1849, was a great master of Romantic piano music, but he was Polish and later took up French citizenship.
4. Who, just before his death from cancer in 1957, remarked, "I should never have switched from Scotch to Martinis"?

During an acting career of thirty years, Bogart appeared in over 70 films, and was one of the most respected figures in cinema. Entertainment Weekly Magazine, in 1997, named him the number one movie legend of all time. Bogart won an Academy Award for his role in the movie, "The African Queen" opposite Katherine Hepburn, but he possibly is remembered most of all for his role as Rick Blaine opposite Ingrid Bergman in the movie "Casablanca". Of the other three actors, James Cagney died in 1986, Buster Keaton in 1966, and W.C. Fields in 1946.
5. Which word did Napoleon Bonaparte utter just before his death in 1821?

Napoleon was a military genius and emperor of France in the nineteenth century. His actions impacted upon all of Europe at the time and echo down through time in the judicial code he established for most of Europe. He married Josephine de Beauharnais in 1796.

This was a love marriage, but sadly, it produced no children. Napoleon, in an attempt to set up a long lasting dynasty, therefore divorced Josephine in 1820 in order to marry Marie Louise the Archduchess of Austria. This produced one child, a son, who became known as Napoleon II, the King of Rome.

He only ruled for two weeks however, and died without issue, of tuberculosis, at the age of 21.
6. Who said, just before she died in 1603, "All my possessions for a moment of time"?

Elizabeth I, Queen of England, was an extraordinary woman. Strong, forthright, determined, a great leader, she yet possessed a deep love of beauty and poetry. These last words of hers are so intriguing - what did she mean I wonder? That she would give all she had to be allowed to live for just a few precious seconds longer? Or did she mean that the great wealth, possessions, and kingdoms she possessed were so insignificant as to only be worth a mere flicker in eternity? Both the Queen of Sheba and Cleopatra lived and died centuries before Elizabeth, and the great Katherine Hepburn lived and died centuries later.
7. Whose words were these, just before her death in 1997: "My God. What's happened?"

Princess Diana was the first wife of Charles, Prince of Wales, and mother to their two sons, William and Harry. She was tragically killed in an automobile accident in Paris in August 1997 when the driver of the vehicle, in which she was travelling, attempted to speed away from the pursuing paparazzi. Actress Jayne Mansfield was also killed in a car accident, but in 1967. Dancer Isadora Duncan was killed in an automobile accident in 1927 when her long scarf became entangled in one of the wheels of a vehicle in which she was a passenger. Wallis Simpson, the woman for whom King Edward VIII of England gave up his throne, died in 1986.
8. Which poet said, "God will pardon me - that's his line of work" just before his death in 1856?

Heinrich Heine was a German poet, most known for his lyric poetry. He lived from 1797 to 1856. Considered one of the most important of the poets from the Romantic era, many of his works have also been set to music. Wordsworth and Coleridge, both English poets, lived from 1770 to 1850 and 1772 to 1834 respectively -- William Shakespeare lived and died much earlier, from 1564 to 1616.
9. "Father, into thy hands, I commend my spirit."

The one and only Jesus Christ, the Son of God, spoke these words just before his death by crucifixion in Israel over two thousand years ago. The Muslim faith, founded in the Middle East, has Allah as its God and Muhammad was his prophet. Their religion was founded in the year 610. L. Ron Hubbard founded the Church of Scientology in 1953 in the USA.
10. Just before her death in 1931, who whispered, "Get my swan costume ready."

Anna Pavlova (1881-1931) was a Russian ballerina who is considered one of the most famous dancers in history. Her most noted role was that of "The Dying Swan," a ballet choreographed by Mikhail Fonkine in 1905 and which today find echoes in Tschaikovsky's beautiful and haunting "Swan Lake." She died with her costume held in her arms, and, in accordance with theatre tradition, in the next show in which she was due to perform, a spotlight circled the empty stage. Margot Fonteyn, another exquisite prima ballerina, died in 1991. Odette was the character portrayed in ballet "Swan Lake" - and Daisy Duck was a prima waddler.
Source: Author Creedy 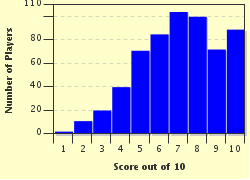