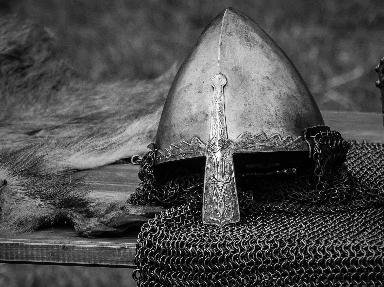 According to historians and archeologists, mankind has been developing and improving the machines of war as a means of defence and attack for over five million years. See how many of these you can get right - before I kill you.

This was used to give the weapon being thrown greater speed and force. The end of the atlatl had a carved out end, into which the butt of the spear or dart was placed, before both were pulled back over the shoulder and flung. Later versions of the atlatl had leather loops attached, to fit it securely over the fingers, thus enabling more force to be applied to the throw.
2. Used by the early Greeks in warfare, what was a ballista?

Used in siege warfare, the ballista was similar in principle to a catapult, but much larger. It was dragged along on horse drawn carts to where it was to be used. The springs that gave impetus to the throwing force consisted of several loops of twisted skeins around a rigid cross beam.

When suddenly released, the weapons being used (large darts or rocks etc) were hurled, with great force and velocity, towards the enemy's position.
3. What was a cataphract horse?


Answer: A horse clad from top to bottom in armour

Ridden by an armoured clad soldier or knight, the cataphract horse was an unfortunate creature also clad in armour. These horses had to be particularly strong to carry such a load, and, more often than not, draught horses were selected for this inglorious task. The poor things would have hardly the strength left to get up a whinny.
4. Used during warfare in the Middle Ages, what was a pike?


Answer: A long thrusting weapon on the end of a long pole

The pike could be up to six metres long, and was normally made of wood. It had an iron or steel spearhead that was usually reinforced with metal pieces. Strong wood was needed when making pikes to prevent them sagging with the weight of the metal on the end.

These weapons were not thrown at the enemy but used by foot soldiers at closer quarters. However, they were unwieldly in very close combat, so soldiers would usually switch to other weapons at this stage of a battle.
5. Which country perfected the use of the repeating crossbow in warfare?

A repeating crossbow used the one action to string, load the arrow and shoot. The normal crossbow required several movements each time a projectile was fired. Such was the efficiency of this weapon that it was last used in battle in 1895.
6. What invention led to the use of chariots in battle?

The spoked wheel was first used by the Andronovo people. This was a bronze age civilisation from the Asiatic Steppes region. It existed between 2300 and 1000 BC. Prior to this, wagons or carts with solid wooden wheels were usually dragged along by oxen in battle.

As you can imagine, these were clumsy and hardly operated at lightning speed. Chariots were light, horse drawn and far easier to handle.
7. Though spasmodically used in primitive form earlier, which period saw the mass introduction of firearms and rockets into European warfare?

The Renaissance, a period of time from the late Middle Ages until the end of the 17th century, saw a rebirth of learning in every form, many social advances, astonishingly beautiful artistic works, and amazing inventions. Sadly though, this included the invention of more efficient weaponry as well.
8. Which was the first fully automatic machine gun?

The Maxim, with full automatic fire and reloading, was invented in 1884. Variations of the machine gun had been invented before this but were either not developed further or were still not fully automatic. The Gatling gun, which was patented by Richard Gatling in 1861, was the precursor of the machine gun we know it today.
9. Which century saw warships change from sail power to steam engines?

Sailing ships were replaced by steam ships in the battle arena at sea from the 1850s. This led to the eventual development of battleships, cruisers, and aircraft carriers. Naval warfare armaments also improved from this period onwards. And Davy Jones rubbed his hands together with glee.
10. Which war first saw the introduction of armed aircraft as a weapon?

World War I saw the art of war change. Many technological advances in the mechanics of warfare were made. These included armoured cars, aircraft, tanks, automatic rifles, hand grenades, high explosive shells and poison gas - just to name a few. Of course, depending on one's point of view, applying the term "art" to such a deadly reaper of souls is hardly flattering.
Source: Author Creedy 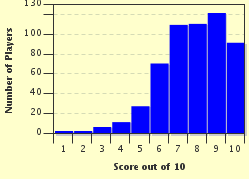