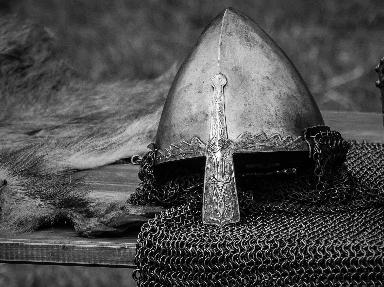 A look at warfare from Ancient to modern times ....
There are 1,023 quizzes and 10,230 trivia questions in this category.

A new quiz every hour! Over 10,230 questions in rotation. Recent Scores

Peace on Earth, Good Will to Men?

10 questions
Average, 10 Qns, guitargoddess, Dec 06 09
This quiz is all about wartime Christmases during the 20th century, including examples from WWI, WWII, Korea and Vietnam. In some cases, the spirit of good will toward men was remembered, in some it was not.
Average
guitargoddess

The Dogs of War

Tales of the War Elephant

10 questions
Average, 10 Qns, ponycargirl, Jun 16 20
In ancient times war elephants were used for shock attacks, and their very presence on the battlefield brought fear and panic to those who did not have them.
Average
ponycargirl

Tales of the War Pigeon

10 questions
Average, 10 Qns, ponycargirl, May 14 20
I have heard of war elephants, war horses, and war dogs, but are there really war pigeons? Are you serious? Yes, I am! Pigeons that carry messages are called post pigeons, and when they carry messages during war they become war pigeons!
Average
ponycargirl

Boots on the Ground

10 questions
Average, 10 Qns, skunkee, Apr 21 14
In slang usage 'Boots on the Ground' means being or going someplace. In military speak it refers to the number of troops in position. These places where I've had my boots on the ground have all seen significant battles.
Average
skunkee

A to Z of Battles

25 questions
Average, 25 Qns, Plumbus, Aug 27 05
Can you identify these famous battles as they appear from A-Z? You are given each battle's first letter, its year and the conflict in which it was fought, plus a brief description. Most of the information is taken from the 'Leaders and Battles Database'.
Average
Plumbus

They Shall Not Pass

10 questions
Average, 10 Qns, rossian, Apr 24 13
This quiz covers some of the famous 'last stands' over the centuries, when the defenders stood firm and said 'they shall not pass'.
Average
rossian

If Only They Disobeyed Orders

10 questions
Average, 10 Qns, Correspondguy, Dec 31 09
Generally, you want the military to obey orders. But sometimes the orders are dumb, suicidal, or horrific, and then you want more than blind obedience. This quiz, the result of an author challenge by Buddy1, asks about that particular situation.
Average
Correspondguy
Dec 31 09
4581 plays
9.

10 questions
Average, 10 Qns, rossian, Nov 06 11
The siege has been a standard tactic in warfare throughout history. This quiz covers some of the best known.
Average
rossian

Heroes and Villains of War

15 questions
Average, 15 Qns, Oddball, Mar 01 00
It is said that confrontation introduces a man to himself. The history of warfare has made heroes and villains of men and women throughout time. Here is a quiz dealing with only a partial group of those who should be remembered for bad as well as good.
Average
Oddball
Mar 01 00
17907 plays
11.

10 questions
Average, 10 Qns, SisterSeagull, Oct 20 15
This quiz takes a look at some of the most famous quotes made by leaders, commanders and soldiers both on and off the field of battle throughout history.
Average
SisterSeagull

20 questions
Difficult, 20 Qns, spanishliz, Apr 17 02
Most questions require you to choose which event was the first to happen. Sometimes you will be asked to identify the conflict in which something was first used. Questions range from late eighteenth to late twentieth century.
Difficult
spanishliz

20 questions
Very Difficult, 20 Qns, pshelton, Nov 24 07
War is common in human history, and there have always been women who actively participated in this predominantly male activity. See if you can identify some of the brave women.
Very Difficult
pshelton

10 questions
Average, 10 Qns, rossian, Jul 06 12
Many places suffer during wartime, but those which suffer most are the ones which are in strategic locations. This quiz covers a wide range of wars, with the questions based on the places which really became a 'tug of war'.
Average
rossian

Airpower In The Two World Wars

Women and War - The Crimea to WWII

15 questions
Difficult, 15 Qns, Macjaq, Oct 09 10
This quiz highlights the stories of a several women who engaged in or resisted conflict between 1853 and 1945. It includes some relatively easy questions and some which should be challenging.
Difficult
Macjaq
Oct 09 10
990 plays
17.

10 questions
Average, 10 Qns, tazman6619, Nov 24 11
Capt. Ed Murphy, a noted military historian (not really just go with it), is the man behind Murphy's Laws of Combat. This quiz is his final exam that all West Point graduates must pass. Do you have what it takes to be a member of the Long Gray Line?
Average
tazman6619

The War of Jenkins' Ear

10 questions
Tough, 10 Qns, trammgr, Nov 20 04
Why is it that all the interesting stuff in history is learned after you leave school? Allow me to bend your ear (sorry) about a man named Jenkins and the furor over his.
Tough
trammgr

History of the World STOP By Telegram STOP

10 questions
Average, 10 Qns, nannywoo, Nov 18 13
Imagine the telegraph messages that could have been sent after some of the most influential battles in history! Then, answer the questions, which are not in chronological order.
Average
nannywoo

10 questions
Average, 10 Qns, minch, Jul 03 00
Here are some questions on battles, from one fought by the Ancient Greeks to one in World War I. What do you know of them?
Average
minch

10 questions
Average, 10 Qns, CmdrK, Jul 20 18
Armored fighting vehicles entered combat in World War I. Though seemingly invincible, there was often a lot of "scrapped metal" left in the battlefield after combat. Can you identify all of these large tank battles of the 20th century?
Average
CmdrK

10 questions
Difficult, 10 Qns, huw27, Feb 13 09
"Charge!" by Justin Pollard is an anthology of some strange tales in Military History. You don't have to have read the book to score well and enjoy this quiz - a lively imagination will be a good help as well!
Difficult
huw27
Feb 13 09
1689 plays
24.

10 questions
Easy, 10 Qns, spanishliz, Mar 27 16
The motivational catchphrase "Keep Calm and Carry On", derived from a WWII propaganda poster, became familiar in the early 21st century. This quiz asks you to complete or provide other such phrases from posters produced in both world wars.
Easy
spanishliz

10 questions
Easy, 10 Qns, Creedy, Oct 21 14
Do you know these great military leaders who have taken their countries to great heights? I'll give you three clues for each, either serious or ambiguous. See if you can work out each answer. Good luck.
Easy
Creedy

10 questions
Tough, 10 Qns, klinski_1987, Feb 18 16
This quiz was inspired by a discussion about the difficulty of invading Russia. The following questions concern various attempts at doing just that. Enjoy!
Tough
klinski_1987
Feb 18 16
318 plays
27.

Stick 'Em Up - Evolution of Weapons

10 questions
Average, 10 Qns, Creedy, Oct 24 09
According to historians and archeologists, mankind has been developing and improving the machines of war as a means of defence and attack for over five million years. See how many of these you can get right - before I kill you.
Average
Creedy

The Greatest (but not about Ali)

10 questions
Difficult, 10 Qns, richbowling, Aug 09 09
This quiz is my first and deals with some of the greatest commanders in military history.
Difficult
richbowling
Aug 09 09
1557 plays
29.

You Sank My Battleship

10 questions
Difficult, 10 Qns, brisgooner, Feb 03 08
A short quiz about the fate of battleships and battlecruisers from different navies during the 20th Century.
Difficult
brisgooner
Feb 03 08
2664 plays
30.

But One Life To Give

10 questions
Average, 10 Qns, tazman6619, Jun 08 12
This quiz will focus on famous deaths that came in times of war throughout the ages. Can you identify these men or the circumstances of their deaths from the clues given?
Average
tazman6619