Throughout history there have always been people who became famous for the way in which they died rather than how they lived. See if you know who they are.

Quiz Answer Key and Fun Facts
1. Chrysippus, who was a Greek philosopher, died in what manner?

Chrysippus's specialities as a philosopher were logic, ethics, knowledge and physics. Apparently he had a well developed sense of humour as well. The story is that he and his friends one day managed to get a donkey intoxicated by giving it pure wine to drink - and then gave the donkey some figs to try to eat. Watching the poor animal trying to achieve this feat caused so much merriment in Chrysippus that he died from laughing so heartily.
2. In 162 BC, one Eleazar Maccabeus, died in which manner during a battle?


Answer: An elephant fell on him

Maccabeus was fighting at the Battle of Beth-Sechariah between the Jewish Maccabeans and Greek forces. The silly dill rushed underneath an elephant which he thought was carrying one of the leaders of the opposing army, and speared the poor beast in the stomach in an attempt to bring it to its knees to dislodge the rider. Unfortunately his aim was all too accurate and he killed the animal instantly - whereupon it promptly fell on him and crushed him to death.
3. How did Roman senator Lucius Fabius Cilo die in AD 212?


Answer: Choked on a hair in a glass of milk

This unlucky man was a Roman general and politician. He was also one of the richest men in Rome at the time and - apart from his unusual death - is most famous for for being saved from a mob massacre by Caracalla, one of the most tyrannical Roman emperors of all.
4. How did Attila the Hun die in 453 AD?


Answer: Haemorrhage on his wedding night

Atilla was ruler of the Huns from 434 until he died. His empire was vast, ranging from the steppes of Central Asia to the Danube River and the Baltic Sea. A ferocious and cruel man, he is known throughout history as a total barbarian by most of the peoples he conquered.

However, in Hungary and Turkey and some countries in central Asia, he is seen as a great ruler. Historical perspective depends on who is writing that history it seems.
5. In 1478 during the War of the Roses, George, the 1st Duke of Clarence, died under what circumstances?


Answer: Drowned in a barrel of wine at his own request

The Duke of Clarence was the third son of Richard, the third Duke of York. He took part in the many machinations involved in the War of Roses between the two royal houses struggling for control of England at that time. He played a dangerous game in this struggle, switching sides several times, so his subsequent execution proved to be no surprise.

But requesting to drown in a barrel of alcohol?
6. In 1513, Gyorgy Dozsa, leader of a peasants revolt in Hungary, died in which manner?


Answer: He was roasted alive

This is a gruesome tale. As punishment for leading the rebellion, the unfortunate Gyorgy Dozsa was forced by the landed nobility he had revolted against, to sit on a red hot 'throne' and had a red hot crown pressed on his head and a red hot sceptre forced into his hand.

As his body slowly roasted, six other rebels were, so it is said, forced to eat portions of his flesh. Even by the standards of the time - the heyday of cruel and unusual punishments - this was a singularly revolting execution.
7. In 1649, how did Sir Arthur Aston, a Royalist commander in Ireland at the time, die?


Answer: Beaten to death with his wooden leg

This occurred during the Siege of Drogheda, in a battle between Cromwell's English invaders and the defending Irish townspeople who were led by Aston. Cromwell's soldiers, on capturing this unlucky man, thought his wooden leg contained gold coins and beat him to death in an attempt to split the leg apart. He attempted to escape but had trouble legging it out of there.
8. How did French playwright and actor Moliere die in 1673?


Answer: He fell ill while performing in one of his own plays and died shortly afterwards

Following a violent tuberculosis related coughing fit on stage, Moliere, who is considered one of the greatest writers of comedy in the history of western literature, died a short time later. He would have appreciated the irony of his death. The title of the play in which he was performing was "The Imaginary Invalid".
9. In 1771, how did King Adolf Frederick of Sweden die?


Answer: He ate himself to death

This greedy man met his death following a meal of several large helpings each of "lobster, caviar, sauerkraut, smoked herring, champagne, and fourteen (yes, 14) servings of his favourite dessert". The dessert was semla, which is a generous sized cream filled pastry. King Piggy Wiggy had these floating in bowls of warm milk. Today he is rightly known by all Swedish children as "the king who ate himself to death".
10. In 1942, how did thirty-two men die aboard the British cruiser HMS Trinidad?


Answer: The ship accidentally torpedoed itself

This tragic event occurred when the Trinidad was serving in the Arctic. When launching a torpedo attach against a German destroyer, one of the torpedoes had a faulty piece of equipment. When it was fired, it turned around in an wide circle and headed back to the ship and hit it instead, occasioning the loss of the thirty-two men.

The Trinidad was towed clear and, after being saved along the way by the HMS Fury from a German submarine, managed to make it back to Murmansk base where she was partially repaired. Setting off to return to Britain, she survived attacks from more than twenty bombers along the way. All missed except one, and another sixty-three men died.

The damage from this attack was such, that it was decided to scuttle her, and the HMS Matchless torpedoed this unlucky ship, sending it to the bottom of the Arctic Ocean.
Source: Author Creedy 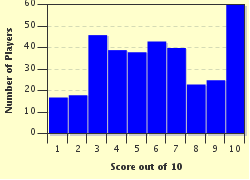