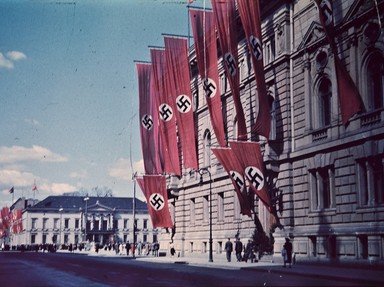 Hitler - The Making of a Dictator Quiz

This is the second in a series of quizzes on WWII figures. Hope you enjoy it.

The surname of Hitler's father was originally Schicklgruber, but he changed it to Hitler in 1876, thirteen years before the birth of his son, Adolf. His father was a customs official of the Austro-Hungarian Empire. Hitler was born into comfortable circumstances and sent to good schools, but he failed to distinguish himself in his early life.
2. Where was Hitler born?

Although Hitler showed no great talent at anything during school, one of his teachers later remembered him as a "gaunt, pale-faced youth ... arrogant and bad-tempered". The teacher said he "demanded of his fellow pupils their unqualified subservience, fancying himself as a leader".
3. How old was he when he left school?

Hitler tried being an artist in Vienna in 1908, but failed miserably and was mainly supported by female members of his family. To what extent his intense, obsessive anti-Semitism dated from his years in Vienna is a matter of controversy.
4. Why was Hitler hospitalised during WWI?


Answer: He had been gassed

In 1914 he was promoted to the rank of lance-corporal. Hitler is quoted as saying war came to him "like a redemption from the vexatious experience of my youth ... In a transport of enthusiasm, I sank down on my knees and thanked Heaven from an overflowing heart".

During the Battle of the Somme in October 1916 Hitler received a wound in his left thigh when a shell exploded at the entrance to the dispatch runners' dugout. He begged not to be evacuated, but was sent for almost two months to the Red Cross hospital at Beelitz in Brandenburg.
5. How many years did Hitler spend as a runner on the Western Front in WWI?

Hitler moved to Munich in 1913 and joined the 16th Bavarian Reserve Infantry alongside Rudolf Hess, at the start of WWI. The shock of Germany's defeat in 1918 gave him a permanent hatred for the democratic politicians whom he labelled "the November Criminals" and "the originators of this dastardly crime".
6. What award did Hitler receive for his service in WWI?

In 1921, Ernst Roehm created a 2000-strong paramilitary force of stormtroopers. These stormtroopers were known as the "Sturmabteilungen", the SA and the "Brownshirts". The SA was made up of various miscreants and did the 'dirty work' of the Nazi Party.
8. What was the nickname of the Munich Putsch which was an attempt to gain power that landed Hitler in prison?

Anton Drexler was the founder of the German Workers' Party in 1919. This later became known as the Nazi Party (National Socialist German Workers' Party) under Hitler. The swastika that Hitler chose as a symbol for the party was originally a religious symbol that is now synonymous with evil.

It had been used since about 1919 by various extreme German nationalist organizations, in particular the Marine-Brigade-Ehrhardt.
9. Hitler dictated "Mein Kampf" to which fellow prisoner?

In the nine months that Hitler spent in prison, he wrote the first volume of "Mein Kampf". Historians have since noted that he fabricated much of his childhood memories and several other stories during the writing of his now infamous book.
10. Hitler held dual citizenship of Austria and Germany up until his death.

Hitler heartily disliked being an Austrian citizen, and in 1925 even went so far as to make himself stateless by renouncing it. He did not obtain German citizenship till 1932. Hitler was a brilliant public speaker. Hitler found it very easy to bring a German rally to the point of hysteria, and used this to his advantage.

After his release from prison, he went on speaking tours throughout Germany as part of his project to consolidate and enlarge the Nazi Party and improve its electoral position.
Source: Author natz1027 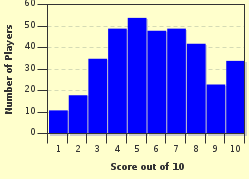 
Other Destinations
Explore Other Quizzes by natz1027