This quiz concerns people with either first or last names of Huey, Dewey, or Louie who might have been called that by relatives or friends.

Quiz Answer Key and Fun Facts
1. Libraries use a system of classification of books devised by a man in 1876 whose first name was Melvil. What was his last name?

Melvil Dewey was a librarian who had the task of organizing the library at Amherst College. He used a decimal system which he supposedly developed from writings of Roger Bacon, a system he copyrighted in 1876. Although many libraries now use the Library of Congress system, the Dewey Decimal System is still in wide use.

Dewey was a leader in developing Lake Placid as a cultural and recreational center. He also tried to up-date English language spelling. In 1927, for instance, he arranged a menu of Hadok, Poted beef with noodls, Parsli or Masht potato, Butr, Steamd rys, Letis, and Ys cream and added "All shud see the butiful after-glo on mountains to the east just befor sunset. Fyn vu from Golfhous porch." His given name was Melville which he changed to Melvil. Also, his middle name was Louis.
2. Braille is given credit for inventing the Braille system which allows the blind to read by means of six dots embossed on paper. What was the first name of this man?

Braille was blinded accidentally by playing with his father's saddle making tools. One eye was punctured and an uncontrolled infection lead to the loss of the other eye. He was sent to a home for the blind which was very primitive. He did show academic potential and proved to be an able scholar. His first accomplishments were in the area of music.

There was at that time a primitive form of embossed writing but the books were often too heavy to even carry. Using the image of the six dot die, he was able to to create a written alphabet that brought knowledge and independence to the blind. The system was not adopted until 1854, two years after his death.

In is often believed that all blind persons can be taught braille. However, blindness caused by some diseases, such as diabetes, leave some without sufficient sensitivity on the fingers to benefit.
3. Which Dewey was a racket-busting prosecuting attorney who ran unsuccessfully for President twice, losing both time?

Dewey was hired as a special prosecutor in New York and was successful in convicting several high profile criminals. Later he became Governor of New York. In both 1944 and 1948 he lost bids for presidency on the Republican ticket; first to Franklin Roosevelt as the nation chose not the change leadership in the midst of World War Two and again in an upset win by Harry Truman. Dewey was in the more liberal wing of the party and was not popular with more conservative leaders such as Robert Taft.
4. This English actor/comedian shed his accent to become, on television, a grumpy curmudgeon of a physician. Which Hugh is it?

Laurie achieved recognition through the successful British television ventures "Blackadder" and "Jeeves and Wooster". His greatest success has been the American television program "House", for which he has received many nominations and awards. Gregory House is an equal opportunity specialist in put-downs and insults for patients, friends, fellow workers, and pompous authority figures, in spite of his addiction to pain killers.
5. Who organized, along with Bobby Seales, the protest group that called itself the Black Panthers?

Newton was the titular head of the most aggressive Black Power group of the 1960s-1980s. Newton's life was filled with controversy. In 1967 he was convicted of the death of John Frey but had his conviction overturned by the California Supreme Court. He was tried twice more until the prosecution finally gave up.

In 1974 he was arrested for the murder of Kathleen Smith but had the case dismissed for lack of evidence. The Black Panthers were thought to have been the cause of the death of a key witness.

Again, in 1977, he was alleged to have pistol-whipped Preston Collins to death. In this instance he fled to Cuba to avoid prosecution.

The Black Panthers' initial goal was to protect black citizens from police brutality but became a focal point for black militancy. J. Edgar Hoover labeled the Black Panthers as the most dangerous group in America.

In 1989 Newton was shot in the street by a rival Black Power group member.
6. What piano playing rock-and-roller had giant hits with "Great Balls of Fire" and "Whole Lot of Shakin' Goin' On"?

Jerry Lee Lewis, along with his cousins Mickie Gilley and Jimmy Swaggart, became pop icons in their era; Mickey as a country/western star and night club owner and Jimmy as a dynamic but disgraced minister.
7. He was not the inventor of the so-called 'sexual revolution' but he was its most dedicated advocate. He created a media fortune with his magazine and related enterprises. What was this Hugh's last name?

Hefner worked for Esquire Magazine until, after a dispute over wages, he began his own magazine with a small bank loan, a loan from his mother, and a few sponsors. Thus Playboy was brought into the world. The first undated issue featured the famous Marilyn Monroe calendar pose on the front and sold 50,000 copies. From there it went on to night clubs, television, and an assortment of related merchandise.

The Playboy Mansion is a gathering place for an array of celebrities.
8. Charles Lutwidge Dodgson led us through magic lands. He made us dream of 'Wonderland' and 'Through the Looking Glass'. By what name do we know him?

Carroll or Dodgson was a multi-talented man. Besides his fertile imagination, he was a mathematician, logician, Anglican deacon and photographer. His works have stimulated the minds of children and adults for over a century.
9. He was a Methodist minister who also was an actor. An unassuming man, his greatest success was as the television father of Wallace and Theodore. Who was he?

Aside from "Leave It To Beaver", most of the roles he received were very small ones and in most he is uncredited. When he left show business he moved to Minnesota and ran a Christmas Tree farm.
10. He was, first of all, a philosopher and psychologist but became one of the most respected and influential educational reformers. Whose book "School and Society" (1900) changed the thinking of pedagogues everywhere?

An oversimplification of Dewey's thoughts on education might be this: There is more to a school that readin', ritin' and 'rithmatic. The school is where our culture and beliefs are passed on and where a democratic society must evolve. It must involve the child in her/his own education to lead to fulfillment.

A number of so-called progressive schools were formed by well-intentioned followers that Dewey was later to disavow. But this does not detract from Dewey's profound influence.
Source: Author Rehaberpro 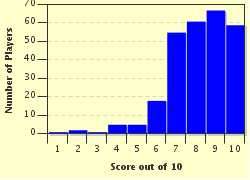