Screw the Rules, I Have Money Trivia Quiz

Wealthy people have committed a vast array of crimes because they thought they could get away with it. This quiz is about these criminals and the crimes they committed.

Quiz Answer Key and Fun Facts
1. I won the the Heisman Trophy in 1968 and had a successful career in the NFL. I starred in the 1974 film "The Towering Inferno", the "Naked Gun" films and television ads for Hertz rental car company. I was acquitted of the murder of my ex-wife and her friend Ron Goldman. I was convicted of felony armed robbery and kidnapping in Las Vegas, Nevada. Who am I?

Orenthal James "O. J." Simpson had a successful football career and a profitable movie career. He was acquitted of the murder of two people after a lengthy and a highly publicized trial. He was convicted of crimes in Las Vegas, Nevada after trying to rob sports memorabilia at gunpoint.
2. I made a fortune in the hotel and real estate industry. I built a reputation for my tyrannical behavior which earned me the nickname "Queen of Mean". I refused to pay a construction company for renovating my new mansion which led to a tax evasion investigation. I eventually got arrested for income tax evasion because "only the little people pay taxes". Who am I?

On August 30, 1989, Leona Helmsley was convicted on conspiracy to defraud the United States, tax evasion, filing false personal tax returns, assisting in the filing of false corporate and partnership tax returns and mail fraud. She was investigated for these crimes after failing to pay for renovations on her $11 million mansion in Greenwich, Connecticut.
3. I made money as an actress performing in such movies as the 1988 film "Beetlejuice",the 1989 film "Heathers" and the 1990 film "Edward Scissorhands". In 2001, I was arrested on shoplifting charges in Beverly Hills, California for stealing merchandise at a Saks Fifth Avenue department store. Who am I?

Winona Ryder has been acclaimed, high earning actress since 1986. Her career struggled after an arrest for shoplifting $5,500 worth of merchandise in a Beverly Hills, California department store on December 12, 2001. A year after this arrest, she was sentenced to probation, community service, fines, restitution to the Saks Fifth Avenue store and ordered to attend counseling.
4. I made money as a home decorating guru who had a television and magazine titled "Living". In 2004, I was convicted of securities fraud relating to the ImClone stock insider trading case. Who am I?

Businesswoman Martha Stewart founded her company Martha Stewart Living Omnimedia in 1997. She also hosted the television shows "Martha" and "Martha Stewart Living". She was convicted of securities fraud and obstruction of justice in 2004 as part the ImClone stock insider trading case.
5. I made my fortune as the CEO of the Death Row record label. I once dangled rapper Vanilla Ice over a hotel balcony over a royalties dispute. I also threatened to assault the heads of the Ruthless Records record label with lead pipes and baseball bats to convince them release the contracts of several rap artists. I've been arrested seven times between 1987 and 2015. Who am I?

Suge Knight is a former football player for the Los Angeles Rams and the CEO of the Death Row record label. The Death Row record label began to struggle financially from 1996 as Knight began a having string of legal battles and arrests. Eventually Knight's erratic behavior led the record label to bankruptcy in 2006.
6. Our father was a rich corporate executive. We decided to murder our parents on August 20, 1989 in Beverly Hills, California. The motive for the murder was believed to be to receive a large inheritance. We claimed during the trial that we were sexually and psychologically abused by our parents. Our defense didn't work and we were sentenced to life in prison. Who are we?

After Lyle and Erik Menendez murdered their parents, both brothers were seen having lavish sprees. Eventually, they were convicted of two counts of first-degree murder and conspiracy to commit murder for the murder of their rich parents. The brothers claimed parental abuse during the trial.
7. I made a lot of money as a television spokesperson for Subway restaurants. In 2015, I had to plead guilty for having inappropriate relations with minors. My house was raided by the FBI after evidence of my misconduct was found on my friend's computer. Who am I?

Jared Fogle was a television spokesperson for Subway restaurants from 2000 to 2015. Jared Fogle established the Jared Foundation in 2004 to raise awareness to childhood obesity. Fogle pleaded guilty to charges related to inappropriate relations with minors on November 19, 2015.
8. I was the heir of fortune from my family's large chemical company. During the 1980s, I established an amateur wrestling facility at my family's Foxcatcher Farm in Pennsylvania. In 1996, I killed Olympic wrestling gold medalist Dave Schultz on the estate. I pleaded insanity during the murder trial but the courts convicted me of third degree murder. Who am I?

On February 25, 1997, John du Pont became the first person on the Forbes 400 richest Americans list to be convicted of murder - for the death of Dave Schultz. John du Pont pleaded insanity in court. The court ruled du Pont to be mentally ill but not insane leading to the guilty conviction. He died in prison on December 9, 2010. His life was the subject of the 2014 movie "Foxcatcher".
9. I made my fortune as a record producer. I developed the "Wall of Sound" recording music production formula at the Gold Star Studios during the 1960s. I was convicted of second degree murder for the 2003 death of actress Lana Clarkson. I claimed the death was an "accidental suicide" even though we were both in my mansion at the time of the death. Who am I?

Record producer Phil Spector was convicted of second degree murder for the death Lana Clarkson. The death occurred in Spector's mansion on February 3, 2003. An hour after Spector and Clarkson entered the mansion, their driver heard a gunshot. Spector was then seen exiting the back door of his mansion with a gun in his hand. Spector later claimed the death as an "accidental suicide".
10. I was the starting quarterback for the Atlanta Falcons between 2001 and 2006. In 2006, I became the first quarterback to run for over 1,000 yards in NFL history. In 2007, I pleaded guilty to federal charges for unlawful interstate dog fighting for my participation in the Bad Newz Kennels dog fighting ring. Who am I?

Michael Vick played for the Atlanta Falcons between 2001 and 2006 and three other NFL teams between 2009 and 2015. Between 2007 and 2009, Vick was either on trial or in jail for his participation in the Bad Newz Kennels dog fighting ring.
Source: Author workisboring 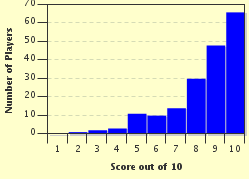 Related Quizzes
1. Murder Trials of the Century Average
2. Scary Marys Average
3. Before They Were Infamous Average
4. America and the Death Penalty: 19th Century Tough
5. You Have The Right to Remain Tough
6. Executions in Britain Tough
7. British Poisoners Tough
8. Escapes From Alcatraz Very Difficult