Names have been linked to countless stories, good and bad. Here are some that will give you nightmares !

Quiz Answer Key and Fun Facts
1. Who was known as "Bloody Mary"?


Answer: Mary I Queen of England

Mary I of England, was the only child of Henry VIII and Katherine of Aragon, who was Catholic. Mary was crowned queen after the death of her half brother Edward VI, taking the throne from Lady Jane Grey, and having her beheaded. She felt threatened by many people due to her religious beliefs as a Catholic and as a result had 280 people burned at the stake during her five year reign, which is why she became known as "Bloody Mary".
2. Who was "Typhoid Mary"?

It was discovered that she was the connection. She was put into isolation twice but never showed the signs herself. An autopsy was performed after her death, due to complications following a stroke and it was revealed she had live typhoid bacteria in her gallbladder.

A total of 51 people contracted typhoid due to direct or indirect contact with her, three of whom died.
3. In 1692 Mary Easty was hanged, but for what crime?

1692, Salem Witch Trials. Mary Eastey was a well respected member of the community when several young women accused her of witchcraft. She of course denied the charges but several more came forward and said they had seen her in the company of the devil. As in the case of many others accused, her denials fell on deaf ears. She was sentenced to hang.
4. Mary Surratt was tried, convicted and sentenced to death for conspiracy to do what?

Mary, her husband and her son were Confederate sympathizers. They would allow meetings to take place in their boarding house where the plans to assassinate Abraham Lincoln were made. Present were: Dr.Samuel Mudd, John Wilkes Booth, George Atzerod, Lewis Powell, John Lloyd, David Herald, and Mary's son and husband. John Wilkes Booth was shot and killed trying to escape after Lincoln's death, while she along with her husband and the others were tried, found guilty and sentenced to death (her husband died after suffering a stroke). Mary was the first woman to be executed by the U.S. Government.
5. Why was Mary, Queen of Scots beheaded?

Mary I Stuart, Queen of Scots (reigned as queen regnant of Scotland from 1542 to 1567) was the daughter of James V of Scotland and Mary of Guise. Upon the death of her father she was crowned Queen when she was six days old and was sent to a convent in France. She married the Dauphin of France and was Queen (consort) of France from 1559-1560, when her husband died. She married two more times.

In 1567 a rebellion by 26 (mainly Protestant) Scottish nobles deposed her as Queen of Scotland and she was imprisoned in Loch Leven Castle. However, she escaped and fled to England. Her presence in England was an embarrassment and a threat to her cousin, Queen Elizabeth I, as she claimed to be the rightful Queen of England. Worse still, she became the focus of Roman Catholic plots to remove Elizabeth I from the throne. When evidence emerged showing her to be a party to one of these plots, she was tried and put to death in Fotheringhay Castle in 1587.
6. Why was Mary Bell sent to prison at the tender age of 12?

Mary Bell was abused, both physically and mentally, by her mother (a prostitute) and by her mother's clients. She was sexually assaulted as well. Mary and a friend lured two small boys into derelict houses whereupon they killed them. Mary went back later and carved an M in the four year old's stomach and mutilated his genitals.

After being caught she confessed but showed no regret or remorse. She was only eleven, but was sent to a psychiatric hospital were she would spend 18 years. She was released in 1980 and had a child of her own and is now reportedly a grandmother.
7. Mary Cotton was executed for which crime?

She was convicted of murdering her step-son, Charles but it is believed that she also murdered three of her four husbands, and eleven of her own 13 children. It is also believed that not only did she kill her brother and sister-in-law, but may have murdered as many as 21 people.

She was sentenced to hang but the execution was botched and she strangled to death because the rope was too short.
8. Why was Mary Jane Fiesta Velosa sentenced to death?

A migrant worker from the Philippines, she was arrested when her luggage was searched and officials found 2.6 kilos of heroin. She was also charged with prostitution, and was sentenced to death by firing squad. Her trial made international news. There were 250,000 signatures from 125 other countries protesting the sentence.

She spent five years in prison. She received a stay if she would testify regarding the others she was traveling with on the charges of human trafficking,and transporting heroin.

She was freed and the ones whom she testified against were executed by firing squad.
9. Who was named "The Michigan Strychnine Saint"?

Dubbed "Michigan's Strychnine Saint", because strychnine was her method of killing. It is believed that she killed 18 people including several of her own children. She would visit a "sick" friend and slowly feed them strychnine and they would die within hours. She was eventually caught and convicted of murder and sentenced to death but would only confess to three counts.
10. Why was Mary Parker hanged in 1692?


Answer: Being a witch

She was tried in the Salem Witch Trials of 1692, after some of the people in the village declared her to be a witch. She claimed it was mistaken identity; there were four others named Mary Parker in the surrounding area. They became more convinced when a man named William Baker Jr. said he saw her dancing with the devil. I quote, "she rod upon a pole and was baptized at 5 mile pond".

He was also found guilty of witchcraft. Both were hanged. They were just a few of the 185 to be accused of witchcraft; 156 were formally charged of which 47 confessed.

There were 19 executed, one by being pressed to death.
Source: Author chris1162 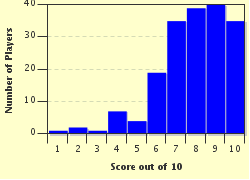 Related Quizzes
1. Murder Trials of the Century Average
2. Screw the Rules, I Have Money Easier
3. Before They Were Infamous Average
4. Escapes From Alcatraz Very Difficult
5. America and the Death Penalty: 19th Century Tough
6. You Have The Right to Remain Tough
7. Executions in Britain Tough
8. British Poisoners Tough


Other Destinations
Explore Other Quizzes by chris1162