Each of these famous folks was born and died within one of the ten centuries listed. Can you match these people of the second millennium with the century in which they spent their living years?

Karl Marx was born in Trier, Germany (Prussia, at the time) in 1818 into a wealthy and educated family of Jewish heritage. He studied law in Bonn and Berlin at his father's request, but his real interest was philosophy, and he ended up receiving his doctorate from the University of Jena with the philosophical thesis, "The Difference between the Democritean and Epicurean Philosophy of Nature".

His writings were considered too radical to allow him to obtain a university teaching position so he instead worked as a journalist.

He was briefly the editor of a newspaper in Germany before it was suppressed by the government; he then moved to Paris (where he met Friedrich Engels) and to Brussels where he began to formalize the philosophy which would become known as Marxism. "The Communist Manifesto" was published during this time; shortly thereafter he was expelled from Belgium and ended up in London where he published the first volume of "Das Kapital" in 1867.

The remaining two volumes were published by Engels after Marx's death in 1883.
2. Francis Drake, English explorer and privateer

A controversial figure in history, Sir Francis Drake was either a hero or a scoundrel, depending on your point of view. He was born in Devon, England, circa 1540 and as a young man was apprenticed to a sailing merchant. He eventually commanded his own ship and worked as a slave trader, picking up slaves in Africa and selling them in the Spanish colonies in the Americas which violated Spanish law. An attack by Spanish forces cost Drake many of the men on his ship and embittered him against the Spanish.

He petitioned for a privateer's license from Queen Elizabeth I which permitted him to capture any property belonging to King Philip II of Spain, and he then embarked on a series of raids on Spanish properties in the New World. After a successful raid on Panama, Drake was sent on an expedition to look for a Northwest passage and then on a trip across the Pacific and back to England, making him the first Englishman to circumnavigate the globe. Drake was then called upon to defeat the Spanish Armada in 1588, when Philip II attempted to invade England. Drake continued to harass the Spanish in the New World in the following years but with less success, and in 1596, he died of dysentery and was buried at sea off the coast of Panama.
3. Saladin, Muslim leader

Salah al-Din Yusuf ibn Ayyub aka Saladin was the Muslim leader during the Second and Third Crusades who recaptured Jerusalem in 1187. He was Kurdish by birth, born in Tikrit (in today's northern Iraq) in 1138, and by 1171, he had unified Egypt and Syria and established the Ayyubid dynasty.

Although they never met, Saladin reportedly earned the respect of Britain's Richard I, who had led the Third Crusade, and other Europeans including Dante, who considered him to be a "virtuous Pagan". Saladin died in Damascus in 1193, and his dynasty was replaced in 1250 by the Mamluk dynasty.
4. Joan of Arc, French patriot and saint

Jeanne d'Arc aka Joan of Arc was an illiterate peasant girl born in 1412 in Domremy, France. She grew up in a religious household, and from a young age, she claimed to hear voices of saints. At the age of thirteen, she began to see visions of saints telling her to expel the English from the French territory and install the French crown prince (dauphin), Charles, as the King of France.

At the age of sixteen, she set off to meet the dauphin and tell him of her mission. Charles supported her efforts, and she successfully led an assault against the English which allowed Charles to get to Reims where he was installed as King Charles VII.

She was captured following an assault on Compiegne and brought to trial in Rouen where she was burned at the stake in 1431 at the age of nineteen.

She was canonized in 1920, becoming the patron saint of France.
5. Mozart, Austrian musician

Wolfgang Amadeus Mozart was born into a musical family in Salzburg, Austria in 1756. His father served as his tutor, and as a child prodigy, Mozart performed for courts including London, Paris and Zurich with his older sister. As an adult, Mozart worked in the court in Vienna before going freelance, teaching students and writing music and operas.

The success of his opera, "Die Entführung aus dem Serail" ("The Abduction from the Seraglio") brought him fame, and he embarked on a lavish lifestyle that eventually took its toll.

Although he continued to produce successful works, he lived beyond his means and had to continuously work to pay off debts. He died in Vienna in 1791 at the age of 35 from an undetermined cause of death although it was listed as "severe military fever" at the time.

He was reportedly buried in a paupers' grave, but some sources merely list it as a common grave that was the usual method of burial in Vienna at the time.
6. Macbeth, King of Scotland

Mac Bethad mac Findlaich aka Macbeth MacFinley lived circa 1005-1057, and yes, he was the Macbeth of Shakespeare fame. He became King of the Scots (aka King of Alba) in 1040 by killing his cousin King Duncan I in battle, and he retained the throne until 1057 when he too died in battle, killed by Duncan's son Malcolm.

Although he is probably most famous today because of Shakespeare's play, he wasn't quite as treacherous as portrayed in that work (after all, killing a monarch to take his throne was the norm for those days). Macbeth's reign was fairly peaceful, and he even enacted some progressive laws, such as allowing daughters the same inheritance rights as sons.
7. Ibn Battuta, Moroccan traveler and scholar

Muhammad Ibn Battuta was a prolific explorer who traveled over 75,000 miles (120,000 km) in his journeys around Africa and Asia. Of Berber descent, he was born into a scholarly family in Tangier in 1304. In 1325, he set off to make his pilgrimage to Mecca, but he ended up traveling throughout the Muslim world, not returning to Morocco for 24 years.

After leaving Mecca, he spent time in Iraq, Turkey and Persia, before traveling down the coast of Africa to Kilwa, just south of Zanzibar. He then headed east through Central and Southern Asia, visiting India, Indonesia and China as well as the other lands along the way.

After his return home, he made excursions into Spain and into the Malian Empire before settling down to write an account of his journeys called "Travels" ("Rihla").

He died in Morocco circa 1369.
8. Margaret Mead, American anthropologist

Margaret Mead was born in Philadelphia, US, in 1901 into an educated and liberal family, with her father being an economist and her mother being a sociologist and a feminist activist. She studied at DePauw University and Barnard College and received her PhD from Columbia University in 1929 with her dissertation "An Inquiry into the Question of Cultural Stability in Polynesia".

She had first visited Samoa in 1925, and the South Pacific would become her area of expertise. She published the best-seller "Coming of Age in Samoa" in 1928, which would become her most famous and most criticized work. Fellow anthropologist Derek Freeman stated that he had talked to the original participants in her study and found that they deliberately misled her, making up outrageous stories to amuse her.

However her work on primitive societies and sexuality was novel for its time, and she was posthumously awarded the Presidential Medal of Freedom in 1979 for "bringing insight to cultural anthropology". She died in New York City in 1978.
9. Roger Bacon, English friar and scholar

Roger Bacon's claim to fame? He is considered to be the first modern scientist and usually gets credit for establishing the scientific method. He was born circa 1214 possibly in Ilchester, Somerset England (Bisley and Gloucester have also been suggested as the place of his birth) and studied at Oxford and the University of Paris.

He was a bit of a Renaissance man (albeit well before the Renaissance) having studied philosophy, mathematics, music and astronomy and was particularly interested in the recently rediscovered works of Aristotle.

Although he started out as a teacher of philosophy, Bacon changed his focus to science around 1247, devoting his time to experiments involving optics and alchemy, and he became a Franciscan friar about a decade later, compiling most of his works under the patronage of Pope Clement IV.

He died circa 1292 in Oxfordshire.
10. Rembrandt, Dutch artist

One of the Dutch Masters, Rembrandt van Rijn was born in Leiden, Netherlands in 1606. After training with artists in Leiden and Amsterdam, he embarked on his career as a painter and etcher in 1625 and had a successful career in producing works on commission and also as a painting instructor.

In 1642, after he painted one of his most famous works, "Militia Company of District II under the Command of Captain Frans Banninck Cocq ", better known as "The Night Watch", the volume of his work decreased, leading to the theory that "The Night Watch" wasn't well-received, although this is largely considered a myth. Rembrandt had personal and financial troubles in his later years, and when he died in Amsterdam in 1669, he was buried in a paupers' grave, with his remains being destroyed twenty years after his death.
Source: Author PDAZ 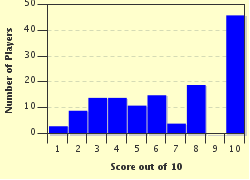 Related Quizzes
This quiz is part of series A Potpourri of People:

People...who love people... are the luckiest people.... And people who like People quizzes are in luck. Enjoy!


1. Why Did It Have to Be Me? Average
2. I Am Not Insane Average
3. Mixed People Bio-Limericks Very Easy
4. Quotations: Gods, Devils and Prayer Easier
5. The Living Years Average
6. Old Fires/New Frontiers Easier
7. When I Was Old Average
8. I See Blind People Average
9. Zoned Out Brilliant Easier
10. Gone Too Soon Average
11. Ships That Passed In The Night Tough
12. Fatal Females: Mary Ann Cotton Average