What do you know about Dr. Walter Freeman, "The Henry Ford of Lobotomy?" The information is taken from the PBS program "The Lobotomist."

Actually, the lobotomy was the brain child of Friederich Golz, who experimented on his dogs to see what would happen. Two years later, in 1892, Gottlieb Burkhardt used the procedure on six schizophrenic patients. The procedure seemed to have a calming effect on the four patients who survived the surgery.

In the 1930s, Dr. Freeman became concerned about the growing number of psychiatric patients, and the deplorable conditions in many institutions that housed them. Like other doctors, he believed that physical defects in the brain caused mental illness, and the procedure could be used to treat "psychiatric disorders."
2. Where in the brain did Dr. Freeman believe the cause of mental illness was located?

Dr. Freeman believed that if he could sever the strands of nerves that connected the frontal lobe to the thalamus he would be able to help patients who displayed signs of mental illness. Although he spent endless hours performing brain dissections of "mentally ill" patients, he never found any difference between their brains and the brains of "mentally healthy" patients.
3. In 1949 the Nobel Prize in Medicine was awarded for achievement in lobotomy.

The award was given to Dr. Egas Moniz, the leader of a team of Portuguese doctors who had refined the concept of lobotomy. Dr. Freeman did intitially find inspiration from Dr. Moniz's writings, which encouraged him to continue with his procedure and "perfect" it.
4. What was Dr. Freeman's speciality?

Dr. Walter Freeman was born in Philadelpha, Pennsylvania in 1895. His father was a successful doctor, and his grandfather, William Keen, was President of the American Medical Association. He graduated from Yale and the University of Pennsylvania Medical School, specializing in neurology and psychosurgery. Dr. Freeman was a neurologist without surgical training.

He hired Dr. James Watts, a neurosurgeon, to perform the surgery. In 1936 they became the first American doctors to perform a prefrontal lobotomy by craniotomy in an operating room.
5. What type of tool was originally used to perform lobotomies?

One of Dr. Freeman's sons claims that the first ice picks used in his father's lobotomies were from their kitchen! Dr. Freeman would hammer an ice pick into each frontal lobe through the back of the eye socket. These lobotomies were performed very quickly and without a surgeon, many times while the patient was awake, so that his/her reactions to the procedure could be seen. Dr. Freeman and Dr. Watts no longer shared an office after Dr. Watts walked in on Dr. Freeman while he was performing an ice pick lobotomy.
6. Dr. Freeman's "Patient 66" came from which prominent family?

Unfortunately, Rosemary Kennedy was permanently incapacitated by one of Dr. Freeman's lobotomies when she was 23. Her father arranged the procedure because he was concerned that her erratic behavior might hurt her brothers' political careers. There is some disagreement as to the nature of Rosemary's problem initially.

There is also a claim that Dr. Freeman performed a lobotomy on Francis Farmer, a movie star who was "the next Garbo". However, some sources say that the claim has been disproved.
7. What seemed to be a side effect of lobotomies?


Answer: All of these are correct.

Dr. Freeman would call the lobotomy successful if the patient was no longer agitated. In addition to the above side effects, patients sometimes had to be retaught how to use the toilet and how to walk. Often patients would relapse after three or four months and require another procedure.
8. How many lobotomies could Dr. Freeman perform in one day?

During the West Virginia Lobotomy Project the doctor performed lobotomies on 248 patients in eight days. His daughter jokingly called him the "Henry Ford of Lobotomy." Dr. Freeman also trained other doctors to perform the procedure. This "training" be accomplished in "a few hours in the afternoon." One of the doctors he trained supposedly performed 75 in one day.
9. How many lobotomies were eventually performed by Dr. Freeman?

Eventually, long term studies proved that lobotomies were not that beneficial, and lobotomy became an operation of last resort. Dr. Freeman lost his license to practice medicine when a patient that he was lobotomizing died. He continued to visit his former patients until his death in 1972.
10. The advent of which antipsychotic drug in the mid-1950's made lobotomies obsolete as a common practice?

Thorazine was at first accepted as a "chemical lobotomy." Although the results were not always conclusive, at least a person could simply stop taking the drug. A lobotomy, on the other hand, is irreversible.
Source: Author ponycargirl 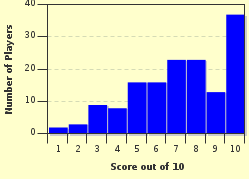