What was forgotten in the terrible tragedy at Virginia Tech is that one of the professors who tried to stop it, Nikki Giovanni, is one of our greatest living poets. A tribute.

Share on Facebook
Share on Twitter
Share by E-Mail
Author
stuthehistoryguy
Time
5 mins
Type
Multiple Choice
Quiz #
259,434
Updated
Dec 03 21
# Qns
10
Difficulty
Average
Avg Score
7 / 10
Plays
1577
Awards
Editor's Choice
This quiz has 2 formats: you can play it as a or as shown below.
Scroll down to the bottom for the answer key.

Quiz Answer Key and Fun Facts
1. A good quiz on a public figure should probably start at the beginning: When and where was Nikki Giovanni born?

Though born in Tennessee, Nikki Giovanni grew up in suburban Cincinnati, Ohio. She has one child, Thomas Watson Giovanni, born in that city in 1969.
2. Much of Giovanni's poetry has autobiographical themes. For example, Giovanni's signature poem, "Nikki-Rosa" (written in 1968), concludes: "and I really hope no white person ever has cause to write about me because they never understand Black love is Black wealth and they'll probably talk about my hard childhood and never understand that all the while I was quite _____" What word goes in the blank?

All through this great poem, Giovanni illustrates this state of mind. For example, from the first stanza:

The idea that adversity is a state of mind rather than a set of circumstances is a major theme in Giovanni's work, This is not to say she is any kind of Pollyanna, but she comes back, time and again, to the idea that others really cannot understand how she thinks and feels from external observations.
3. Like many artists of her generation, Giovanni explored issues of African-American identity (including the legacy of slavery) and pan-Africanism. Her 1972 poem "Africa II", for example, sees her reflect on her tour of Cape Coast Castle in Ghana, an important holding fort in the trans-Atlantic slave trade. What image does Giovanni use to frame this poem about claiming her African heritage?

Never one to shy away from a sensuous description, Giovanni begins "Africa II" with: "Africa is a young man bathing/in the back of a prison fortress". The poem concludes with "as I wanted to/sink my teeth into his thigh/and tell him he would never be/clean until he can/possess me". My undergraduate professor of African history, Learthen Dorsey, used this poem to introduce his course, including the themes of the slave trade and the nascent character of African governments in the wake of colonialism.
4. In the early 1970s, Professor Giovanni was named Woman of the Year by multiple publications. Which of these was not one of them?

She received this honor from "Ebony" in 1970, from "Mademoiselle" in 1971, and from "Ladies Home Journal" in 1972.
5. Though perhaps best known for her work of the late 1960s/early 1970s, Giovanni's 1997 compilation, "Love Poems", showed that the writer could still be provocative. To what hip-hop figure was this volume dedicated?

In addition to dedicating the book to the deceased star, Giovanni also composed the poem "All Eyez on U" for Shakur and went so far as to get a tattoo reading "Thug Life" as an homage to the MC's own iconic tattoo. As she writes in her dedication, she would "rather be with the thugs than the people who are complaining about them."
6. In addition to being influenced by hip-hop culture, Giovanni has proven to be something of an influence as well. What hip-hop group recorded Giovanni's poem "Ego Trip" on their 2000 debut album, "Nia"?

A product of her 1970 book "Re: Creation", the poem "Ego Tripping" (shortened in the Blackalicious version) mixes verse both original and surreal ("I sowed diamonds in my back yard/My bowels deliver uranium) and familiar ("I mean...I...can fly/like a bird in the sky...", the couplet that ends the poem).
7. Professor Giovanni holds a Bachelors Degree in History from Fisk University and did early work in the graduate programs at the University of Pennsylvania and Columbia University. In recognition of her professional work, several institutions have also chosen to award her honorary degrees. Which of these universities has not granted Professor Giovanni an honorary Doctorate?

As of her April 2006 curriculum vitae, Professor Giovanni holds twenty-one honorary doctorates, including one conferred by her alma mater, Fisk University, in 1988.

Bob Jones University is well-known for being one of the last colleges in South Carolina to admit African-Americans, finally admitting unmarried blacks in 1975, though it had admitted married African-Americans some years earlier. The college forbade interracial dating until 2000, only changing this policy in advance of a visit by Presidential candidate George W. Bush. At the end of 2006, students were still prohibited from going to the movies or having DVD players in the Residence Halls. Listening to music classified as country, jazz, New Age, rock, rap, or contemporary Christian is also proscribed. Though I am unaware of any specific comments made by Professor Giovanni about the administration of Bob Jones University or vice-versa, I can speculate with some confidence that this University will not be conferring an honorary doctorate upon professor Giovanni, nor will she be accepting one from them, at any time in the near future.
8. In 2005, Giovanni won the Oppenheim Toy Portfolio Best Book and the "Child Magazine's" Best Children's Book of the Year awards for a picture book illustrated by Bryan Collier. What American heroine did this work depict?

Giovanni's book "Rosa" thoughtfully supplies historical context for Parks' 1955 arrest in Montgomery, Alabama, alluding to events like the murder of Emmett Till and the Brown vs. Board of Education decision. To the chagrin of some reviewers, Giovanni did not fear to challenge her young readers.

She juxtaposes the striking historical events of the time with the everyday occurrences (work, preparing dinner, and the like) that constitute people's lives, including the heroic lives.
9. In addition to her literary work, Giovanni has lent her efforts to people battling a dread disease, of which she herself is a survivor. What disease is this?

Giovanni lost both her mother and sister to the disease, and had one of her lungs removed when she was stricken. She composed the introduction to the 2005 volume "Breaking the Silence: Inspirational Stories of Black Cancer Survivors" by Karin Stanford.
10. Nikki Giovanni captured the national spotlight in 2007 when, after mentally disturbed English major Cho Seung-Hui killed 32 Virginia Tech faculty and students in the morning hours of April 16, it was reported that Professor Giovanni (a Distinguished Professor of English at the school since 1987) had demanded the shooter's dismissal from one of her courses in 2005 for bizarre and threatening behavior, threatening to resign if he was left in the class. At the convocation the day following the horrible events, Professor Giovanni gave closing remarks in a rhythmic meter. What phrase did she use as a recurring motif in these lines?


Answer: "We are Virginia Tech"

Giovanni's full text is as follows:

"We are Virginia Tech.

We are sad today and we will be sad for quite awhile. We are not moving on, we are embracing our mourning.

We do not understand this tragedy. We know we did not deserve it but neither does a child in Africa dying of AIDS, but neither do the invisible children walking the night to avoid being captured by a rogue army. Neither does the baby elephant watching his community be devastated for ivory; neither does the Appalachian infant killed in the middle of the night in his crib in the home his father built with his own hands being run over by a boulder because the land was destabilized. No one deserves a tragedy.

The Hokie Nation embraces our own with open heart and hands to those who offer their hearts and minds. We are strong and brave and innocent and unafraid. We are better than we think, not quite what we want to be. We are alive to the imagination and the possibility we will continue to invent the future through our blood and tears, through all this sadness.

We are the Hokies.

We are Virginia Tech."

As always, I'd love to hear any comments you might have, especially those that will make this a better quiz. Thanks for playing.
Source: Author stuthehistoryguy

This quiz was reviewed by FunTrivia editor DakotaNorth before going online.
Any errors found in FunTrivia content are routinely corrected through our feedback system.
Most Recent Scores
Dec 28 2022 : Guest 112: 4/10
Dec 14 2022 : turaguy: 4/10 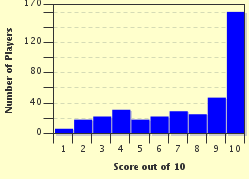