Neil Gaiman is one of the finest authors living today, in comics, children's books and literature. How well do you know his work?

Quiz Answer Key and Fun Facts
1. Which pop band did Neil write a biography of early in his career?

The biography of this popular 80s group was published in 1985 and approved by the band members themselves. It is now out of print and is something of a collectors' item for Gaiman's fans.
2. On which of these graphic novels written by Gaiman did artist Dave McKean not take part?


Answer: The Books of Magic

Mr. McKean did not take part in 'The Books of Magic', however four of the leading artists in comics did: Scott Hampton, John Bolton, Paul Johnson and Charles Vess.
3. Which British comedian helped in producing the BBC mini-series 'Neverwhere', based on Gaiman's novel?

Lenny Henry is known for his sitcom 'Chef' as well as being married to Dawn French from the Saunders & French comedic team. The music for the mini-series was written by ambient musician/producer Brian Eno.
4. Which singer did Neil collaborate with on 'Last Temptation'?

The story, created by Neil and Alice, was the basis for Cooper's album of the same name. The black & white artwork was supplied by Michael Zulli who also collaborated on 'Sandman 10: The Wake'
5. In Neil Gaiman's acclaimed 'Sandman' series, who is the eldest of the Endless?

Destiny's task is to keep record of the entire history of the universe, and therefore existed some time before all the others - though it was many years before any of them took on human forms.
6. In Neil's 'Sandman' books, Delirium, the youngest of the Endless, once went by a different name. What was she called?

We do not know why she was transformed, though. Delight was not the only one of the Endless to change - both Dream and Despair are second in their positions. The first Despair was gone long before the chronological beginning of the series, while the original Dream, Morpheus, dies in book 9, 'The Kindly Ones', and replaced.
7. Which female singer is a good friend of Neil's?

Tori wrote the introduction to 'Death: The High Cost Of Living', and she also made a reference to Neil in her song 'Tear In Your Hand' from the album 'Little Earthquakes'.
8. Lucifer Morningstar, a minor character from Neil's popular 'Sandman' series, had in recent years received his own series published by Vertigo Comics. Who writes it?

All the others are all writers for Vertigo as well: Ennis writes 'Preacher', Delano used to write 'Hellblazer', and Azzarello writes '100 Bullets'.
9. Which minor character from Gaiman's 'Sandman' comics was given a one-shot story for themselves written by Bill Willingham?

Lucien did get his own story (titled 'The American Dream') on the '9-11' collection, but 'Merv Pumpkinhead: Agent Of Dream' is the one that was written by Willingham. It was released in 2001 and is a rather idiotic James Bond parody.
10. Which trade paperback in Neil's 'Sandman' series was not a collection of previously released comics, but an illustrated folk tale?

A beautiful fairy tale with amazing illustrations by Yoshitaka Amano. All of the others were originally published as monthly comics between 1988 and 1996.
11. Which Japanese animated feature did Neil write the English script for?

A beautiful film by Hayao Miyazaki. The English version had a star-filled cast including the voices of Claire Danes, Billy Crudup, Gillian Anderson and Minnie Driver.
12. In Neil's bestselling novel 'American Gods', what does Odin call himself when he introduces himself to Shadow?

He meets Shadow on a plane on the day Shadow is released from prison, and gives him a very unusual job offer.
13. Which single story from the 'Sandman' series won Neil the World Fantasy Award?

'A Midsummer Night's Dream' (Sandman #19) received the 1991 World Fantasy Award for best short story; many authors were outraged, and the rules of the award were soon changed to make sure no 'comic book' could ever win again. The other three are all great 'Sandman' stories too, 'A Man of Good Fortune' being my favorite in the series.
14. Which successful comics writer and publisher did Neil sue for copyright violation?

The jury decided in Neil's favor, agreeing that McFarlane used Neil's characters without his permission, and he was awarded $45,000.
15. What is the name of Adam's dog in 'Good Omens', which Neil co-wrote with comedy author Terry Pratchett? 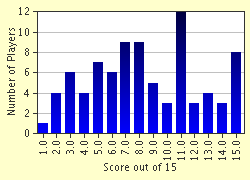 
Other Destinations
Explore Other Quizzes by itamarkatz