They Remember Me For WHAT? Trivia Quiz

Imagine that you were one of the greatest and most respected scientists of your time. Now imagine that you have just awakened in the 21st century to discover that you are best known for...well...why don't you take this quiz and find out?

Quiz Answer Key and Fun Facts
1. I was an ancient Greek mathematician and mystic. I had a colorful, if somewhat obscure, early life in the eastern Mediterranean before I founded a religious and philosophical society in Croton based around mathematics. I swore all of my followers to strict secrecy, so it SHOCKS me that anything leaked out. Now everyone knows me for a little theorem about right triangles. I didn't even discover it; the Babylonians beat me to it by 1000 years. Who am I?

The Pythagorean Theorem states that, for a right triangle, the squares of the two sides equal the square of the hypotenuse. I may have been the first person to prove the theorem, but that fact has been lost to history. I'm certainly not telling!
2. I was a Medieval mathematician. I was born in Pisa, but I grew up in North Africa, where I was exposed to the vast scientific and mathematical knowledge of the East. I was famous in my time for writing a book called the "Liber Abbaci," which introduced the decimal system to Europe and described how to do basic arithmetic with it. This was also the first time anyone in Europe had ever used a symbol for the number zero! However, you probably know me best for the series of numbers that begins 0, 1, 1, 2, 3, 5... I didn't invent it; I just borrowed it for a problem in my "Liber Abbaci." Who am I?

The Fibonacci series is produced by the equation Fn = Fn-1 + Fn-2. In words, each term is produced by adding the previous two terms together. I defined the first two terms to be zero and one. Even though I first used the problem for a simple exercise, my series has far-reaching applications in mathematics, science, finance, and the natural world.
3. I was a 19th century German chemist. I was the first to synthesize isobutyric acid, guanide, creatine, creatinine, and tyrosine. I also discovered an important rule about alcohols, which is named after me. But that's not what my name makes most people think of! It's the clever flask I invented! And I bet they can't even remember my full name, much less spell it right. Who am I?

You've probably seen an Erlenmeyer flask, even if you haven't recognized it as such-- it's the triangular or conical flask that's often shown partially full of blue liquid, used to symbolize science. My Erlenmeyer flask is a clever flask indeed. I designed it for mixing substances.

The conical shape and narrow neck of the beaker prevent the contents from splashing. The wide, flat base also keeps the flask from falling over.
4. I was a 19th century German chemist. I pioneered the fields of emission spectroscopy and photochemistry, and I also co-discovered two elements, cesium and rubidium. Despite these accomplishments, I'm best remembered for my nifty little burner, which made much of my work possible. Who am I?

This is, of course, the Bunsen burner. When I took a professorship in Heidelberg, the city had just installed coal-gas street lights, and so my new laboratory building was also supplied with gas. Unlike street lights, which try to maximize light production and minimize heat, I needed a burner which would produce mainly heat, and allow me to adjust the amount of heat produced. I worked with my university's mechanic, Peter Desaga, to produce such a burner.

The design was so good that many of my colleagues adopted it, and Bunsen burners are still commonly used today.
5. I was a 19th century French chemist. My accomplishments are so many that they are hard to list: I developed vaccination, discovered the germ theory of disease, proposed the existence of viruses, invented stereochemistry... Today, you can see my name on almost any milk carton. Who am I?

Pasteurization is a process in which food is heated to a temperature sufficient to kill most disease causing microorganisms. I first invented pasteurization to prevent wine and beer from souring, but you are probably most familiar with pasteurized milk. Unlike sterilization, which kills all the microorganisms present in food, pasteurization only kills enough to prevent food from spoiling when refrigerated, usually on the order of 99.99%.
6. I was a 19th century German mathematician and astronomer. I developed a lot of math: there's my configuration, formed by two mutually inscribed tetrahedra, my transformation in number theory, my transformations in projective geometry, my function, and my inversion formula. Pretty nifty, eh? You're probably most familiar with the strip named after me, a two-dimensional surface with only one side. Who am I?

You can make a Möbius strip by taking a strip of paper, giving one end a half-twist, and then taping the ends together. A Möbius strip has only one side, which you can prove to yourself by drawing a line along its one surface. A later German mathematician, Felix Klein, is the namesake of the three-dimensional version of a Möbius strip-- it's called a Klein Bottle.
7. I was a 20th century physicist at Princeton and MIT. I designed apparatus for experiments in radiation and particle physics. My eponymous invention, a static electricity generator, has been superseded by other, higher energy devices. But, it is still used for demonstrations in classrooms and science museums worldwide. Who am I?

The Van de Graaff generators you may have seen look like a large silver ball on top of a thick tube and a base. The tube contains a rapidly moving belt of insulating material. Charge is stripped off the belt by a comb and transferred to the silver ball. Static charge builds up on the ball until it discharges as a large, lightning-like spark. If you stand on an insulating material (like a chair) and put your hand on the ball, charge will accumulate on you, too.

This static electricity can cause your hair to stand on end, and you can also shock unsuspecting people.

The largest Van de Graaff generator I ever built is capable of generating 5 million volts of static electricity. It was donated to the Boston Museum of Science, where it is used for daily demonstrations. Shocking!
8. I was a 20th century German physicist. I did extensive work on radioactivity with Ernest Rutherford, and devised a formula, named after me, for the velocities of particles. I contributed to the discovery of the atomic nucleus, and participated in Germany's effort to build an atom bomb. The radiation counter I developed and steadily improved upon is still used today. Who am I?

My Geiger counter contains a tube of inert gas. When alpha particles, beta particles, or gamma rays pass through the gas, they ionize it, which causes the tube to conduct a pulse of electricity. Many Geiger counters alert you to the radiation with a click.
9. I was a 20th century Swiss psychiatrist. I acted as the director of several asylums, and I pursued research in the psychoanalysis and psychopathology of religion. I also had a deep interest in art, and my love of inkblots led to my most famous test. My schoolmates even called me "Klex," which meant "inkblot." Who am I?

The Rorschach inkblot test is used to for clinically diagnosing psychopathy. The patient is presented with a series of specially designed inkblots, and asked to describe what they see. The answers give insight into the structure of the patient's mind.
10. Born in Vienna, Austria, I was a twentieth century physicist who helped develop modern quantum theory. My wave equation was one of my greatest discoveries, and I received a Nobel Prize for it. But, you've probably heard of me because of my cat. Is it alive, or is it dead? Let's open the box. Who am I?

I designed Schrödinger's Cat as a thought experiment about the nature of quantum mechanics. Imagine that you have trapped a cat in a steel chamber with a small amount of a radioactive substance. If, over the course of an hour, one of the atoms decays, it will set off a Geiger counter which activates a device that will kill the cat. If no atoms decay, then the cat lives. According to quantum mechanics, all possible outcomes must exist in a superposition of states at the microscopic level. Thus, since the cat's fate is linked to events at the microscopic level, it, too, must exist in a superposition of states-- it must be both alive and dead.

It doesn't make sense to us for something to be both alive and dead-- hence the crux of the thought experiment. Strangely enough, nobody seems to know whether I ever owned any cats.
Source: Author pu2-ke-qi-ri 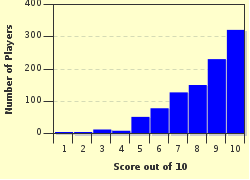 
Other Destinations
Explore Other Quizzes by pu2-ke-qi-ri