Though are many quizzes about artists, the women who inspired their work are often neglected. Here's a quiz about ten of these fascinating, and often scandalous, ladies.

Quiz Answer Key and Fun Facts
1. Leonardo Da Vinci's portrait of "Mona Lisa" - probably the most famous painting in the world - is known in Italy by a different name, which refers to the sitter's family name.

Monna (a shortened form of Madonna, "my lady") Lisa Gherardini, wife of Florentine silk merchant Francesco del Giocondo, has been confirmed as the subject of the portrait, probably commissioned by her husband to celebrate the birth of their second son. "Gioconda" (feminine form of the adjective "giocondo") means "happy", "joyful". Leonardo started work on the painting when he was still living in Florence, and took it with him when he moved to France in 1516.

"Gioiosa" would be a synonym of "gioconda", while "Gironda" is the Italian form of Gironde, the estuary of the Dordogne and Garonne in southwestern France, and "Giovanna" is the Italian form of the English name Joan.
2. The beautiful, red-haired Elizabeth Siddal posed for many artists of the Pre-Raphaelite Brotherhood before her untimely death at the age of 33. Who was her husband, who was also one of the movement's founders?

The son of an Italian émigré, Dante Gabriel Rossetti (1828-1882) founded the Pre-Raphaelite Brotherhood in 1848, together with John Everett Millais and William Holman Hunt. Two years later, he met Elizabeth Siddal, who was one of the movement's favourite models, and married her in 1860. Though deeply in love with Elizabeth, Rossetti cheated on her with other women - only to fall into a deep depression when, in 1862, she died of an overdose of laudanum shortly after having given birth to a stillborn baby. Elizabeth was the model for Everett Millais' "Ophelia" and Rossetti's "Beata Beatrix", both at London's Tate Britain.

Edward Burne-Jones was not part of the original group, though he was associated with the movement's later phase.
3. Russian-born Gala Diakonova was still married to her first husband when she met this icon of Surrealism (famous for painting melting clocks) and became his muse and favourite model.

Born in 1894 as Elena Ivanovna Diakonova, Gala was a striking, charismatic woman who became an inspiration for many writers and artists of the Surrealist movement, including her first husband, the poet Paul Éluard, and German artist Max Ernst. After the breakup of her first marriage, she married Salvador Dalí in 1934, and appeared in many of his works.

The remaining three choices are also artists associated with Surrealism. Like Dali, Miró was from Spain, while Magritte was from Belgium, and Breton from France.
4. Simonetta Vespucci was acclaimed as the most beautiful woman in Renaissance Florence. One of her most fervent admirers was this celebrated painter, who was said to have depicted her as Venus rising from the sea.

Hailing from the Republic of Genoa, Simonetta Cattaneo married the Florentine nobleman Marco Vespucci, a cousin of explorer Amerigo. She was renowned for her beauty, and artists, intellectuals and noblemen (including the city's ruler, Lorenzo de' Medici, and his younger brother Giuliano) were besotted with her. When she died in 1476, at the age of 22, the whole city mourned her. Sandro Botticelli's "The Birth of Venus" was completed in 1485, nine years after her death. Though some art historians have dismissed the notion, it is widely believed that the goddess of love and beauty was a portrait of Simonetta. When Botticelli died in 1510, he was buried in the church of Ognissanti, the Vespucci famili's parish church, near Simonetta's tomb.

The other three choices are all famous Renaissance painters. Signorelli and Bellini were contemporaries of Botticelli, though neither of them was from Florence. Masaccio, on the other hand, belonged to the Renaissance's very first generation; he died in 1428, almost 20 years before Botticelli's birth.
5. Louise Weber, known by the stage name of La Goulue (The Glutton), was a French dancer who became one of the favourite subjects of Impressionist painter Henri de Toulouse-Lautrec. What dance was she famous for?

At the height of her career, can-can dancer La Goulue was the star of the legendary Moulin Rouge in the bohemian Paris neighbourhood of Montmartre. Her nickname came from her habit of picking up a customer's glass and downing its contents during her dance routine.

She also worked as a model, often posing for nude photographs. Unfortunately, her decision to leave the Moulin Rouge and strike out on her own turned out to be a failure, and she ended her days in poverty, selling peanuts, cigarettes and matches in the street before obesity and alcoholism caught up with her. Toulouse-Lautrec's best-known portrait of her, "La Goulue Arrives at the Moulin Rouge", was painted in 1892.
6. Filippo Lippi's lovely "Madonna with Child and Two Angels", which can be admired at the Florence's Galleria degli Uffizi, is said to portray the likeness of Lucrezia Buti, the beautiful young woman with whom the artist had a passionate affair. What was unusual about this love story?


Answer: he was a monk and she was a nun

Born in Florence at the beginning of the 15th century, Filippo Lippi became a Carmelite monk at the age of 16, though he was more in interested in art and women than prayer (at least according to Giorgio Vasari's gossipy biography). When he met Lucrezia, he was already in his early fifties (therefore considerably older than her). Though the two never married, the relationship lasted until the artist's death, and produced two children, a daughter and a son, Filippino, also an outstanding painter in his own right. Though no one knows for sure if the Madonna in the Uffizi's lovely painting is really a portrait of Lucrezia Buti, the rumour was enough to ensure the work's enduring popularity.
7. One of the most iconic statues in early 19th-century art is Antonio Canova's "Venus Victrix" (Venus Victorious), which depicts the beautiful, half-naked Pauline Borghese reclining on a couch. Who was Pauline's famous older brother?

Born Maria Paola Buonaparte in 1780, Pauline was very close to her imperial brother, and was the only member of the family to visit him in his exile on the island of Elba. She was married twice, first to General Charles Leclerc (who died of yellow fever during the Haiti uprising), and the second time to Camillo Borghese, a member of the Roman aristocracy.

She had a reputation for promiscuity, and quite enjoyed the notoriety that came with her posing naked for Canova. The statue can be viewed in Rome's Galleria Borghese, where it was brought in 1838.
8. A famous society beauty in turn-of-the-19th-century Paris, Virginie Gautreau was the wife of a French banker, who had her portrait painted by renowned American artist John Singer Sargent. What is the portrait known as?

Sargent's "Madame X" portrayed Virginie Gautreau in a low-cut, black satin ball gown that emphasized her hourglass figure and pale skin, with one of the straps slipping down her shoulder. The painting, exhibited at the Paris Salon in 1884, caused a scandal, which forced Gautreau to retire temporarily from society.

The artist's reputation in Paris was also damaged, and soon afterwards he moved to London permanently. The painting can be admired at the Metropolitan Museum of Art in New York City.
9. Pepita Tudó, the mistress of Spanish Prime Minister Manuel de Godoy, was likely the model for "La Maja Desnuda" (The Naked Maja), one of the best-known works by this major Spanish artist of the late 18th and early 19th centuries.

Pepita Tudó was a young woman of humble origins, who grew up in the household of Manuel de Godoy, and later became his mistress. Godoy probably commissioned "La Maya Desnuda" for his private cabinet of nude paintings, and Goya later painted "La Maja Vestida", a fully clothed portrait of the same woman in the same pose. The paintings hang side by side in Madrid's Museo del Prado. Pepita was portrayed by famous Spanish actress Penélope Cruz in Bigas Luna's 1999 film "Volavérunt".

The remaining three choices are also major Spanish painters, though they were active well before Goya's time (late 16th century for El Greco, 17th century for Murillo and Velázquez).
10. A moderately successful artist in her own right, Victorine Meurent was also the favourite model of this influential French artist, in whose best-known paintings, "Olympia" and "The Luncheon on the Grass", she appeared in the nude.

Victorine-Louise Meurent was born in Paris into a family of artisans, and started modeling at the age of 16. Her paintings were regularly exhibited at the Salon, the official exhibition of Paris' Academy of Fine Arts. However, her name is forever associated with Manet's ground-breaking "The Luncheon on the Grass" and "Olympia" (both painted in 1863). In the latter painting, which caused a scandal when it was exhibited at the Salon in 1865, she is portrayed as a prostitute reclining naked on her bed, with a black maid bringing her a bouquet of flowers.

The other three choices are among the most influential French Impressionist painters.
Source: Author LadyNym 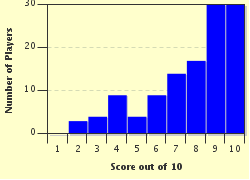 Related Quizzes
This quiz is part of series The Fascinating Lives of Famous People:

I love writing quizzes about famous people in history, especially those with a common theme. Enjoy!


1. Want to Model? Easier
2. Lady Lazarus Very Easy
3. Mewsic to My Ears Easier
4. A Crown of Swords Average
5. We're Not Meant for Happiness, You and I Easier