A Quick Look at Occupations in the Old Testament Quiz

This quiz takes a look at ten characters from the Old Testament of the Protestant Bible. Your challenge is to match the occupations with the characters. (The NKJV and the NIV were used for this quiz.)

Share on Facebook
Share on Twitter
Share by E-Mail
Author
Cowrofl
Time
4 mins
Type
Match Quiz
Quiz #
383,487
Updated
Dec 03 21
# Qns
10
Difficulty
Average
Avg Score
7 / 10
Plays
238
Mobile instructions: Press on an answer on the right. Then, press on the gray box it matches on the left.
(a) Drag-and-drop from the right to the left, or (b) click on a right side answer box and then on a left side box to move it.

Quiz Answer Key and Fun Facts
1. Find the match for the person who was a nurse. (Genesis 35:8)

Deborah was a nurse for Rebekah, according to Scripture. However, not much is known about her as she is mentioned in passing reference. The lone verse that makes reference to Deborah is Genesis 35:8. The verse in the NKJV states: "Now Deborah, Rebekah's nurse, died, and she was buried below Bethel under the terebinth tree. So the name of it was called Allon Bachuth."

According to notes in the NKJV Study Bible, Allon Bachuth means Terebinth of Weeping.

There is another woman in Scripture called Deborah. She was a prophetess and a a dynamic judge who ruled over Israel, as per Judges 4.
2. Find the match for the person who was a cupbearer.

Nehemiah was the cupbearer to King Artaxerxes, according to Nehemiah 1:11. Scripture records he was successful in getting permission from the king to lead a contingent of Israelites out of Persia and back to Jerusalem to re-build the walls around the city.

He was the son of Hachaliah. The job of the cupbearer was to serve drinks at the royal table. In other words, Nehemiah was a butler in the royal palace of King Artaxerxes.
3. Find the match for the person who was a prostitute. (Joshua 2:1)

Rahab, of course, is the correct answer. Her story appears in the second and sixth chapters of Joshua. She gained fame because she hid two Israeli spies when they were sent to check out the land around Jericho.

I find it interesting that some refer to prostitution as 'the world's oldest profession' as they seem to think it is the first occupation mentioned in the Bible. However, the first reference to prostitution doesn't appear until Genesis 34:31 where the sons of Jacob expressed their anger at their sister Dinah being treated like a prostitute by Shechem. However, there are a number of other occupations listed before this use of the word 'prostitute'.

The first direct reference to a prostitute is the 38th chapter of Genesis where it tells of Judah mistaking his daughter-in-law Tamar for a prostitute. With this background, there's a strong case to be made that the world's oldest profession is farmer (Cain, Genesis 4:2) or music teacher (Jubal, Genesis 4:21).
4. Find the match for the person who was a judge. (Judges 12:8-10)

Ibzan has only three verses devoted to him in the Old Testament but they're packed with fascinating information. Judges 12:8-10 states he had thirty sons and thirty daughters and judged Israel for seven years. The verses also state he gave away his thirty daughters in marriage and brought in thirty daughters from elsewhere for his sons. However, there is no mention of the number of wives he had. Ibzan replaced Jephthah as judge and was followed by Elon. He was buried in Bethlehem.
5. Find the match for the person who was a queen. (Esther 1:11)

Vashti refused a request of King Ahasuerus, also known as Xerxes in the NIV Bible, to appear before a banquet and show her beauty. Ahasuerus opted to depose of her as queen after consulting with his wise men. The feeling was if she wasn't deposed, other women in the kingdom would be disobedient to their husbands.

Vashti was a person who stood on her principles regardless of the consequences. She was the first women's libber. In my opinion, she should be looked upon as a heroine in Scripture. After all, her disobedience played a role in saving the Israelites from mass genocide because after she was deposed, Esther ascended to the throne. If Vashti hadn't taken a defiant stand, it was unlikely Esther would have become queen. Unfortunately, after Vashti is deposed, she is never again mentioned in Scripture.
6. Find the match for the person who was a high priest. (2 Samuel 20:25)

Abiathar was a high priest but he ran afoul of Solomon and was deposed. According to Scripture, Abiathar took part in a failed attempt to make Adonijah king of Israel in place of David. In 1 Kings 2:26-27, Solomon is quoted as telling Abiathar what he had done was worthy of death. "But I will not put you to death at this time, because you carried the ark of the LORD God before my father David, and because you were afflicted every time my father was afflicted," Solomon told Abiathar, as per the NKJV. Scripture states Abiathar was banished to Anathoth, his hometown.

The removal of Abiathar is reported in the same chapter in which Solomon ordered the execution of Adonijah and Joab, another supporter of Adonijah as king.

According to the website Christiananswers.net, this is the only historical instance of the removal of a high priest.
7. Find the match for the person who was a servant. (Genesis 15:2)

Genesis 24:12-14 tells of the servant praying in this matter. The passage, in the NKJV Bible, states: "Then he said, 'O LORD God of my master Abraham, please give me success this day, and show kindness to my master Abraham. Behold, here I stand by the well of water, and the daughters of the men of the city are coming out to draw water. Now let it be that the young woman to whom I say, 'Please let down your pitcher that I may drink,' and she says, 'Drink, and I will also give your camels a drink' -- let her be the one You have appointed for Your servant Isaac. And by this I will know that You have shown kindness to my master."

Verse 15 goes on to state that before he had finished praying, Rebekah came out with her jar on her shoulder. The rest, as they say, is history.
8. Find the match for the person who was a shepherd in his younger years. (1 Samuel 16:19)

David, of course, is the correct answer. Although he was the second king of Israel, he had humble origins, serving as a shepherd boy before he slew Goliath (1 Samuel 16:11-13). Scripture records that David was an ace with a slingshot as he used it on numerous occasions to kill beasts that attacked the sheep he was attending to.

It was this same skill he used when he slew Goliath, using a slingshot to kill the behemoth of a man who had terrified Israeli soldiers.
9. Find the match for the person who was a tiller of the ground. (Genesis 4:2)

Yes, Cain is the correct answer. Being described as a tiller of the ground, he's the first person in the Bible to have the occupation of farmer. The same passage, Genesis 4:2, indicates Abel kept flocks. In other words, Abel was the first shepherd in the Bible.
10. Find the match for the person who forged tools out of bronze and iron. (Genesis 4:22)

Tubal-Cain is the correct answer. His father was Lamech and his mother was Zillah. He had a sister named Naamah. Incidentally, Tubal-Cain is the first hyphenated name in the Bible.
Source: Author Cowrofl

This quiz was reviewed by FunTrivia editor looney_tunes before going online.
Any errors found in FunTrivia content are routinely corrected through our feedback system.
Most Recent Scores
Jan 29 2023 : Guest 199: 6/10
Dec 12 2022 : Guest 99: 10/10 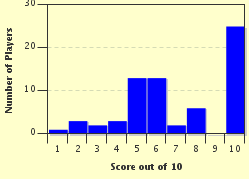