Shepherds in the Old and New Testaments Quiz

This quiz takes a look at shepherds in the Old and New Testaments. I hope you have as much fun playing this quiz as I had creating it. (The NKJV and the NIV were used for this quiz.)

Quiz Answer Key and Fun Facts
1. According to Genesis 4:2, who was the first shepherd?

Genesis 4:2 states Abel was the "keeper of sheep" while his older brother Cain was a "tiller of the ground." No further details are giving about their occupations. The two men were the sons of Adam and Eve. Chapter 4 of Genesis goes on to tell of Cain killing Abel in a severe fit of jealousy.
2. According to Genesis 29:9, what woman was serving as a shepherdess when she first met Jacob?

Rachel is the correct answer. According to Scripture, Jacob had travelled to Haran, the home of his mother Rebekah, when he met Rachel, who was taking care of her father's sheep. Scripture goes on to tell of Jacob rolling the stone from the mouth of a nearby well, enabling Rachel's sheep to drink. Scripture goes on to tell of Jacob working for fourteen years for Rachel's father Laban to earn the right to win her hand in marriage.

Jacob and Rachel were the parents of Joseph and Benjamin.
3. According to Exodus 2:16-17, what man married the shepherd girl Zipporah?

Zipporah was the wife of Moses. According to Exodus 2, Moses first met Zipporah in Midian after he had fled from Egypt where he had murdered an Egyptian man who was beating a Hebrew. Verses 16-17 tell of Moses meeting seven sisters at a well while they were tending the flocks of their father Reuel, also known as Jethro elsewhere in the Bible.

Scripture goes on to tell of Moses ending up at the home of Jethro and then taking Zipporah as his wife. Moses and Zipporah were the parents of two sons, Gershom and Eliezer, as per Exodus 18:3-4.

The Website Biblegateway.com states Zipporah means "a little bird" or "a sparrow."
4. David is credited with writing the popular Psalm known as 'The Lord is My Shepherd'. What number is the Psalm (NKJV & NIV)?

David is credited with writing more than seventy Psalms, but Psalm 23, known as 'The Lord is My Shepherd' is the most popular. This even though it consists of only six verses.

It's impossible to come up with an exact total of the number of Psalms David wrote as many of the Psalms do not have credit lines. The numbers vary, with different Websites giving a different total for David's contributions. However, the consensus appears to be that David wrote more than seventy Psalms at the very least. According to notes in the NKJV Study Bible, some of the other Palmists include Ethan, Heman, Moses and Asaph as well as Solomon, who is credited with writing two of the Psalms -- Numbers 72 and 127.
5. What prophet of God made the following statement in the Old Testament? "He will feed His flock like a shepherd; He will gather the lambs with His arm, And carry them in His bosom, And gently lead those who are with young."

Isaiah is the correct answer the with the words found in Isaiah 40:11. Many Christians believe the verse is prophecy pertaining to the Lord Jesus Christ, who described Himself as the Good Shepherd.

According to Isaiah 40:1, Isaiah was the son of Amoz and prophesied in the days of Uzziah, Jotham, Ahaz, and Hezekiah, kings of Judah.
6. What prophet of God said, "Strike the Shepherd, and the sheep will be scattered"?

Many Christians believe the book of Zechariah contains a number of prophecies pertaining to the Lord Jesus Christ. According to notes in the NKJV Study Bible, passages such as 9:9-10, 11:11-13, 12:10 and 13:7 are all in reference to Christ. Meanwhile, it is believed by many Chapter 14 prophesies about Jesus coming as a "Judge" and "righteous King."
7. In two different Gospels, Jesus tells a parable about a shepherd with one hundred sheep when one of them goes missing. In what two Gospels do you find the parable?

The Parable of the Lost Sheep is found in Matthew 18:10-14 and Luke 15:1-7. In the popular parable, a shepherd has a flock of one hundred sheep and loses one of them. The shepherd goes looking for the missing animal and eventually finds it, bringing it back to safety.

I remember reading Luke 15:1-7 many years ago; the message penetrated to my inner core and my life would never be the same again. The passage in the NKJV concludes with this statement by Jesus: "I say to you that likewise there will be more joy in heaven over one sinner who repents than over ninety-nine just persons who need no repentance."
8. According to John 21:15-17, who did Jesus command to feed His sheep?

Jesus commanded Peter to feed His sheep, as per John 21:15-17. Christ made the request during one of His appearances after His resurrection. In this case, He appeared to a group of the disciples who were fishing on the Sea of Galilee. While they were dining on the shore, Jesus had a conversation with Peter. Three times during the conversation Jesus asked Peter if he loved Him, and three times Peter responded by saying he loved Him.

After Peter declared his love the first time, Jesus instructed Peter to "Feed My lambs." After the second time, Jesus said to Peter, "Tend My sheep." On the third occasion, Jesus said, "Feed My sheep."
9. According to Matthew 9:36, who had compassion on the people because they were "weary and scattered like sheep having no shepherd?"

Jesus, of course, is the correct answer. Matthew 9:35-38 tells of Jesus travelling about Israel preaching the gospel of the kingdom and "healing every sickness and every disease among the people." Verse 36 goes on to state: "But when He saw the multitudes, He was moved with compassion for them, because they were weary and scattered, like sheep having no shepherd."

The passage concludes with Jesus telling His disciples, "The harvest truly is plentiful, but the laborers are few" and that they should pray for more laborers.
10. Jesus made the following statement: "I am the good shepherd. The good shepherd gives His life for the sheep." In what Gospel do you read such a statement?

True to His statement, Jesus ended up giving His life for His sheep. To put the verse in context, I recommend reading John 10:11-18.
Source: Author Cowrofl 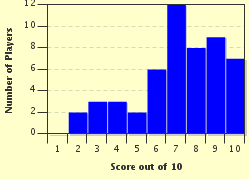