What types of jobs or occupations are mentioned in the King James Version? Most of these Biblical characters are well-known, some are not. But do you know their occupations?

Quiz Answer Key and Fun Facts
1. After the flood, what occupation did Noah pursue?

Noah started farming, and planted a vineyard. He became drunk on his own wine. Genesis 9:20,21
2. Which of these is correct regarding Cain and Abel, the sons of Adam and Eve?


Answer: Cain was a farmer; Abel was a shepherd


Answer: governor of the land

He was appointed as the governor over all the land, second only to Pharaoh. Genesis 41:40-44, 42:6
4. God instructed Samuel to anoint Saul as Israel's first what?

Samuel's sons were all judges, but the people were displeased with them. They demanded a king, like the other nations had. I Samuel 8:5 - 11:15
5. Saul first had David summoned to him because he had learned that David was highly skilled as a what?

It was David's skill at playing the harp that earned him a place in Saul's presence. Saul was troubled and needed his spirit soothed. But the first job he was given was as Saul's armor-bearer. I Samuel 16:14-23
6. Peter, Andrew, James and John were all fishermen, but what was the occupation of another disciple named Levi, or Matthew?

Jesus saw him sitting at the tax office and told Levi to follow Him. Mark 2:14
7. Before He became a teacher, Jesus learned what skill from his earthly father, Joseph?

While there is only one indirect reference to Him being a carpenter, it is generally accepted that He would have worked along with Joseph, learning the trade of a carpenter. Mark 6:3
Career-hopping was rarely seen in those days.
8. A woman in Thyatira, named Lydia, believed and was baptized by Paul. What was her occupation?

She was a seller of purple, an expensive cloth. Acts 16:14,15
9. The apostle Paul had learned a craft before he became a hunter of Christians and then a preacher. What was Paul's craft?

When he visited Aquila and Priscilla in Corinth, he stayed with them and worked for them because "he was of the same craft ... for they were tentmakers." Acts 18:3
10. The apostle Peter was summoned from a nearby town to come to see a woman in Joppa named Tabitha, or Dorcas, who had became sick and died. When he arrived, many widows were weeping and showed him things that were made by Dorcas. What was her occupation?

The widows showed him the coats and garments Dorcas had made for them. Peter prayed and spoke to her and raised her from the dead. Acts 9:36-41
Source: Author ssabreman 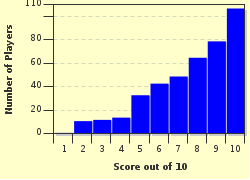 
Other Destinations
Explore Other Quizzes by ssabreman