Biblical What Was My Line Trivia Quiz

Using your best Human Resource skills, match the clues to the correct occupation. The New King James Version of the Bible and the Holman Bible Dictionary were used for reference.

Quiz Answer Key and Fun Facts
1. I assisted in the delivery of babies. Pharaoh wanted me to kill all the male Israelite babies. What was my line?

In Exodus 1:15-21, the Hebrew midwives Shiphrah and Puah refused to carry out Pharaoh's extermination plan.
2. I assisted temple attendees by swapping their currency for the proper temple currency. One day in the temple area, Jesus turned my table over. What was my line?

In Mark 11:15-18, we find the story of the money changer's tables and Jesus.
3. I served the King's wine and made sure it wasn't poisoned. Joseph and I were in prison together. What was my line?

In Genesis 40, while he was in prison, Joseph gave dream interpretations to the cupbearer and baker.
4. I made portable homes for nomads. Paul was trained in the same occupation. What was my line?

In Acts 18, Paul found Aquila and Priscilla, who were also tentmakers, and worked with them for awhile.
5. I moved my ship back and forth on the sea from port to port, with loads of merchandise and sometimes passengers. Jonah was thrown off the ship by my fellow workers. What was my line?

The Book of Jonah includes the story of Jonah, the ship, the storm, the sailors and the big fish. The sailors appear in chapter 1.
6. I assisted my assigned warrior, during battle. Saul fell on his own sword because his "assistant", a man in my own line of work, refused to end the King's life. What was my line?

The end of Saul's life is recorded in 2 Samuel 31. Saul had been severely wounded and didn't want the Philistines to capture him alive. He asked his armorbearer to take his sword and end Saul's life, but the armorbearer refused. After seeing Saul had fallen on his sword, the armorbearer also fell on his own sword.
7. I wrote the words of others in books, letters and records. Baruch also wrote for others, like me. What was my line?

In Jeremiah 36, Baruch wrote Jeremiah's scroll twice, because King Jehoiakim destroyed the first copy.
8. I led the Israelites through a time of trouble. Othniel was the first, Deborah was the only woman, and Samuel was the last. What was my line?

The Book of Judges begins with the death of Joshua, then cycles through corruption and salvation and back again. In 1 Samuel, the transition from judges to kings is covered, with Samuel playing a major part.
9. I was in charge of all the prisoners in the prison. Paul had to reassure me that he was still there after the earthquake. What was my line?

Acts 16:25-32 tells the story of Paul and Silas in the Philippian jail, the earthquake and the jailer who was saved.
10. I was employed by the Romans and was allowed to keep all monies over the levy. Matthew and Zacchaeus held this job. What was my line?

Zacchaeus was a chief tax collector; see Luke 19:2. Matthew was also one of the 12 Disciples; see Matthew 9:9-13.
Source: Author spice2 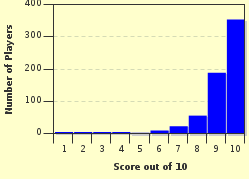 
Other Destinations
Explore Other Quizzes by spice2