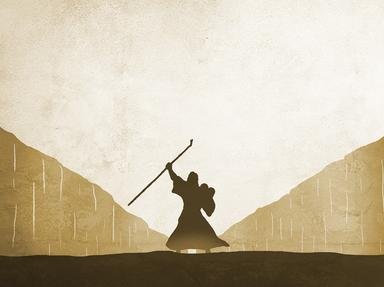 Hi! This quiz is taken from Exodus chapter 1 and chapter 2. I used the King James version for this quiz. Let's find out how much you know from these two chapters.

Exodus 1:11- "Therefore they did set over them taskmasters to afflict them with there burdens. And they built for Pharaoh treasure cities, Pithom and
Raamses."
2. What are the names of the Hebrew midwifes?

Exodus 1:15- "And the king of Egypt spake to the Hebrew midwifes, of which the name of one was Shiphrah, and the name of the other Puah."

Sarah, Rebekah, Leah and Rachel are names from Genesis. Miriam and Zipporah are family members of Moses.
3. What was the ark Moses was laid in made of?

Exodus 2:3- "And when she could no longer hide him, she took for him an ark of bulrushes, and daubed it with slime and with pitch, and put the child therein; and she laid it in the flags by the river brink."
4. How long was Moses hidden by his mother?

Exodus 2:2- "And the woman conceived, and bare a son: and when she saw that he was a goodly child, she hid him for three months."

She did this as there was a rule to kill the male babies, from Pharaoh.
5. What is the meaning of Moses in English?

Exodus 2:10- Pharaoh's daughter named him Moses because she drew him out of water.
6. To where did Moses flee after killing the Egyptian?

Exodus 2:15- "Now when Pharaoh heard these things, he sought to slay Moses. But Moses fled from the face of Pharaoh, and dwelt in the land of Midian: and he sat down by a well."
7. What is the name of the priest of Midian?

Exodus 2:21- "And Moses was content to dwell with the man: and he gave Moses Zipporah."
Miriam is his sister and Shiphrah and Puah are the midwives.
9. What is the name of the son of Moses?

Exodus 2:22- "And she bare him a son, and he called his name Gershom."
10. What is the meaning of Gershom in English?

Exodus 2:22- Moses named his son Gershom meaning stranger saying "I have been a stranger in a strange land."
Source: Author Liza543 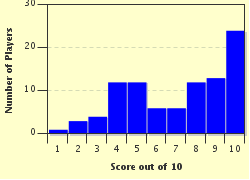 
Other Destinations
Explore Other Quizzes by Liza543