What Child Is This? Trivia Quiz

Go back to your Sunday School days and revisit some favorite Bible stories that involve children who became great servants of God. Any Bible references are from the KJV.

Quiz Answer Key and Fun Facts
1. What child, along with his mother Hagar, was banished from his father's home to the wilderness?

Genesis 15 records Ishmael as the son of Abraham and his wife Sarah's handmaid Hagar. Genesis 21 tells how after Abraham and Sarah had a son, Isaac, Sarah didn't want Ishmael in the household and ordered Abraham to send the boy and his mother into the wilderness.

When the food and water ran out, Hagar put her child under a bush so she didn't have to watch him die, but God intervened and saved the boy. Ishmael later married and fathered twelve sons who became tribal chiefs throughout Assyria.
2. What child, who was sold into slavery by his brothers, gained favor in a ruler's household because he could interpret dreams?

The story of Joseph is found in Genesis 37 and 39-40. He was sold in Egypt by slave traders to Potiphar who was the captain of Pharaoh's guard. Joseph became overseer of Potiphar's household, but was imprisoned when Potiphar's wife falsely accused him of making sexual advances toward her.

While there, he interpreted dreams of two other prisoners, Pharaoh's chief cupbearer and chief baker, which led to him being called to interpret the Pharaoh's dreams.
3. What child, who was hidden in an Egyptian river, was raised by his mother for a king's daughter?

The account of Moses' birth can be found in Exodus 2. Because the King of Egypt had ordered all male babies to be killed, Moses' mother hid him in the Nile River and had his sister Miriam watch over him. When the king's daughter found him and claimed him as her own, Miriam came forward and said she knew of a woman who could nurse the baby - his own mother, of course.

At a later age, Moses was chosen by God to lead the Hebrew people out of slavery in Egypt.
4. What child, whose mother brought him a coat every year, was raised by the priest Eli?

I Samuel 1-2 tells how Hannah was barren, but after promising to dedicate her child to God, she became pregnant and bore a son she named Samuel. After a time she brought the child to Eli for rearing. Samuel became a judge and later a prophet. He also anointed Saul and David, the first two kings of Israel.
5. What child, who had seven older brothers, was chosen as the second king of Israel?

As a young boy, David's job was shepherding. When the prophet Samuel, as recorded in 1 Samuel 16, came to Jesse's home to find King Saul's successor, he was surprised when God told him that it would be the youngest of the eight sons that was to become the second king of Israel. From the time David was anointed until he actually became the king, King Saul was his enemy.

More than once David had the opportunity to kill Saul but did not harm him because he knew Saul was still God's chosen king.
6. What child, whose grandfather was a king, became lame after his nurse fell while carrying him?

Mephibosheth's father and grandfather were Jonathan and Saul respectively. After receiving news that both Jonathan and Saul had died in battle, the nurse took five year-old and Mephibosheth and fled for safety. II Samuel 4 tells how it was during this escape that the accident occurred that caused his lameness.

After several years, King David found out that Mephibosheth was alive and had him brought to live at the palace.
7. What child, who was hidden to protect him from the massacre of his family, became King of Judah when he was seven years old?

Jehoram who worshiped God, and his wife Athaliah who worshiped Baal, were the grandparents of Joash. When Jehoram died, his son Ahaziah became king, and Athaliah used her power as queen mother to further the practice of Baal worship. When Ahaziah was killed she ordered all of his descendants to also be killed, but little Joash was saved by an aunt.

He was raised by the priest Jehoiada who brought him out of hiding at age seven and proclaimed him as the rightful king. Athaliah met her death during her efforts to stop Joash from becoming king.

These events are found in II Chronicles 21-24.
8. What child, whose father King Amon was assassinated, became king of Judah at age eight?

Josiah's reign of thirty-one years, as found in II Chronicles 34-35, ended when he died as the result of a battle. During his reign he ordered a restoration of the Temple, and in the process a scroll containing "the words of the Lord" was found. King Josiah called all the people together for a reading of the scroll.

He was a faithful follower of God and did much to wipe out the worship of pagan gods.
9. What child, whose father was struck dumb until after he was born, was possibly a cousin to Jesus?

Luke 1 tells that when the angel Gabriel told the priest Zacharias that he and his barren wife Elisabeth were going to have a child at their advanced age, Zacharias was in disbelief and asked for a sign to prove this was true. At that point his ability to speak was taken away and not restored until the son John was born. Christians describe John as a "forerunner of Jesus" because he prophesied about the coming Messiah. An account of John baptizing Jesus is given in each of the Four Gospels.
10. What child, who went with his parents to Jerusalem when he was twelve years old, became lost and was later found discussing topics with some of Jerusalem's elders?

Luke 2 tells the story. Joseph and Mary and their son Jesus had journeyed to Jerusalem with a group for the yearly celebration of Passover. Men and women usually traveled in separate groups which could help explain why Jesus was not missed right away on the return trip.

He had spent the time in the Temple questioning the scribes or "wise men of the law", showing that even at this young age, he was aware of the reason he had been sent to Earth by his Heavenly Father.
Source: Author unterkircher 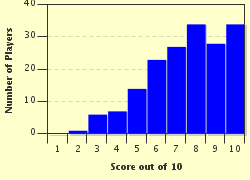 Related Quizzes
1. Handmaidens, Servants and Slaves in the Bible Average
2. The Devil Made Them Do It? Average
3. Children of the Bible Average
4. Brave or Maybe Not so Much Average
5. A Quick Look at Ten Women in Acts & Paul's Letters Average
6. Bible People In the Same Book -- #3 Average
7. Hey, I Did That Too! Average
8. Witches, Wizards, and Sorcerers of the Bible Tough
9. But They Seemed Like Such Nice People! Average
10. The Kindness of a Stranger Easier
11. Children in the Old & New Testaments -- #3 Average
12. You Can Be One Too Average


Other Destinations
Explore Other Quizzes by unterkircher