Who Did It: Was it Abraham, Isaac or Jacob? Quiz

Abraham, Isaac and Jacob are three men prominently featured in the Book of Genesis. How much do you know about the trio? (The NKJV and the NIV were used for this quiz.)

Quiz Answer Key and Fun Facts
1. According to the Book of Genesis, a man and his wife were the parents of twins. Who was the man? Was it Abraham, Isaac or Jacob?

Isaac is the correct answer. According to Scripture, he and his wife Rebekah were the parents of Esau and Jacob. The account of Rebekah giving birth to the twins is found in the 25th chapter of Genesis. According to Scripture, Esau became a skillful hunter while Jacob was content to stay at home among the tents. The two boys are the first twins born in the Bible.
2. According to the Book of Genesis, a man wrestled with God. Who was the man? Was it Abraham, Isaac or Jacob?

Jacob is the correct answer. The account of him wrestling with God is found in the 32nd chapter of Genesis. Here's how the incident is reported in Genesis 32:24-32 in the NKJV Bible:

"Then Jacob was left alone; and a Man wrestled with him until the breaking of day. Now when He saw that He did not prevail against him, He touched the socket of his hip; and the socket of Jacob's hip was out of joint as He wrestled with him. And He said, 'Let Me go, for the day breaks.' But he said, 'I will not let You go unless You bless me!' So He said to him, 'What is your name?' He said, 'Jacob.' And He said, 'Your name shall no longer be called Jacob, but Israel; for you have struggled with God and with men, and have prevailed.' Then Jacob asked, saying, 'Tell me Your name, I pray.' And He said, 'Why is it that you ask about My name?' And He blessed him there. So Jacob called the name of the place Peniel: 'For I have seen God face to face, and my life is preserved.' Just as he crossed over Peniel the sun rose on him, and he limped on his hip. Therefore to this day the children of Israel do not eat the muscle that shrank, which is on the hip socket, because He touched the socket of Jacob's hip in the muscle that shrank."
3. According to the Book of Genesis, a man was the father of twelve sons with each one becoming a founder of the Twelve Tribes of Israel. Who was the man? Was it Abraham, Isaac or Jacob?

Jacob is the correct answer. He was married to sisters Leah and Rachel and eventually was given permission to sleep with his wives' two maidservants for the purpose of creating children. The maidservants were Bilhah and Zilpah.

The names of his twelve sons are Reuben, Simeon, Levi, Judah, Dan, Naphtali, Gad, Asher, Issachar, Zebulun, Joseph, and Benjamin. The names of the sons are found in Genesis 35:23-26. Jacob and Leah were also parents of a daughter, Dinah, as per Genesis 30:19-21.
4. According to the Book of Genesis, a man was falsely accused of attempted rape and thrown in prison in Egypt. Who was it? Was it Abraham, Isaac or Jacob?

The correct answer is none of them. Joseph, the son of Jacob, is the one who was accused of attempted rape by Potiphar's wife, according to the 39th chapter of Genesis.

Potiphar's wife attempted to seduce Joseph and when she was spurned, she accused him of trying to force himself onto her. Joseph fled after the woman attempted to lure him into bed with her, and he left behind his cloak. Shortly later, the woman produced Joseph's clothing to Potiphar, citing it as proof Joseph had attempted to make sport of her.

Joseph would end up going to prison but would eventually win his freedom and end up becoming the second most powerful man in Egypt, surpassed by only the Pharaoh, as per Genesis 41:40.
5. The names Abraham, Isaac and Jacob can be all found in the New Testament.

The names of the three men are also mentioned in the genealogy of Christ in the first chapter of Matthew and the third chapter of Luke.
6. According to the Book of Genesis, a man was about to sacrifice his son, when at the last moment an angel of God intervened and a nearby ram caught in a thicket ended up becoming the offering. Who was the man? Was it Abraham, Isaac or Jacob?

After the angel called out, Abraham spotted a ram in the thicket and used it as his sacrificial offering.

The story is told in the 22nd chapter of Genesis. Many Christians compare this episode to God's sacrifice of His own son, Jesus, in the New Testament.
7. According to the Book of Genesis, a man, with the help of his mother, cheated his brother out of receiving his father's blessing. Who was the man? Was it Abraham, Isaac or Jacob?

Jacob is the correct answer. He cheated Esau out of the blessing largely as a result of his mother's conniving. Rebekah, as per Genesis 27:1-40, came up with a plan so Jacob would receive the blessing from Isaac, who was elderly and frail at the time.

According to Scripture, Esau and Jacob were the first twins. Up to this point, no twins are mentioned in Scripture. They may have been twin brothers, but there was definitely bitter feuding between them. Esau was favored by his father Isaac while Jacob was favored by his mother Rebekah. After fraudulently receiving his father's blessing, Jacob ended up fleeing as Esau plotted to kill him, according to Scripture.
8. In making an appearance before Moses in Exodus 3:6, God describes Himself as "the God of your father, the God of Abraham, the God of Isaac and the God of Jacob."

True. According to Scripture, the three men -- Abraham, Isaac and Jacob -- are mentioned by God in His communication with Moses. The verse goes on to state Moses was so afraid he hid his face from God. The interaction took place prior to Moses going to the Pharaoh of Egypt to request permission for the Israelites to leave.
9. Abraham, Isaac and Jacob, at one time or another, all lived in Egypt.

Abraham and his wife Sarah as well as Jacob and his sons lived in Egypt, but such wasn't the case for Isaac and Rebekah.

Abraham and his wife Sarah lived there, as per the 12th chapter of Genesis. According to Scripture, Abram and Sari, who later became known as Abraham and Sarah, were forced to move to Egypt due to a famine.

And Jacob and his sons lived in Egypt where he was elderly, as per the 46th chapter of Genesis. Jacob and his family moved to Egypt to be with Joseph, of course.

It appears Isaac and Rebekah were definitely thinking about moving to Egypt, as per the 26th chapter of Genesis. Isaac and his wife Rebekah lived there, as per the 26th chapter of Genesis. According to Scripture, there was a famine at the time and Isaac had to move on. However, God told him not to head to Egypt. Genesis 26:1-7 in the NKJV states: "There was a famine in the land, besides the first famine that was in the days of Abraham. And Isaac went to Abimelech king of the Philistines, in Gerar. Then the LORD appeared to him and said: 'Do not go down to Egypt; live in the land of which I shall tell you. Dwell in this land, and I will be with you and bless you; for to you and your descendants I give all these lands, and I will perform the oath which I swore to Abraham your father. And I will make your descendants multiply as the stars of heaven; I will give to your descendants all these lands; and in your seed all the nations of the earth shall be blessed; because Abraham obeyed My voice and kept My charge, My commandments, My statutes, and My laws.' So Isaac dwelt in Gerar."
10. According to the Book of Genesis, a man fathered a son at the age of 100. Who was the man? Was it Abraham, Isaac or Jacob?

Abraham is the correct answer. His wife Sarah was no spring chicken at the time either. She was 90 years old.

When Abraham heard the pronouncement that he would become a father at age 100, he was extremely skeptical. Genesis 17:17 in the NIV Bible, states: "Abraham fell facedown; he laughed and said to himself, 'Will a son be born to a man a hundred years old? Will Sarah bear a child at the age of ninety?'"
Source: Author Cowrofl 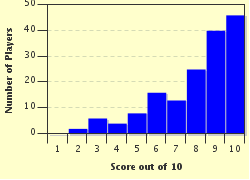