Women in the Book of Genesis Trivia Quiz

See how well you know the most prominent women in the book of Genesis (New King James Version) and what they did!

Genesis 3 - Eve took the fruit off the tree, ate it, and shared it with Adam.
2. The wife of Abraham; she laughed when she heard she was going to have a child.

Genesis 18:2-14 - When three men came to visit Abraham, they told him that Sarah would have a son. She was listening behind the tent door and laughed. The men heard this and Abraham reprimanded her.
3. She helped deceive her husband by putting goat skin on her youngest son.

Genesis 27 - Instead of wanting her first born, Esau, to have the blessing, Rebekah wanted her favorite son, Jacob, to be blessed by Issac.
4. The mother of Ishmael; she was also the servant of Sarah.

Genesis 21 - Sarah did not believe she would have a son so she gave Hagar to Abraham to produce an heir. She did and her son's name was Ishmael.
5. She was the third wife of Abraham.

Genesis 25:1&2 - Did you know that Abraham had another wife? After Sarah died, Abraham married Keturah and she had six sons.
6. What is the name of the first wife of Jacob?

Genesis 34 - Dinah was raped and her brothers took their revenge on Shechem.
8. She was the wife of Er; she posed as a prostitute.

Genesis 38 - Judah chose Tamar to marry his son Er. After Er had died, she posed as prostitute and became pregnant by her father-in-law.
9. This woman tempted Joseph.

Genesis 39:7-14 - While Joseph was working for Potiphar, his wife tempted him to sin with her.
10. Leah was Jacob's favorite wife. 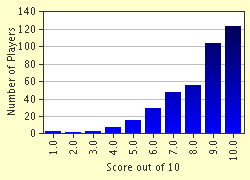 
Other Destinations
Explore Other Quizzes by Legola12