This quiz has random biology questions from biochemistry, evolution, genetics, and other areas.

Quiz Answer Key and Fun Facts
1. Charles Darwin's process of natural selection is often described as being equivalent to which type of process, although he never used it himself?


Answer: Survival of the fittest

Natural selection and survival of the fittest are ways of saying the same thing: individuals that are better suited to their environment reproduce and survive successfully in that environment. Artificial selection is similar but humans breed useful traits from natural variations among the many organisms that survive.
2. What's the cure for Down syndrome?


Answer: There is no cure for Down syndrome

Down syndrome is not curable because it's a genetic disorder. It's impossible to get a chromosome added or taken away from your DNA after you're conceived. Someone who has Down syndrome has a trisomy (three copies) of chromosome 21.
3. Which structure in mollusks contains internal organs below the mantle?

The radula of a mollusk is the tongue-shaped structure in which they feed off of other organisms (common in snails and slugs). The siphon is the tubelike structure where water starts to enter the body and then leaves it. The shell of a mollusks secretes calcium carbonate.
4. Which phase of mitosis occurs when chromosomes disperse into chromatin and when two new nuclei form?

Telophase also occurs at the same time as cytokinesis. Once telophase is complete, mitosis is also complete but cell division isn't complete yet. Cytokinesis must finish in order for cells to divide.
5. Which organelle is a packaging center for proteins in a cell?

The Golgi Apparatus also modifies and sorts proteins. If you picture the Golgi Apparatus, think about a stack of pancakes. Lysosomes are where most enzymes are, Vacuoles are saclike structures that store water, salts, carbohydrates and proteins, and mitochondria convert chemical energy into compounds that are useful for a cell.
6. Which of these states is when the concentration of a solute in a system is equal on both sides of a cell membrane?

Even when the concentration of a solute reaches an equilibrium point, particles will still move across the membrane.
7. What, with the addition of light, is the formula for photosynthesis?

The reactants in photosynthesis, the process by which plants get energy, are water and carbon dioxide while the products are sugar and oxygen. The reactants of cellular respiration are sugar and oxygen while the products of cellular respiration are water and carbon dioxide.
8. Here's a biochemistry question. If water sticks to glass, which process is this an example of?

Water is cohesive since it has many molecules that attract to each other but it is also adhesive because it can stick to other surfaces, like glass. Understanding the behavior of water is very important for biochemistry.
9. Which famous scientist laid the foundations for what became genetics by using his pea plants?

Gregor Mendel didn't only experiment with pea plants, but he also used probability to see outcomes for crosses between the pea plants. His studies were the basis of modern genetics.
10. How was Darwin's theory of evolution related to Charles Lyell's book "Principles of Geology?"

It can take a lot of time for a species to respond and survive in their environment, and to adapt via evolution. Lyell's book was published in the 1830s and the long time scales he proposed for geological processes helped inspire Darwin's insights.
Source: Author Bloodninja 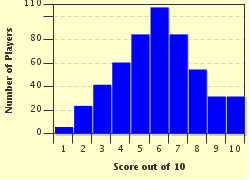 
Other Destinations
Explore Other Quizzes by Bloodninja