Let's take a quiz about that magnificent body part...the tongue. While you may not have ever given much thought to the tongue, here are some questions about it, complete with a little tongue in cheek humor.

Quiz Answer Key and Fun Facts
1. What is the condition lingua villosa nigra commonly known as?

While the condition known as 'Black Hairy Tongue' is rather alarming to see, it is completely harmless. It is usually caused by poor oral hygiene resulting in too much yeast or bacteria growing in the mouth. This bacteria builds up on the papillae which prevents the papillae from shedding.

The bacteria builds up and starts turning black. The papillae grow and lengthen and get become up to 15 times their normal length. This disorder is more common in smokers and those who are heavy coffee or tea drinkers.

It can also occur after receiving radiation to the head or neck, and can also be a side-effect of some antibiotics.
2. The giraffe has a tongue so long, that it can clean its own ears.

The giraffe has a tongue that is usually about 20 inches or 50 centimeters long. This long tongue is used to pluck leaves from the thorny acacia tree, and occasionally to clean the ears and/or nose. The front of the tongue is usually a purplish-black color that graduates to pink in the back. Fortunately the giraffe has thickened papillae on its tongue along with very thick syrupy saliva.

These attributes work together allowing the giraffe to live in areas that other animals would find inhospitable.
3. Which of the following disorders may cause you to bite your tongue severely?

Any condition that may cause seizures, including epilepsy, may cause the sufferer to bite his tongue. The tongue can swell and fill the mouth and the areas of the bite can be very painful. As the tongue is one of the fastest healing areas of the body, a tongue bite usually heals within a week. Chronic tongue biting can cause permanent scarring of the tongue, resulting in loss of taste in areas which are damaged.
4. "Hairy" leukoplakia is a rare tongue disorder that is usually only seen in which of the following populations?


Answer: Those who have HIV or AIDS

This disorder is not painful, but can ruin the taste of many types of food and drink. The tongue in this photo has a mild case of the disorder, in a chronic case, the tongue can appear to be almost completely covered in white hair.
5. Which one of these statements about a crocodiles tongue is true?


Answer: A crocodile cannot stick out its tongue.

A crocodile is unable to stick out its tongue because of the way it is attached to its mouth. It can use its tongue to hold hatchlings and to help swallow prey. The tongues of crocodiles are usually yellow or orange in color. This is possibly a warning to other animals, even though one might think that the teeth surrounding a crocodile's tongue would be warning enough.

The crocodile also has chemoreceptors which line its tongue and help the animal detect prey underwater.
6. Dysgeusia is a diagnosis which is used to describe which of symptoms?


Answer: Distortion of the sense of taste.

Dysgeusia is the term used to describe distortion and/or partial loss of taste. Some of the most common causes are radiation therapy, certain medications, gum disease and chemotherapy. Decreased flow of saliva, for any reason, can also result in dysgeusia.

This is usually a temporary condition that goes away in a few months. For those patients who have had radiation of the head, neck, or salivary glands, this may become a permanent condition.
7. Which of the following scholarly sounding names is a common condition that is displayed by the tongue in this photo?

Geographic tongue is a harmless condition that is the result of the loss of papillae on the tongue. These patches can change shape, creating a somewhat bizarre appearance to the tongue. This disorder is common, and is not thought to be a precursor to any type of oral cancer.

Some spicy foods may cause a burning sensation in areas of depapillation. This is a poorly understood condition, but is thought to be completely harmless.
8. Which one of these diseases often manifests itself as a chancre on the tongue?

One of the first symptoms of oral syphilis is often an open sore on the tongue or lips known as a chancre. This contagious disease us usually transferred through the co-mingling of bodily fluids. Syphilis chancres are usually painless and easily overlooked at first. If left untreated they will become ulcerated and the disease will spread quickly, although they will sometimes appear to heal all by themselves. Syphilis is a deadly disease that can cause insanity and death. If you suspect that you might have oral syphilis, a visit to your physician is a must.
9. What is the term for the small flap of skin which attaches your tongue to the bottom of your mouth?

An overgrown frenulum may restrict tongue movement and cause problems with eating as well as cause some types of speech impediments. A frenectomy or frenuloplasty is usually done by laser in the office of a dental surgeon. In the past it was done by cutting the frenulum which allowed for much more freedom of movement for the tongue. Stitches are usually not required and the tongue is completely healed within a week.
10. Properly known as Lingua Plicata, what is the more common term for the benign tongue disorder that is displayed in this image?

Fissured tongue is a painless (usually) disorder of the tongue that appears in about 4% of the world population. Men are twice as likely as women to display a fissured tongue as are people who have Down's Syndrome or oral Psoriasis. This is just a variation in the appearance of the human tongue and is usually not a matter of concern. Those with a fissured tongue may be more prone to halitosis (bad breath) and should be extra vigilant when engaging in daily oral care.
Source: Author dcpddc478 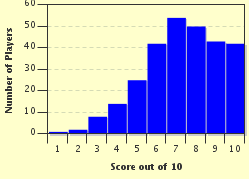