This quiz tests your familiarity with concepts and terms of basic biology. This is an acrostic quiz: the first question asks for a nine-letter word, and the first letter of each answer to questions 2-10 following spell out that word.

Quiz Answer Key and Fun Facts
1. An _________ organism does not require oxygen for growth.

Anaerobic means "without air." Mammals, fish, and insects all require oxygen to grow. Some kinds of bacteria and archaea do not need oxygen; in fact, some types die in the presence of oxygen.
2. What is the name of the inner membrane of an organism that contains a developing fetus and its protective fluid?

The amniotic sac contains the amniotic fluid that protects the fetus. the outer membrane of this sac is called the chorion.

Wrong answers: An allele is a DNA sequence. Anemia is a disorder of the red blood cells. An antigen is a substance that triggers an immune response.
3. Which of the following organelles can be seen with a light microscope and a methylene blue stain?

The word "nucleus" comes from a Latin word meaning kernel, or little nut.

Wrong answers: the Golgi apparatus (or body) sorts and packages proteins. Mitochondria are responsible for ATP function. Neither of these organelles can be seen with a light microscope. A neutron is a non-charged particle in an atom, not an organelle at all.
4. If a multicellular organism digests food internally and its cells lack walls, that organism must be an...

Animals digest food internally (stomachs rule!) and their cells lack walls, which separates them from plants.

Wrong answers: algae do not digest food internally. Eukaryotes include animals AND plants AND fungus, so they're out. Archaeans are single-celled organisms, so they're out.
5. What protein lowers the activation energy of chemical reactions?

Wrong answers: an oocyte is an immature egg cell. The aorta is the greater vessel that carries blood to other arteries. Ecdysone is an insect hormone.
6. Found in both eukaryotic and prokaryotic cells, this synthesizes polypeptide chains into proteins.

Ribosomes consist of two subunits of rRNA and proteins.

Wrong answers: a rhizoid is an absorptive structure in fungi. A sarcomere is a protein system in muscles. Somites are the material that will become skin and muscles in vertebrate embryos.
7. The loss of electrons by a molecule, atom or ion is called:

Technically, oxidation is a change in an atom's oxidation number, but the typical definition is more or less accurate.

Wrong answers: osmosis is the diffusion of liquid between membranes. An organelle is a specialized compartment found in the cytoplasm of a cell. An ovary is a female reproductive organ.
8. Salts form when an acid interacts with a:

A salt is any compound that dissolves and releases ions other than H+ and OH-. For example, HCl (Hydrochloric acid, an acid) and NaOH (Sodium hydroxide, lye, a base) bond to form NaCl (Sodium chloride, table salt). The left over molecules are H, O and H, which is H2O, or water.

Wrong answers: an acid is a low pH material such as lime juice or cola. They don't form salts when they interact. A lipid is fatty compound (a nonpolar hydrocarbon), either saturated or unsaturated. A protein is a compound of amino acids.
9. Simple molecules not containing carbon chains or rings, such as water, sulfuric acid, and ammonia, are called...

Wrong answers: Organic molecules are the complement to inorganic molecules: they contain carbon atoms. Proteins are composed of many amino acids linked together; they are a type of organic compound. Ionic refers to the positive or negative charge of a group of atoms.
10. __________ are composed of simple sugars called monosaccharides.

Carbohydrates are a type of organic molecule composed of simple sugars. They help store and transport energy in plants and animals.

Wrong answers: lipids are compounds formed from fatty acids. Enzymes are a type of protein that accelerate chemical reactions in a cell. Nucleotides are chemical compounds that make up the building blocks of nucleic acids, such as DNA.
Source: Author ensiform 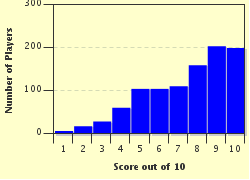 
Other Destinations
Explore Other Quizzes by ensiform