Taxonomy as defined by biologist Ernst Mayr, is the practice and theory of classifying organisms. Do you know which organisms belong to which categories? Have fun!

Quiz Answer Key and Fun Facts
1. Born in Sweden, he is known as the "father of taxonomy". Who is he?

Born in Sweden, Carolus Linnaeus started an entire new era in the field of taxonomy. He is particularly famous for his work- "Systema Naturae". Most of his works are in Latin.
2. Over many years various biologists contributed to the field of taxonomy. This subject provided the basis for various other branches of Biology, ranging from Zoology to Ecology to Bio-geography. Scientists such as Robert Whittaker, Carolus Linnaeus and Ernst Haeckel divided organisms into five broad categories called kingdoms. Which of the following is NOT a kingdom according to Whittaker?

The five kingdoms as classified by Robert Whittaker are:
1. Monera
2. Protista
3. Fungi
4. Plantae
5. Animalia
Monera are the most underdeveloped of all kingdoms. They consist of bacteria ranging from Bacillus Anthracis to Cynobacteria to Lactobacillus to Rhizobium.
Protista consist of unicellular algae and all forms of protozoans.
Fungi comprise moulds, yeasts, mushrooms and various other multicellular and saprophytic organisms.
Plantae comprise multicellular algae and plants. Animalia are animals.
3. Which does NOT belong to the kingdom Protista?

The kingdom Protista comprise unicellular and eukaryotic organisms. Many of them are aquatic. Some have hairlike cilia or whip-like flagella for their movement. Some are autotrophic, while others are heterotrophic. Familiar members of the kingdom Protista are amoeba, paramecium, and some disease causing microbes such as Leishmania that causes Kala-Azar and the protozoans that cause Malaria, Dengue, and Sleeping Sickness.
Marchantia are forms of algae that comes under the division Bryophyta.
4. Plants such as horse tails, ferns, marsilea belong to which division?

Pteridophytes are the oldest vascular plants. Their bodies comprise of an aerial shoot and an underground root system. They have multicellular reproductive organs. They reproduce by producing spores. This division comprises mainly of ferns and similar plants.
5. The word angiosperm is derived from two Greek words: "angio" and "sperma". What does one mean by the two?

The term Angiosperma literally translates to "Covered Seeds". Angiosperms are flowering plants. Their seeds are enclosed in fruits. Their ovules are located inside their ovaries and they have complete xylem and phloem, unlike gymnosperms whose xylem lack fibers and phloem lack companion cells.
6. Which one of the following is not a rule while writing the name of an organism, according to the principles of biological nomenclature?


Answer: The name of the class should be italicized.

Generally these organisms are known as flatworms. They are bilaterally symmetrical, triploblastic, dorsoventrally flattened, and are acoelomate. They have a gut with a mouth, but no anus. Special cells called flame cells constitute the excretory system. They lack a respiratory and a circulatory system.
Examples include Tapeworms (Taenia solium), Liver Flukes (Fasciola), and blood flukes (Schistosoma).
8. The sub-phylum Pisces comprises of organisms that are cold blooded, have two-chambered hearts, and respire through gills. Hence, this sub-phylum generally comprises of fishes. Pisces can be further divided into Osteichthyes and Chondricthyes. Which of the following is NOT one of the bases for classifying Pisces?

Pisces can be classified into:
1. Chondricthyes: They have an endoskeleton of cartilages. Their gills lack an operculum. They also have placoid scales. Examples include sharks, sting rays, torpedoes et cetera.
2. Osteichthyes: They have an endoskeleton of bones. Their gills have an operculum. They have ctenoid scales. Examples include salmons, tunas, trouts, herrings, carps et cetera.
9. Do Hemichordates belong to the phylum Chordata?

Hemichordata comprise a separate phylum by themselves. The members of this phylum include Acorn Worm (Balanoglossus) and Cephalodiscus. They are partial chordates. This means that they lack a notochord; but it may be present in some stages of their lives.
10. Which of the following is not an echinoderm?

Echinoderms are spiny skinned organisms. They are mainly marine animals, and have an exoskeleton of of calcareous plates. They are radially symmetrical and most of them are sessile. They have a water vascular system which is used for locomotion and feeding. Examples include: Antedon (feather star), Asterias (star fish), urchins (Echinus), and sea cucumbers (Holothuria).
Source: Author rohan007 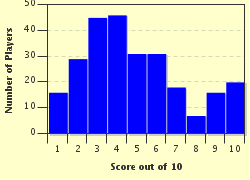 
Other Destinations
Explore Other Quizzes by rohan007