This quiz contains many questions based on what is taught in high school science courses. It will serve as a good review of these courses. So, c'mon let's play!

Quiz Answer Key and Fun Facts
1. In a human being, the organ of the body which carries out most of the digestion is which of these?

In human beings, most digestion takes place in the small intestines.
2. A concentration of carbon dioxide in the blood stimulates the breathing center in which part of the body?

The medulla oblongata is the part of the brain which controls breathing and circulation.
3. Which of these is a compound that is quickly absorbed through the walls of the stomach?

Alcohol is one of a very few substances very quickly absorbed after being ingested.
4. Research indicates that cigarette smoking results in which of the following conditions?

Cigarette smoking is generally associated with cardiovascular stress. The other conditions are produced by specific viruses.
5. Which of the following determines the sex of a human?

The sperm cell contains the particular chromosome which determines the sex of a human embryo.
6. Which of the following lacks a backbone?

A jellyfish is the only one of the possible choices which is an invertebrate.
7. A family has seven boys and one girl. What is the chance that the next child will be a girl?

Since each sperm can carry the X or Y chromosome with equal probability, sex determination for each birth is the same, 50 percent for a boy, and 50 percent for a girl.
8. Grass, (like that in your front yard) is usually pollinated by which of these?

The most common form of pollination of grasses is caused by the wind.
9. Which of the following is an antiseptic?

Iodine is an antiseptic and is used as a disinfectant in various forms.
10. A knee jerk response to a sharp blow is an example of which of these?

A reflex is an immediate response to a stimulus which takes place without thought or intent.
Source: Author cindynlace 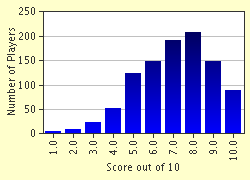 
Other Destinations
Explore Other Quizzes by cindynlace