The quiz material is beginner high school biology, taken in 8th, 9th or 10th grade. This quiz is based on the Regents Living Environment class in New York State.

Quiz Answer Key and Fun Facts
1. What is the substance cells use as an immediate source of energy for themselves?

Adenosine triphosphate (ATP) is produced by cells in the process of cellular respiration. In cellular respiration, glucose and oxygen in the presence of enzymes are transformed into carbon dioxide, water and ATP.
2. What disorder is caused by having three copies of chromosome 21?

Genetic disorders like Down syndrome can be detected by a karyotype, which is like a picture of paired chromosomes and clearly shows if there are any problems.
3. Which groups of words mean the same thing?

An autotroph is an organism that makes its own food, or a producer. Heterotrophs eat either autotrophs or other heterotrophs, making them consumers. An autotroph is not a carnivore because they don't eat meat, they make their own energy.
4. Respiration is the process cells use to turn food into usable energy. What is the correct formula for cellular respiration?

Cells can't use the glucose in food because the molecules are too large. Cellular respiration is used to turn the glucose into ATP, which cells can use for energy.
5. What is the cause of infectious diseases?

Infectious diseases occur when microorganisms like viruses, bacteria or fungi enter the body. Examples of infectious diseases are tuberculosis, influenza and smallpox.
6. RNA is made from DNA through transcription so the genetic code can be taken out of the nucleus to make proteins. Codons are the result of translation of RNA at the ribosomes. Of the four bases of DNA, which is not represented in RNA?

In the process of transcription, DNA is used to make RNA, a molecule that is used to make proteins, because DNA is trapped in the cell nucleus. The base uracil is substituted for thymine in RNA.
7. What is the cell division process that produces two new cells?

Mitosis is a process where a cell divides into two new daughter cells, each with the same number of chromosomes as the original. All cells except reproductive cells, which use meiosis, go through this process.
8. What is a eukaryotic cell?


Answer: cell with a nucleus

A eukaryotic cell has a nucleus and can be either a plant or animal cell. Other organelles include ribosomes, lysosomes, mitochondria and the cell membrane.
9. What does telomerase do in cells?

Telomeres, the end section of chromosomes, get a little shorter every time the cell divides. Telomerase reverses this process, causing the cells to be able to divide more than is usually possible, which could be a good or bad thing. In theory, it could provide cells that never age, but researchers have found that telomerase is also a possible cause of cancer.
10. What organelle stores waste in cells?

Vacuoles are found in both plant and animal cells, but they are much bigger in plant cells. Ribosomes build proteins, golgi bodies package materials and mitochondria release energy so the cell can use it. I hope you liked my quiz!
Source: Author redsoxrock88 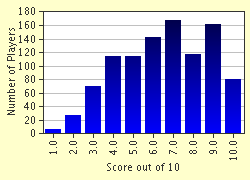 
Other Destinations
Explore Other Quizzes by redsoxrock88