We will go over some major breakthroughs in the field of biology. The questions are diverse, just like the answers.

Quiz Answer Key and Fun Facts
1. Who was the first person to observe bacteria?

Scientists believe that the ancient Botai people in northern Kazakhstan domesticated the horse almost six thousand years ago. The skeletal remains of the horse were found in the steppes of the Ural mountains in central Asia.
3. Who was the first person to realize that plants absorb oxygen at night and carbon dioxide during the day?

Jan Ingenhousz was a 18th century Dutch physician and scientist. He discovered that plants go through a process called photosynthesis. Photosynthesis is when a plant converts light energy to chemical energy and stores it in bonds of sugar.
4. What medical school was the first to have a patent issued for a vertebrate?

In 1988, genetic engineers at Harvard medical school went through the whole patent process for a mouse. There would be books later devoted entirely to the genetics of mice.
5. Where was the first veterinary school founded?

The first veterinary school was founded in the early 1760's. The first animal treated there was a horse in 1793. In 1791, the Royal Veterinary College opened in England as a division of the University of London.
6. Who was the first person to discover chloroplasts in plants?

Julius Von Sachs discovered chloroplasts in plants in 1865. He was a founder of experimental plant physiology. 1865 was a good year for science, Gregor Mendel also introduced his work in the field of heredity.
7. What mineral was added to the required plant nutrition list in 1992?

The early 1990's were ablaze in scientific advancement. It was discovered that leaf chlorophyll concentrations were low in plants without nickel supplemented, so it was added. In 1992, it was revealed that vitamins help plants withstand stress and breakage.
8. Who was the first scientist to study regeneration in freshwater polyps (hydra)?

Abraham Trembley was a Swiss naturalist who worked with hydra quite often. In 1744, Trembley discovered regeneration in polyps. He passed away in 1784.
9. Where was the first botanic garden founded?

You can say the botanic garden opened officially in 1333. The emergence of this garden and future ones were essential to the development of the science of botany. The first botanic gardens were used for herbs.
10. Where was the first all female vertebrate species discovered?

It turns out that the lizard was first all female vertebrate species discovered in 1958. They managed to reproduce without fertilization by male sperm. I hope you all learned some fascinating facts and enjoyed my quiz!
Source: Author Yankeegirl742 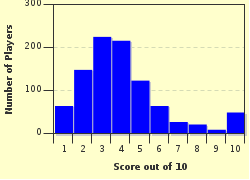 
Other Destinations
Explore Other Quizzes by Yankeegirl742