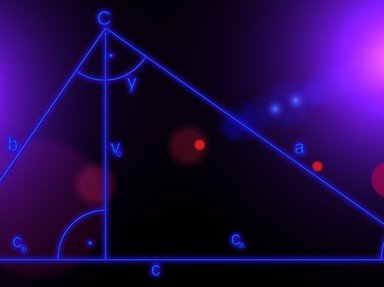 There are many ways of finding out the size of angles within circles. How good are you at geometry? Enjoy!

Quiz Answer Key and Fun Facts
1. One of the easiest circle theorems to remember is to do with angles in a semi-circle. If two straight lines are drawn from either end of the diameter of a circle and meet at a point on the circumference, what will the angle always be?

Angles are equal when subtended by the same arc (a=b etc).

This situation also leads to the two lines, the tangent and the radius, meeting at right angles to one another. Another way to describe this would be that the tangent is perpendicular to the radius of the circle.
5. Two points are marked on the circumference of a circle. A straight line is drawn from each of these points which both meet in the exact centre of the circle. Another straight line is drawn from each point and meet at a certain point on the circumference. How much bigger is the angle formed at the centre compared to the angle formed at the circumference?

Opposite angles within a cyclic quadrilateral will always total 180 degrees. In total, angles in a quadrilateral tally to make 360 degrees. That is the proof of the rule. As there are always two sets of opposing angles in a quadrilateral, each must total 180 degrees and subsequently reach the full 360 degrees.
7. A point is marked outside the confines of the circle and from that two straight lines are drawn so that they touch the opposite sides of the circles. What does this tell us about the straight lines from the point of origin to the point of meeting the circumference?


Answer: They are equal in length

When this phenomenon occurs, the length of the two straight lines from the point of origin to the points on the circumference of the circle that they touch will be equidistant.
8. An important factor to take into consideration when attempting to find angles using circle theorems is the use of isosceles triangles. Which of the following statements is true of isosceles triangles?

The use of isosceles triangles when attempting to ascertain angles within a circle makes the process a whole lot easier. When one of the triangle's corners is situated directly on the circle's geometric centre, it is possible to know that two sides (the radii of the circle) will be equidistant. An isosceles triangle is indicated by a dash drawn over each of the two equal sides. Once the isosceles triangle is known, the missing angle can be established.

As the angle between the point at where the two equidistant lines meet is always the different sized angle, you know that the other two angles will be equal. If angle x = 50 degrees, angle y = 50 degrees. That will leave a final angle of 80 degrees, as angles in a triangle always amount to 180 degrees.
9. One significant rule regarding the attainment of angle sizes within a circle is the 'alternate _______ theorem'.

The alternate segment theory proposes that two angles in a certain structure will be equal to each other. Take angles (x) and (y). Angle (x) is situated between a chord (a line connecting two points of an arc) and a tangent. Angle (y) is situated between the meeting points of two straight lines which have been drawn from either end of the chord. This meeting point is on the circumference. 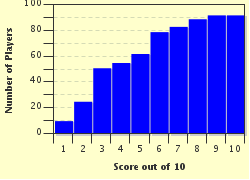 Related Quizzes
This quiz is part of series Jonno and His Mathematical Menagerie:

A collection of my maths quizzes, published at a time when I had not forgotten as much as I have now!