This is based on the five different kingdoms that all organisms are classified into.

Quiz Answer Key and Fun Facts
1. What is classification?


Answer: Grouping things together on the basis of the features they have in common

Classification is based after a careful study of all the main features of organisms. This could include features like body shapes, types of limbs and skeletons, internal organs, etc.
2. Which is the most commonly used classification scheme?

This scheme was put in use when it became very difficult to classify fungi, bacteria and single-celled organisms that did not fit in the plant or animal category.
3. Which of these is a kingdom?

Blue -green algae is an example of an organism found in kingdom Monera.
4. Coral belongs to which of these kingdoms in the most commonly used classification system?

Corals were often classed as plants until the nineteenth century, since they do not move around, as animals normally do. They are now classified as animals since they need to ingest food.
5. Which of these is not included in the fungi kingdom?

This includes mushrooms, toadstools, puffballs, bracket fungi and yeasts.
6. The kingdom plants is divided into flowering and non-flowering plants. What is a flowering plant where the seed is enclosed in a fruit called?

This consists of monocots and dicots.
7. Organisms are first divided into large groups called kingdoms. What are kingdoms sub-divided into?

Phylum is the singular form of phyla.
8. Then come classes. Are classes divided into orders?

A phylum is divided into classes that are further divided into orders.
9. Then we have three more levels of classification. In which order do they come, starting from broadest to most specific?

The binomial system was created by Carl Linnaeus who gave each organism a generic and specific name.
10. What would the order of a man be? 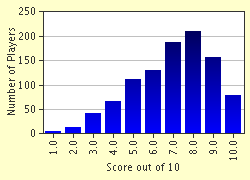 
Other Destinations
Explore Other Quizzes by litacanrena