Three clues are given for each constellation. All you have to do is match them up with the right one. Deep-sky objects are included!

Dorado, the "dolphinfish", is a southern constellation with many deep-sky objects. All three of the clues are associated with the Large Magellanic Cloud, which is a satellite galaxy of the Milky Way. In 2016, the Tarantula Nebula was known to be the largest region of star formation in the local group of galaxies, and one of the few that were capable of being seen outside the Milky Way. Supernova 1987A occurred on the outskirts of the Tarantula Nebula in 1987.

Despite being outside our galaxy, it was the brightest supernova seen in nearly 400 years.
2. The Jewel Box, the Coalsack, Acrux

Better known as the Southern Cross, Crux is one of the most famous constellations in the southern hemisphere. The Jewel Box is an open cluster of stars that resembles fancy jewelry. The Coalsack is an ominous dark nebula that obscures the stars behind it. Acrux, or Alpha Crucis, is a multiple star system that marks the bottom of the cross.

Carina has a large number of star clusters and nebulae because the Milky Way runs through it. Canopus is a supergiant that is the second brightest star in the sky, after Sirius. Mystic Mountain in the Carina Nebula is a striking cloud of dust containing many newborn stars that are firing off jets of gas.

The Bullet Cluster shows two colliding clusters of galaxies that are 4 billion light years away. Its gravitational lensing provides some of the best evidence for the existence of dark matter.
4. Lagoon Nebula, the Teapot, center of the Milky Way

Since the center of the Milky Way lies in Sagittarius, the constellation has a very active region of star clusters and nebulae. The famous Lagoon Nebula is a pink-hued emission nebula. Others worth noting are the bright Omega Nebula, and Trifid, which has a dust cloud resembling a unicorn.

The Teapot is an asterism in the constellation- a play on the Milky Way having the appearance of steam coming out of its top.
5. Betelgeuse, Rigel, Horsehead Nebula

Orion is one of the easiest constellations to find because it has two of the brightest stars in the sky: Betelgeuse and Rigel. Betelgeuse is a red supergiant that is expected to explode into a supernova sometime in the relatively near future. Rigel is a blue-white supergiant representing the foot of Orion.

The Horsehead Nebula is a dark nebula that creates the silhouette of, you guessed it, a horse's head.
6. Aldebaran, the Pleiades, Crab Nebula

Sometimes referred to as "the fiery eye of Taurus the bull", Aldebaran is an orange giant burning 65 million light years away. The Pleidaes are an open cluster of seven stars that are hot, blue, and extremely luminous. The Crab Nebula contains the remnants of a supernova that was first observed in 1054 A.D.

At its center, the Crab Pulsar is a neutron star that is only 30 km across, yet spins at a rate of 30 times per second and blasts out enormous amounts of radiation. It's probably the most terrifying thing in our little corner of space.
7. Deneb, Veil Nebula, X-1

Also known as the "Northern Cross", Cygnus contains Deneb, a blue-white supergiant that shines at the top of the cross. Due to the precession of the equinoxes, Deneb will replace Polaris as the pole star in about 8,000 years. The Vela Nebula contains the wispy remnants of a supernova that is thought to have exploded anywhere from 3000 BC to 6000 BC. Cygnus X-1 is part of a high-mass binary system that is generating enormous amounts of x-rays.

The system includes a blue supergiant whose mass is being sucked in by a neighboring black hole - as if the neutron star wasn't terrifying enough.
8. Vega, Ring Nebula, Double Double

Vega is the fifth brightest star in the sky and only 25 light years from Earth. The Ring Nebula is a planetary nebula that resulted when a red giant passed into the final stage of its life before becoming a white dwarf. Epsilon Lyrae, also known as the Double Double, is a star system that has a pair of binary stars that are revolving around each other. One pair is circling around the other pair, creating a center of gravity between four different stars.
9. Thuban, Cat's Eye Nebula, Tadpole Galaxy

Draco "the dragon" is a large northern constellation. Due to the precession of the equinoxes, Thuban was the pole star prior to Polaris being the current one. Cat's Eye Nebula is a young planetary nebula, owing its strange appearance to the gravity of a multiple star system at its center.

The cause for the Tadpole Galaxy's long trail of stellar material is thought to be from a near collision with another galaxy, not from a frog egg.
10. Alpheratz, Blue Snowball Nebula, closest spiral galaxy to the Milky Way

Famous for its galaxy of the same name, the Andromeda constellation covers a large portion of the northern sky. Alpheratz, its brightest star, is actually a binary system whose brighter star has a rare atmosphere composed of elements like mercury, manganese, and xenon, causing it to spin a lot slower than other stars.

The Blue Snowball Nebula is appropriately named for its color. Finally, not only is Andromeda the closest spiral galaxy, but it is the farthest thing in the universe that can be seen with the unaided eye.

In fact on a dark night with clear enough air, it would appear to occupy more space than the moon does.
Source: Author albert11 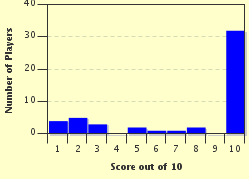 
Other Destinations
Explore Other Quizzes by albert11