Quiet As a Mouse Trivia Quiz

How much do you know about this common piece of computer hardware?

The term "mouse" was first used by the Stanford Research Institute to describe a computer tool. This term came from the fact that early mouse models had a cord (or tail) extending from the rear of the device. This suggested a mouse-like look.
2. The first mouse packaged with and intended for use with a computer came with what computer?

The Xerox Star 1981 was just one in a line of computers marketed by the 8010 Star Information System. Individual computers in this line usually sold for $16,000. Though only 25,000 unit were sold (the price was too high), many people today claim that the system was ingeniusly ahead of it's time.
3. Who invented the mouse?

Douglas Engelbart, who worked for the Stanford Research Institute, invented a basic computer mouse in 1964. It was a bulky device with two perpendicular wheels. Engelbart patented the device in 1970 (US Patent 3541541).
4. Bill English invented which type of mouse?

In 1972, Bill English invented the ball mouse while working for Xerox PARC. The external wheels of Engelbart's mouse were replaced with a single ball. Wheels inside sensed movement of the ball and relayed this information to the main computer.
5. Manufacturers have made mice with as many as five buttons. Which of the following is NOT usually a function of one of the buttons?


Answer: turning the computer on and off

Engelbart, the mouse's inventor, wanted a mouse to have as many buttons as possible. Though models have been made with up to five buttons, the typical model was chosen for its ease of use.
6. Which company introduced the first commercially available mouse with a scroll wheel (middle mouse "button")?

Mouse Systems introduced the scroll wheel in two commercially available products in 1995, though the model didn't become popular until Microsoft released a scroll-wheel mouse in '96.
7. How is mouse speed measured?

CPI (Counts per Inch) measures mouse speed, and is equatable to DPI (dots per inch), another less correct measurement. New software, however, can allow a mouse to move at a speed drastically above or below its original CPI.
8. What is the most common mouse accessory?

The most common mouse accessory, the mousepad, is typically used for mechanical mice only, because they require excess traction. Optical and laser mice, though they do not require a pad, are often used in conjunction with a pad to eliminate scratches on the desk surface, and when the surface is detrimental to the laser tracking.
9. Which of the following is NOT an alternative pointing device?

A gyroscopic mouse senses mouse movement as it moves through the air, making it a good choice for users who must operate the equipment standing up, or who have little room for a regular mouse.
A foot mouse is a suitable alternative for those who cannot, or wish not to, use their hands.
A camera mouse utilizes a camera to track a user's head movement and changes it to mouse movement on a computer screen.
10. Which of the following companies has become known for producing one-button mice? 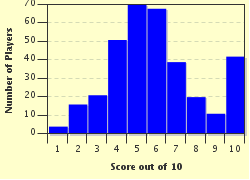 Related Quizzes
This quiz is part of series Be Quiet and Listen all Around Quizzyland:

One quiz from each category is featured. They all have a word dealing with quietness and listening in be title.


Other Destinations
Explore Other Quizzes by neelie_447