In 1985, a new form of carbon was discovered. Its structure was unlike any other molecule, and scientists soon realized the applications of the discovery. How much do you know about these newly-discovered carbon nanotubes, dubbed "fullerenes?"

Quiz Answer Key and Fun Facts
1. The fullerenes discovered in 1985 by Robert Curl, Harold Kroto, and Richard Smalley were composed only of the element carbon, but the arrangement of carbon-carbon bonds was something that had never before been seen. What name is given to this phenomenon, in which a single element can exist in several structural forms?

An allotrope of an element is a modification of the element's bonding structure. Allotropes of a single element may have different chemical formulas. For example, O2 (the oxygen that we breathe) and O3 (ozone) are chemical allotropes of oxygen. Allotropy shouldn't be confused with isometry, which is the modification of a compound's structure (for example, glucose and fructose have identical chemical formulas, but they differ in the placement of a single double bond on the molecule). To put it another way, allotropes are structural modifications of elements, while isomers are modifications of compounds.
2. Aside from amorphous carbon, carbon has three structural forms, including the recently-discovered carbon nanotubes. Which more common compounds represent the other two major structures of carbon?

Carbon is tetravalent, meaning that it forms four chemical bonds. That's why the field of organic chemistry is so large: carbon's interactions with other elements encompasses a wide variety of compounds.

However, when carbon is chemically bonded only to iself, in the form of its allotropes, there are only three major structures that it can take on. Diamond is formed when carbon bonds to form tetrahedra and hexagonal rings. The structure is very sturdy and stable, which is why diamond is so hard. In graphite, each carbon atom uses only three valence electrons, which forms a less sturdy arrangement. The result is a more brittle compound that can conduct electricity, because the loose valence electrons can carry current along the plane of the molecule.
3. The scientists that made the discovery in 1985 called the carbon tubes that they discovered "fullerenes," an eponym derived from Richard Buckminster Fuller. In what non-chemistry-related field did Fuller make a name for himself?

Some of the earliest fullerenes to be discovered weren't rod-shaped, and instead were 32-sided structures in the shape of geodesic domes. Fuller was a contemporary architect most famous for his work in constructing the futuristic, many-sided domes, and the scientists named their discovery in his honor. Some of his most famous works include the Montreal Biosphere and the famous golf ball at Disneyworld's EPCOT Center, which houses the "Spaceship Earth" exhibit.

Today, the roughly spherical fullerenes are called "buckminsterfullerenes", often shortened to "buckyballs." Buckyballs are made up of twenty hexagonal faces and twelve pentagonal faces, specifically forming a "truncated icosahedron." It's essentially the same shape as a soccer ball. Cylindrical fullerenes, also known as carbon nanotubes, are (somewhat less commonly) called buckytubes. Buckytubes are made up only of hexagons, but their chemical properties are somewhat similar to buckyballs'.
4. The first fullerenes to be discovered were found inside of the laboratory, but they exist in trace amounts in nature as well. Where might you find buckyballs in your house?


Answer: In your fireplace

Fullerenes (specifically buckyballs, which are the most common type of fullerene) can be found in small quantities in soot, which essentially is an impure form of carbon formed from the burning of a hydrocarbon fuel. In addition to the most common (C60) form of fullerenes, one can find C70, C76, and C84 molecules in nature (Note: C60 simply means that there are 60 carbon atoms in one molecule. C84 has 84 carbon atoms). Fullerenes are also created in small amounts during lightning strikes in the atmosphere.

They also may be found naturally in a group of Russian minerals.
5. C60 molecules are very stable. Which of the following best describes their reactivity and solubility?


Answer: Strongly inert and insoluble in most compounds

There is an entire branch of organic chemistry devoted to fullerenes, which as the title of this quiz pointed out, are very unreactive and are infuriatingly difficult to dissolve in solution. Buckytubes are even more difficult to work with because, unlike other fullerenes, they cluster together and are hard to separate physically. Scientists study fullerenes and try to overcome their chemical properties because the molecules' physical and chemical properties make them ideal for several scientific applications.
6. One very cool property of fullerenes, specifically buckminsterfullerenes, is that they aren't always hollow. In 2001, scientists who found noble gases trapped inside buckyballs were able to make which conclusion surrounding the Earth's past?


Answer: A meteor or comet was responsible for the greatest mass extinction in the fossil record.

The Permian-Triassic extinction isn't as well-known as the K-T extinction, which killed off the dinosaurs, but it was much more dramatic. Also known as the "Great Dying," it was responsible for the annihilation of 96% of marine and 70% of terrestrial species on Earth. Occurring more than 250 million years ago, it was the greatest destruction of life on the planet ever. Reasons for the mass dying are disputed, but scientists now believe that fullerenes hold evidence for the cause. Samples of neon and argon that have endured inside the hollow shell of buckyballs now reveal that a collision with an extraterrestrial object (comet or meteor, most likely) was the reason for such a high death toll.
7. In 1991, scientists showed that fullerenes behave strangely at 18 Kelvin. Which behavior, which other compounds require lower temperatures in order to exhibit, do they show?

At normal pressure, C60 with rubidium and cesium can achieve superconductivity at 33K.

These properties encourage scientists to pursue fullerenes as potentials in the field of nanotechnology.
8. A hypothesized use for carbon nanotubes is to surround them with cellulose paper so that they act as electrodes and conduct electricity. For what could the cellulose/fullerene combination be used?

The so-called "paper battery" was theorized by a group at the Rensselaer Polytechnic Institute in 2007. A liquidized salt is used as an electrolyte so that the battery can function at temperatures between -100 to 400 degrees Fahrenheit (-73 and 149 degrees Celsius).

In addition, electrolytes found in the human body, like blood and sweat, can be used to activate the device. In this way, scientists hope that paper batteries could power pacemakers or other implants biochemical devices. Although the batteries are safe and biodegradable, their inherent cost due to the relative scarcity of nanotubes makes them commercially impractical until a new source for the fullerenes can be found.
9. Carbon nanotubes might be used to create strong and thin cables necessary for the development of a technology found most often in science fiction. What could they be used for?

The idea of an elevator into space dates back to the 1895 musings of Russian Konstantin Tsiolkovsky. Mostly limited by funds and the enormous amount of materials needed, plans for the space elevator were encouraged by the discovery of unreactive, strong carbon nanotubes, whose large tensile strength would be ideal for the cables necessary to construct the elevator.

In 2008, a Japanese book written by Dr. Brad Edwards and Philip Ragan influenced Japan to announce its intent to build the elevator for the price of one trillion yen.

Although the science was sound before 2008, the cost to construct an elevator was far too macroscopic for large projects to begin.
10. Buckyballs act as effective industrial lubricants. They are useful for catalyzing chemical reactions. They even absorb free radicals in the brain, effective for preventing neuron damage after a stroke. However, perhaps the most surprising application is the use of fullerenes in which everyday business item?

Xerox filed a patent in the United States for the use of buckyballs as photocopier toner. Much smaller than regular copier toner, they improve resolution strongly.

Nanotubes are also used in microscopes, circuitry, and a plethora of other technologies. Since their discovery in 1985, they have become an important tool in scientific research and in new technologies.
Source: Author adams627 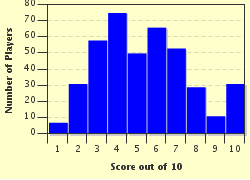 Related Quizzes
This quiz is part of series Commission #8:

To you, the player. Yours truly... our authors, who joined this eighth Commission in March 2010 to bring a series of quizzes with a certain theme to their titles.


Other Destinations
Explore Other Quizzes by adams627