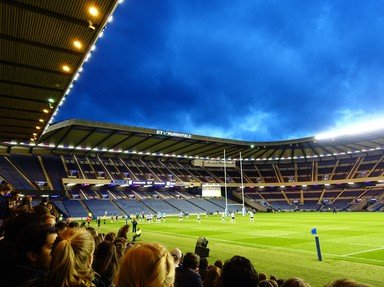 Do you know the name of each teams home stadium? We are looking for the name of the ground that each team called home.

Quiz Answer Key and Fun Facts
1. What is the home ground of Chelsea?

While most football clubs are founded first, and then seek out a ground, Chelsea was founded for Stamford Bridge. Stamford Bridge was built in 1877 as an athletic ground, not a football stadium. It was acquired by Gus and JT Mears in 1904, who offered it to Fulham Football Club, who turned it down.

The Mears brothers founded Chelsea in 1905, and chose blue since it was the racing color of Lord Chelsea. Glasgow Rangers play at Ibrox, and Portman Road is the ground for Ipswich.
2. What is the home ground of Manchester United?

Opened in 1910, Old Trafford, given the nickname "The Theatre of Dreams" by Bobby Charlton, is probably the most famous Premier League Stadium. American Malcolm Glazer bought Man United in 2005, but contrary to fans fears, he did not rename the team or the stadium. The Oval is a cricket ground.
3. Where do Liverpool play their home games?

Anfield was originally Everton's football ground, but a dispute over rent in 1894 saw Everton move to Goodison Park. John Houlding, the owner of Anfield, decided to form his own football club, which he named Liverpool F.C. Merseyside is a former Metropolitan County, of which Liverpool was a member.

In 2004 Liverpool City Council gave the club permission to build a new stadium at nearby Stanley Park, but when Liverpool refused to share the stadium with rival Everton, financing fell through.
4. Where did Tottenham Hotspur play their home games for 118 years?

Members of a local grammar school and Hotspur Cricket Club founded Tottenham Hotspur in 1882. In 1888 they moved to Northumberland Park so that they could charge admission. They made their move to White Hart Lane in 1899, which happens to be bordered by Paxton Road. The stadium was demolished in 2017.
5. What was the home ground of Arsenal, before they moved to a new home ground in 2006?

When workers at the Royal Arsenal in Woolwich founded the team in 1886, they played their games in nearby Plumstead Common. Financial troubles led to a move in 1913 to North London, The official name of the stadium was Arsenal Stadium, but it had come to be known as Highbury because of its location. Arsenal moved to the Emirates Stadium at the start of the 2007-08 season.
6. What was the home ground of West Ham United from 1904 to 2016?

Founded in 1895, the Hammers moved to the Memorial Ground in Plaistow in 1900. In 1904, they rented ground from the London District of Upton Park and moved again. The area was called Boleyn Castle because of an association with Anne Boleyn, who supposedly owned the house on the ground.

Although it is commonly referred to as Upton Park, the official name of the ground is Boleyn Ground. West Ham moved to the London Stadium (the main stadium used for the 2012 London Olympic Games) in 2016.
7. Which home ground did Bolton Wanderers move to in 1997?

Originally named Christ Church FC, Bolton Wanderers were formed in 1874, and were one of the founding members of the Football League. In 1895, they moved into Burnden Park, where they played for the next 102 years. In 1997, Bolton moved to the Reebok Stadium, named after their longtime sponsor. Selhurst Park is the ground of Crystal Palace.
8. Where did Wigan Athletic move their home ground to in 1999?

Wigan Athletic, "The Latics", were formed in 1932, as the fifth attempt to establish a football team in the rugby town of Wigan. They purchased Springfield Park from the previous football failure, and played their games there until 1999. In 1995 Wigan was purchased by David Whelan, owner of JJB Sports, who, as part of his plan to take the team to the Premiership, built the JJB Stadium in 1999. Carrow Road is the home ground of Norwich City.
9. Manchester City moved to a new home ground in 2002. Which one is it?

Founded in 1880 as West Gorton, then changed to Ardwick A.F.C. in 1887, they finally changed their name to Manchester City in 1894 when they moved into Hyde Road. Manchestewr City moved to Maine Road, which was built to emulate Hampden Park, the Scottish National Stadium, in 1923, where they played for the next 80 years. Following the Commonwealth Games in 2002, Man City signed a 250-year lease for the new City of Manchester Stadium.
10. What is the home ground of Blackburn Rovers?

The St. Domingo Methodist Church in the District of Everton founded St. Domingo F.C. in 1878. In 1879, when many people outside of the parish were interested in playing, the name was changed to Everton F.C. They first played in the Stanley Park area, before moving to land donated on Priory Road in 1882. Beginning in 1884 until a rent dispute ended the contract in 1892, Everton played their matches at Anfield, now the home of Liverpool. Everton moved into Goodison Park in 1892, and although there were talks about building a joint stadium with Liverpool in the Stanley Park area, the two rivals could not come to an agreement, and the idea was abandoned.
12. Where do Charlton Athletic play their home games?

Founded in 1905 as a boys club, Charlton Athletic have played at The Valley, except for the years between 1985 and 1991, when they played at Crystal Palace's Selhurst Park, and from 1991 to 1992, when they played at West Ham United's Upton Park. Craven Cottage is the home ground of Fulham.
13. Where do Fulham play their home games?

Fulham St. Andrew's Church Sunday School F.C. came into existence in 1879, and played their matches at Star Road. They shortened their name to just Fulham in 1888, and moved into Craven Cottage in 1896, and stayed their until a two year ground share with Queens Park Rangers at Loftus Road in 2002 - 2004, while Craven Cottage was renovated. The Valley is home to Charlton Athletic.
14. Where do Newcastle United play their home games?

Newcastle United formed in 1892, after Newcastle West End F.C folded, and most of the players and staff went over to Newcastle East End. West End had been playing in St. James' Park, while East End had been playing on their cricket ground in South Byker. East End took over the lease on the stadium, and Newcastle has played there ever since. Elland Road is the home of Leeds United.
15. What is the home ground of Aston Villa?

Members of the Villa Cross Wesleyan Chapel founded Aston Villa in 1874 as a way for members of the cricket team to keep in shape during the winter months. They first played in Aston Park from 1874 to 1876, and at Perry Barr from 1876-1897. In 1897 they moved into Aston Lower Grounds, and Athletic Stadium that was eventually dedicated solely to football, and renamed Villa Park.
16. Where did Middlesbrough move their home ground to in 1995?

Once again it was a cricket club looking to stay in shape during the winter who founded Middlesbrough F.C. in 1876. They turned professional in 1889, returned to amateur status in 1892, and became professional for good in 1899. They first played in Linthorpe Park until 1903, when they moved into Ayresome Park.

One of the charter members of the Football League, they were founded as the West Bromwich Strollers (because they had to walk to Wednesday to purchase a football) in 1878, they changed their name to Albion in 1880, and also moved from their original ground at Coopers Hill to Four Acres. In 1895 they moved to Stoney Lane, before finally settling into The Hawthorns in 1900.
18. Where is the home ground of Birmingham City?

Originally founded as the Small Heath Alliance in 1877, they played the first two years at Arthur Street before moving to Muntz Street. In 1905, as they prepared to move to the St. Andrews, they changed their name to Birmingham, adding the City in 1945.
19. Where do Portsmouth play their home games?

Portsmouth was formed in 1898, and has called Fratton Park their home ground for their entire history. Pompey, as Portsmouth is known, are rivals with Southampton, who play their games at Saint Mary's Stadium. Hillsborough Stadium belongs to Sheffield Wednesday.
20. Where did Sunderland move to in 1997?

Formed as the Sunderland and District Teachers Association in 1879, they played their first games in Blue Ho. Field. After a few years they began to recruit non-teachers and changed their name to Sunderland, as well as moving into Newcastle Road in 1868.

This is slightly ironic since their main rival is Newcastle United. In 1898 they moved into Roker Park, where they stayed until they moved into the Stadium of Light in 1997.
Source: Author arsenalvcc 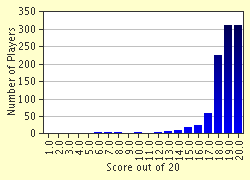 
Other Destinations
Explore Other Quizzes by arsenalvcc