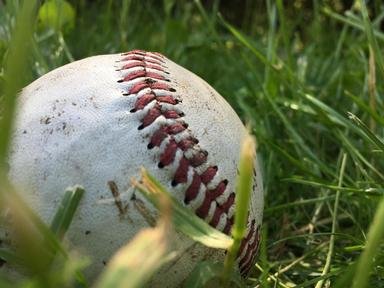 All multiple choice for the baseball dummies like me. Can you do better than my four? I hope you can. :)

Quiz Answer Key and Fun Facts
1. Which American League team in 1996 set a Major League record by seeing their batters hit by a pitch 92 times in the season?

The others were all NL teams. The Blue Jays line-up was more than bruised in the season. Catcher Charlie O'Brien led the team by being hit 17 times, Ed Sprague with 12, and John Olerud was hit 10 times. The Blue Jays pitching didn't retaliate much, and hit only 36 opposing batters in the season.
2. Which Hall of Fame player was known as "Mr. October"?

Reggie was given the nickname due to his focus around playoff time. He hit 18 postseason home runs including 10 in the World Series. Jackson hit five in the 1977 World Series while with the Yankees against the Dodgers, including three in the game six clincher. Reggie was inducted into the Hall of Fame all by himself in 1993. He wouldn't have wanted it any other way.
3. You might have to be a doctor to recognize Amyotrophic Lateral Sclerosis (ALS), but a baseball fan might also when it concerns which New York Yankee who died of this disease in 1941, which was later named after him?

Gehrig played his entire career with the Yankees from 1923-1939, stepping down from the game and stopping his 2130-game consecutive playing streak. He died just two years later, 17 days shy of his 38th birthday.
4. Which National League team in 2007 became the first franchise in baseball history to lose its 10,000th game?

The Philadelphia franchise began in the National League in 1883. During the 20th century, the team lost 100+ games in a season 14 times. The 21st century was a turnaround for the team, winning the NL East in every season from 2007-2010. The first franchise to win 10,000 games in baseball history was the New York/San Francisco Giants in 2006. Four seasons later, the Yankee franchise closed out the 2010 season with 9670 wins.
5. Babe Ruth set a Major League record by having 71 multiple home run games (more than one home run in a game). How many of these multiple home run games did he hit with the Detroit Tigers?

The Babe never played for the Tigers. His career began in 1914 with the Boston Red Sox. From there it was on to the Yankees where he hit most of his 714 career home runs. He had 67 multiple home run games with the Yankees, and three with the Red Sox.

His final six home runs came in his final season as a Boston Brave in 1935. On May 25, 1935, the Babe's final multiple home run game came against the Pittsburgh Pirates, when he went 4-for-4, hitting three home runs and had six RBIs. Ruth died in 1948 of cancer.
6. Jackie Robinson is most noted for being the first African-American to play in modern-day Major League Baseball. Which team signed him to play in 1947?

Under much controversy, Branch Rickey signed Jackie to play for the Dodgers. Robinson went 0-for-20 in his first 20 at-bats which didn't help matters. He would rebound and finish the season batting .297 with 175 hits and win the Rookie of the Year Award.

He won the National League MVP Award in 1949. Jackie went to six World Series with the Dodgers, and won his only crown in 1955. All the series losses were at the hands of the New York Yankees. He retired in 1956, was inducted into the Hall of Fame in 1962, then died 10 years later.
7. Which American League team went crazy in a 1966 game, hitting an amazing five home runs in just one inning?

The Twins went up against the Kansas City Athletics on June 9th, hitting five big ones in the seventh inning, and winning the game 9-4. The Twins' bats that hit them were Rich Rollins, Zoilo Versalles, Tony Oliva, Don Mincher, and Harmon Killebrew.
The Twins also tied a home run record in 1964, when they hit four home runs in four consecutive at-bats in one inning against those same Athletics. Oliva and Killebrew had a hand in that also.
8. Some dummies like me might know that pitcher Bert Blyleven set a season record by allowing 50 home runs in a season in 1986 with the Twins. Some might also know that pitcher Jamie Moyer allowed his 511th career home run in 2010. Which American League pitcher set a league record by giving up 422 home runs in his career?

Frank threw for 20 seasons in the American League, and one in the National with the New York Mets in 1993. His 422 American League presents were via the Tigers with 182, the Angels with 146, 75 with the Rangers, 17 with the Red Sox, and two with the Yankees. His only Mets season saw him give up 26. Tanana retired after giving up 448 overall.
The American League record for giving up the most home runs in a game with six was set by Tommy Thomas of the Browns in 1936, and later tied by Tim Wakefield of the Red Sox in 2004.
9. This Chicago Cub slugger hit 50+ home runs in four consecutive seasons, the first in history to do this. In 1998, when Mark McGwire hit a record 70 home runs for the Cardinals, this Cub slugger's 66 was enough to win the MVP Award. Who is this outfielder that wore the number 21?

He came close to extending his own record by hitting 49 in 2002. He eventually retired with 609 career home runs in 2007.
10. Which 2010 team won their first World Series since moving to the state of California?

The New York Giants won the World Series in 1954. The Dodgers and Giants moved out to the West Coast in 1958 after both playing in New York for almost 75 years. In San Francisco, the Giants went to the World Series in 1962, 1989, and 2002 but lost them all. The taste of California victory finally came in 2010 against the Texas Rangers in a four games to one win.
Source: Author Nightmare 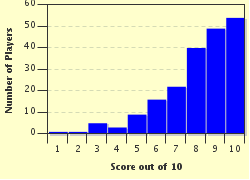