Red Rum is the greatest steeplechaser who ever lived. He won the Grand National three times after overcoming a career-threatning disease. His life is a story of determination and courage, and here it is, in 10 questions.

Share on Facebook
Share on Twitter
Share by E-Mail
Author
horselover-xx
Time
3 mins
Type
Multiple Choice
Quiz #
257,936
Updated
Dec 03 21
# Qns
10
Difficulty
Average
Avg Score
7 / 10
Plays
977
Awards
Top 35% Quiz
This quiz has 2 formats: you can play it as a or as shown below.
Scroll down to the bottom for the answer key.

Quiz Answer Key and Fun Facts
1. When and where was Red Rum born?

Red Rum was born on May 3rd 1965 at Rossenara Stud, a stud farm in County Kilkenny, Ireland. He was bred to be a sprinter.
2. What colour was Red Rum?

Bay is brown with a black mane and tail.
3. When Red Rum lost his first race, a 5 furlong claiming race, what year was it?

The people who claimed Red Rum sold him in 1972 to Noel LeMare because his condition began going downhill.
4. After Noel LeMare bought Red Rum, the colt was diagnosed with what foot condition?

Red Rum was diagnosed with Pedal-Osteitis in his off-fore (front right leg) in 1972, two days after he was sold. Nobody thought he would be worth anything anymore.
5. How did trainer Ginger McCain make Red Rum fit to race again?


Answer: By excercising him on the sea shore instead of the track

Ginger had seen many broken-down carthorses reconditioned by being galloped on the sea shore and thought it would work for Red Rum, too. It did.
6. When did Red Rum first race in the Grand National, and what place did he come in?

Red Rum came up lame in 1978, the day before the Grand National, which he was entered in for the 6th time. Ginger McCain decided to retire him.
8. Red Rum was retired from riding completely at age 20. What year was it?

Red Rum was completely retired from being ridden because of a blocked artery in his hind leg.
9. Red Rum died of a stroke when he was 30. What year was it?


Answer: At the finishing post at Aintree Race Track

This quiz was reviewed by FunTrivia editor Nightmare before going online.
Any errors found in FunTrivia content are routinely corrected through our feedback system.
Most Recent Scores
Nov 27 2022 : Guest 213: 10/10
Nov 25 2022 : Guest 94: 5/10 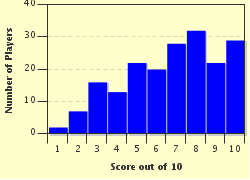 
Other Destinations
Explore Other Quizzes by horselover-xx