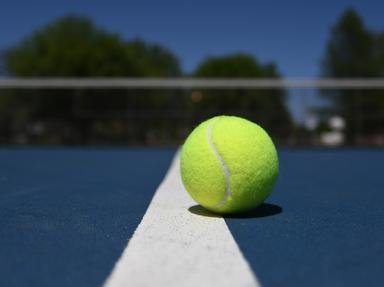 Historically, tennis was only played by princes and princesses. Nowadays it is an entertaining sport that can be played and enjoyed by everyone. How well do you know tennis? Enjoy!

Quiz Answer Key and Fun Facts
1. Basically, a tennis racket is made up of three main components, the grip, shaft, and head. The strings or guts of the racket is made of either natural or synthetic materials. What animals' intestines are used to make natural guts?

Cow and sheep intestines contain a type of chemical substance known as collagen, which has good elasticity property. On the other hand, synthetic guts are made of artificial materials, such as nylon, kevlar, and polyester.
2. There are two types of tennis balls, namely pressurized and non-pressurized. Pressurized tennis balls have hollow cores that are filled with what gas?

A tennis ball is normally yellow in color. Pressurized tennis balls are filled with inert nitrogen gas in their cores. The gas used must be inactive or inert. Hydrogen is highly inflammable.
3. Generally, there are three types of tennis courts. They are clay courts, natural grass courts, and hard courts (includes synthetic grass courts). How do you describe the bounce of a tennis ball on a hard court?

Out of the four Grand Slam events in the world of tennis, Wimbledon is played on natural grass court. Meanwhile, the French Open is played on clay courts. On the other hand, both U.S. Open and Australian Open are played on hard courts. Hard courts give a high and consistent bounce. Clay courts will absorb the pace of tennis balls, hence the bounce will be low and inconsistent.
4. Which of the following is not the name of lines found on a tennis court?

The center line divides the two service areas equally into advantage court on the left hand side, and deuce court on the right hand side.
When a ball is served, it should land within the opponent's service area, namely the area that is enclosed by the net, the singles side line (or doubles side line), the center line, and the service line. When you serve a ball, you should stand behind the baseline.
5. The four Grand Slam tournaments in the world of tennis refer to the Australian Open, the French Open, Wimbledon, and the U.S. Open. Which of these four tournaments has the longest history?

Wimbledon was first held in 1877, thus making it the oldest tournament. On the other hand, the U.S. Open, the French Open, and the Australian Open were first held in 1881, 1891, and 1905, respectively.
The Australian Open is held at Melbourne Park in January. The French Open is held at the Stade Rolland Garros in late May to early June. Wimbledon is held in late June to early July at Wimbledon, a suburb of London. The U.S. Open is held somewhere around August and September at the USTA Billie Jean King National Tennis Center in Queens, New York.
6. Which of the following statements is not true about the scoring in tennis?


Answer: The points for a tie-break game are counted the same way as in a normal game


Answer: Calls out the score

Apart from calling out the score, a chair umpire also needs to fill in the scorecard for a tennis match. They can also penalize players for unappropriated misconducts.
A net umpire holds the net when the server serves the ball to the opponent's side. If the ball touches the net and falls inside the opponent's service area (or service box), then they will call out "let", and the serve will be replayed. Usually there are two net umpires in a tennis match.
There are three to nine line umpires in a tennis match, but in some tennis courts, the high-tech electronics devices take over the roles of the line umpires. Their main job is to signal whether a ball is "good" (also known as "safe") or "out".
Ball boys and ball girls are not the officials in a tennis match. Nonetheless, their job is to collect or pick up the tennis balls that are scattered around the court.
A referee or a tournament director can usually be seen walking around from court to court with a walkie-talkie. Their decision will be final should there be any conflicts or arguments in a tennis match.
8. Player A leads player B in a set by 6-5. What would be the possible final scores for the set?

The score now is 6-5. If player A wins the next game, the score would be 7-5 and it is the end of the set. (Notice that in order to win a set without using the tie-break system, there should be a difference of 2 points)
However, if player B wins the next game, the score would be tied at 6-6. This is when they will play a tie-break game (a player needs to win a minimum 7 points and leads his or her opponents by 2 points). Whoever wins the tie-break game will win the set. So the final score for that set is 7-6.
9. Under which of the following situations, will the word "let" not be called?


Answer: When the server steps on the baseline when he or she serves the ball

In other words, "let" means "replay the point". When the server steps on the baseline when they serve the ball, it is a foot fault. If the ball served by the server touches the net and falls outside the opponent's service area, the net umpire will call out "let", which is followed by the line umpire calling "out".
10. During a rally, player A hits the ball before the ball bounces on the court. What is the tennis terminology used to describe this shot?

Usually, a player will volley in front of the net. Their opponent will have very limited time and slim chance to return the ball.
If player A serves the ball into player B's service area, and player B fails to touch the ball, it is called an ace.
Source: Author Matthew_07 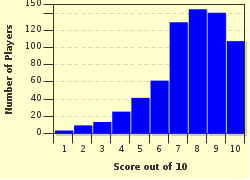 A collection of sports quizzes written by me, covering the sports of badminton and tennis, the Summer Olympics Games, and the FIFA World Cup.