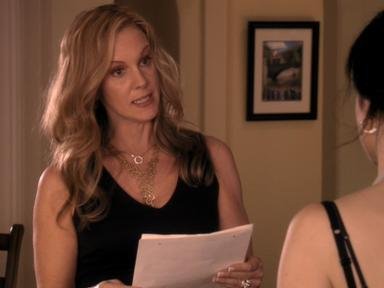 The next to last season two episode has things heating up with Peter, Nancy, Heylia, Conrad and U-turn. Original air date was October 23, 2006.

Quiz Answer Key and Fun Facts
1. What kind of fruit did Peter bring to Nancy?

Peter came by to bring her fruit on such a "hot day", and because he "felt bad about last night". While there, he asked her about the status of their relationship. She assured him all was well, but he knew she was lying, so he said goodbye.
2. Name Doug and Celia's rendezvous spot.

The Apache was a run down motel, obviously not located in the upscale community of Agrestic. It reminded me a little of the motel seen in season one of "Veronica Mars". While there, the cheaters discussed ending their perspective marriages.
3. Was it Doug that first broached the subject of he and Celia ending their marriages?

Doug (out of the blue): "Would you leave Dean?"
Celia responded with: "Would you leave Dana?"
Doug went on to explain that he and Dana were no longer intimate, whether or not that was totally true is unknown. Dana's been a mystery and never seen in seasons one or two.
4. After their discussion the value of the harvest, Nancy and Conrad left the grow house. Once outside, who attacked Conrad?

Peter had Conrad down on the ground with his gun drawn before they knew what hit them. He demanded the marriage certificate from Nancy, who lied and said she'd mailed it in to be filed. He changed his mind, not before using the worst racial slur, and decided that the profit from their harvest would be a good trade.
Conrad had just told Nancy that their harvest was worth $300,000.
5. Celia confessed her affair with Doug to Dean. She told Dean she wanted and divorce. Isabelle overheard all of this and said what?

They'd just decided they'd sit down together and tell her about the divorce when she called out from another room that she wanted to live with Dean. Celia told Dean that he was "so the kind of guy this stuff happens to". Dean couldn't believe Doug was her lover, since Doug hated her guts.

It was typical Celia to believe that Doug had fallen in love with her. Doug was an opportunist to the end, and Celia had it (to be used) coming.
6. Abumchuk was a bounty hunter after Kat.

Kat had misled Andy in the previous episode into believing Abumchuk was her jealous boyfriend from Alaska. As the episode neared its end, she confessed he was really a bounty hunter and that she'd committed a crime. The nature of that crime was revealed in the season two finale.
Robert "Bonecrusher" Mukes played Abumchuk. Robert's cited as being 6'10" and has guest starred on "Fastlane", "Las Vegas", and "CSI".
7. What was Heylia's job?

Nancy finally went to someone with experience for help. Heylia was sitting at an intersection, working as a crossing guard for children.
8. While visiting Arem Kashishian (Armenian drug lord) in jail, how did Heylia describe herself?

Heylia visited Kashishian to try and repair Nancy and Conrad's damage. We would not find out until the next episode the exact nature of their conversation, but she introduced herself to him as a business woman who wanted the same thing he did.
9. Which sport did Conrad play with U-turn while making a drug deal?

Conrad wanted to sell 38 pounds of weed to U-turn for $300,000. U-turn agreed to the deal, but told Marvin he planned to steal the weed instead of pay for it. While the duo played basketball, Nancy and Marvin discussed Marvin's scandalous love life.
10. Who turned out to be the culprit behind the theft of Agrestic's cameras and signs?

Though it did seem like a very Sanjay thing to do, it was Silas' room found full of cameras and "Drug Free Zone" signs. Nancy found these after she hatcheted her way into his locked room. She'd suggested that relocation may be their next move, which really made Silas angry.

Moving had first been Conrad's idea to Nancy, after the two had finally given into their sexual tension and kissed.
Source: Author Gamemaster1967


Other Destinations
Explore Other Quizzes by Gamemaster1967