There have been many cats featured on television shows over the years, not all of them your common domestic pet. How many of these do you remember?

Quiz Answer Key and Fun Facts
1. Not all featured television cats got to have instantly memorable names. What name was used for the girls' cat on the premier episode of "The Brady Bunch", the cat held by a shell-shocked soldier in an episode of "MASH", and Angelica's cat on "Rugrats" and "All Grown Up"?

Fluffy was also the name of an unseen cat that Sheriff Andy Taylor rescued from a rooftop on "The Andy Griffith Show". None of these brief appearances led to lasting roles, but they each had their 15 minutes of fame.
2. One of the characters on the British comedy "Are You Being Served" had a pet cat named Tiddles that was the source of constant innuendo, as was typical of this show. Which character was always talking about her pussy?

Mrs. Slocombe, played by Molly Sugden, was in charge of the women's department of Grace Brothers department store, with the attractive Miss Shirley Brahms as her assistant. There was no Miss Grace, the store was owned by the ancient 'Young Mr Grace'; Mrs. Humphries was the mother of Mr. Humphries, referred to a number of times but never seen.

When Tiddles, Mrs. Slocombe's cat, was brought to the store, we only saw its tail through the door of the cat carrier. While its appearances were minimal, its existence was constantly brought to our attention with lines such as "Animals are very psychic; the least sign of danger and my pussy's hair stands on end".
3. 'Lucky' Tanner appeared, or was mentioned, in most episodes of the sitcom which featured him. What did ALF usually want to do with Lucky?

ALF, so called because he was an Alien Life Form who crash landed in the Tanners' garage, came from the planet Melmac where cats were considered a delicacy. However, when Lucky eventually died near the end of the series, Alf discovered that he had become "that worst kind of Melmacian, a cat-lover".
4. Which of the following was NOT one of the Simpson family's pet cats?

Scratchy was the cartoon cat on the show-within-a-show "The Itchy & Scratchy Show". Lisa had a number of cats, mostly in the memorable episode "I (Annoyed Grunt)-Bot", where they dropped like flies! The original Snowball died before the start of the series, but has been seen in flashback; Snowball II was the family pet from the start of the series until her death at the start of "I (Annoyed Grunt)-Bot"; she was quickly followed by Snowball III, Coltrane (aka Snowball IV) and Snowball V, renamed Snowball II 'to avoid confusion'.
5. The members of "The Addams Family" had an unusual feline pet. What kind of cat was their pet, Kitty Cat?

The family saw nothing unusual about having a lion roaming their house. Then again, that was only one of their unusual pets. The son Pugsley had an octopus called Aristotle; the daughter Wednesday had a large collection of spiders of which one is mentioned by name - Homer.

The family also had a pair of piranha named Tristan and Isolde and a vulture named Zelda, and Morticia kept an African Strangler, a man-eating plant, named Cleopatra.
6. Fred Flintstone also had an uncommon feline for a pet, who was regularly seen on "The Flintstones". What was the name of the family's pet saber-tooth tiger, who locked Fred out of the house every week?

Baby Puss belonged to Fred and Wilma Flintstone, but didn't feature in many storylines, despite being seen in the closing credits of every show. Dino was their pet dinosaur, Pebbles their daughter, and Bam Bam the son of their neighbors, Betty and Barney Rubble.
7. A talking cat is far from routine! What was the name of the talking black cat from the television series "Sabrina, the Teenage Witch"?

Salem Saberhagen was a warlock who had been turned into a cat as punishment for trying to take over the world. He was cared for by Hilda and Zelda, the aunts with whom Sabrina lived. Bootsie was the pet of Mayor Adam West on "Family Guy", Olivia belonged to Lilly Rush on "Cold Case", and Patches the zombie cat appeared on an episode of "Buffy the Vampire Slayer".
8. Not all television cats have been family pets. Which of the following was NOT a member of the band of alley cats that starred in the Hannah-Barbera animation "Top Cat"?

Sylvester was a Looney Tunes character, constantly trying to catch Tweety Bird the canary. Top Cat (his friends called him TC), Fancy-Fancy, Spook, Benny the Ball, The Brain, and Choo Choo were members of a New York City gang who regularly pitted their wits against the local policeman, Officer 'Charlie' Dibble, and his attempts to evict them from their alley.
9. On an international note, what Australian children's television show starred a mute, apparently genderless, cat?

From 1972 through 1992, the orange and anthropomorphic Fat Cat graced our screens wearing red braces, a blue bowtie and a green bowler hat. He was played by Ralf Hadzic. In 1992, the Australian Broadcasting Tribunal decided that the show was not sufficiently educational to qualify for the compulsory children's content that the network had to broadcast, and the show was canceled. Humphrey B. Bear and Bananas in Pajamas were other well-known Australian children's show characters. "Bambaloo" was a children's show with a number of anthropomorphic characters, but no cats.
10. Let us pay tribute to one of television's icons, Morris the Cat. For which brand of cat food is Morris the commercial mascot?

Morris the Cat is a large orange tabby tomcat, the advertising mascot (or 'spokespurrson') for 9Lives brand cat food, appearing on its packaging and in many of its television commercials. The part of Morris has been played on television by a number of cats over the years. All of them have been rescued cats, coming from an animal shelter or a cat rescue society. 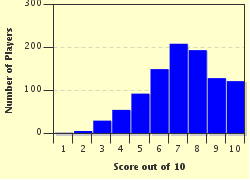 Yes, it's television to which Homer addressed this phrase of admiration, and on which you can see the subjects of these quizzes.


1. "We Can Be Heroes" - Phil Olivetti Average
2. Fifteen Minutes of Feline Fame Average
3. Everywhere a Woof! Woof! Average
4. This Television Quiz Has an Appendix Average
5. This Anatomy Quiz Has No Appendix Average
6. Genie in a Bottle Easier
7. The Last Picture Show Easier
8. All Will Be Revealed Average
9. Come on Down Easier
10. Step Up and Play Easier
11. 'Fawlty Towers' - Basil Average
12. Into Another World Average