Quiz Answer Key and Fun Facts
1. What was the name of the producer that worked on the Broadway musical that Holograms and the Misfits were going to audition for?

His name was Bob Merrit; it was written on his door at the beginning of the episode.
2. What was the name of the first song that the Misfit performed in this episode?


Answer: "Who Is She Anyway"

They were at the beach playing volleyball when Rio saw it in the newspaper and told Jerrica and the Holograms about the audition for the Broadway show. He said, "Jerrica, Kimber, everyone - your gonna be Broadway stars!"
4. How much money did Eric offer as a reward to anyone who could reveal Jem's real identity?

Eric and the Misfits come up with another scandal to cause promblems for Jem and the Holograms so that the Misfits could win the audition and perform in the Broadway show in New York City.
5. What caused the argument between Jerrica and Rio?

After Eric offered a reward to anyone who could reveal Jem's real identity, Rio became very curious about who really was Jem and he wanted to find out the truth for himself, not to collect on the money Eric was offering.
6. The Misfits wrote Jem a letter pretending to be Rio, but which Misfit actually wrote the letter?


Answer: The crown at the Statue of Liberty

The Misfit decided to have Jem meet Rio at the Statue of Liberty because they wanted to have her far enough away from the Broadway show that she wouldn't make it back in time.
8. What happened to Jem when she arrived at the meeting place where she was to meet Rio?


Answer: Pizzazz locked her in a room

Pizzazz was there waiting for her, and when everyone was loading the last boat for the night to go home, she locked her at the top of the Statue of Liberty room and made it back to the boat just in time and told the man in charge that no one else was up there.
9. Did Jem and the Holograms perform at the Broadway show as scheduled?

Jem made it back just in time to go on and perform as scheduled. She gave a performance they wouldn't forget for a long time. Everyone said they loved it!
10. Jem decided to have Eric, Pizzazz and the rest of the Misfits arrested for what they did to her.

After all the dirty tricks that Eric and the Misfits have pulled on Jem and the Holograms, they have never had them arrested. They've always handled them on their own.
11. When Jem finally made it back to the Broadway show what did she come back on?

Jem made her entrance at the Broadway show by flying in on a hang glider she borrowed from someone.
12. What did a person offer Jem if she wrote her full and real name on the check he had?

After Eric offered $100,000 to anyone who could find out Jem's real identity, everyone became crazy! A complete stranger found Jem at the Broadway show and offered her one zillion dollars if she wrote her full and real name on the check. Of course it was a trick to get Jem to put her real name on the check so he could cash-in on the reward money Eric offered, but she didn't fall for it.
13. At the end of the show when Rio and Jerrica were dancing and making up, what did Rio tell her?


Answer: That he didn't care who Jem was, it was Jerrica who really mattered

After the performance, they were celebrating with the producer, crew and friends. Rio told, "Jerrica I don't care about who Jem is, it's you who really matters, Jerrica!"
14. After the Misfits and Jem and the Holograms were done their auditions for the producer at the Broadway auditions, he said the same words to each band. What did he say to them both?


Answer: "You're perfect, wonderful, the best"

After each of the bands were done their audition he said to them both at different times, "Your Perfect, Wonderful, the Best!" But he didn't realize that he told both bands the same thing, so he had a problem on his hands. That's when he decided to announce the winner on the Lin-Z Pierce Show that same night.
15. Why did the producer decide to make the Misfits the understudies?


Answer: Pizzazz squirted him with water

Pizzazz got mad that they didn't win the main act at the Broadway musical and grabbed the water hose hanging on the wall and squirted everyone with it. The producer got intimidated and decided to make the Misfits the understudies.
Source: Author vannah1028

This quiz was reviewed by FunTrivia editor guitargoddess before going online.
Any errors found in FunTrivia content are routinely corrected through our feedback system.
Most Recent Scores
Jan 12 2023 : Guest 213: 15/15
Dec 26 2022 : Guest 75: 15/15 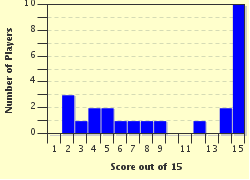 
Other Destinations
Explore Other Quizzes by vannah1028