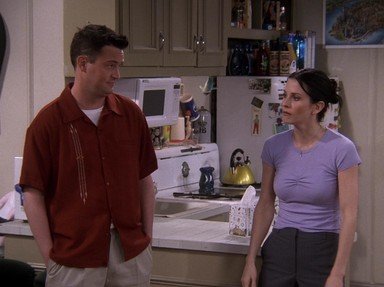 You Talkin' to Me? Trivia Quiz

This quiz is based on various quotes said throughout all of the 10 seasons. I give you the quote and who said it, you pick who they were saying it to. Good luck!

Quiz Answer Key and Fun Facts
1. Chandler says, "I can't believe you would actually say that. I would much rather be Mr. Peanut than Mr. Salty" to which of his friends?

Chandler says this in the first season of 'Friends', in the episode 'TOW the Evil Orthodontist'. In the beginning, we see everyone at Monica and Rachel's apartment. Chandler is the first one to speak with the line in question. Joey replies with, "No way! Mr. Salty is a sailor, all right, he's got to be, like, the toughest snack there is." Ross then says, "I don't know. You don't wanna mess with corn nuts.

They're crazy."
2. To whom does Phoebe say the following quote to, "This game is grotesque. Twenty armless guys joined at the waist by a steel bar, forced to play soccer forever. Ah, hello...human-rights violation"?

In the episode, 'TO Where Dr. Ramoray Dies', Chandler is trying to get Phoebe to play a game of foosball with him, but she refuses. She suggests that he play with his roommate, (Eddie), but Chandler tells her that Eddie isn't a big fan of foosball.
3. Ross says the following line to which of his friends, "It's a little early to be drinkin'"?

In the episode, 'TOW the Dollhouse', Joey has a crush on the girl who plays his love interest in a play. He finally takes her out and has a great time with her. The next morning, he enters Monica and Rachel's apartment, pauses, then gives Ross a hug, which makes Ross tell him, "It's a little early to be drinkin'."
4. Rachel said, "You don't tell a guy that you're looking for a serious relationship! You don't tell the guy that! Now you scared him away!" Which friend of hers did she say this to?

In the fourth season's episode, 'TOW the Girl from Poughkeepsie', Chandler showed his co-workers a picture of Rachel and they wanted to get a date with her. He first tells them she is only out for a fling, which makes her upset. So then he tells them she wants a relationship, which again upsets her and makes her say the quote in question.
5. "How many times have I told you guys, you never watch the cooking channel" is said by Chandler. The question is, which of the following choices did he say this to?

He actually says this to the chick and the duck. In 'TO Where Phoebe Hates PBS', Chandler comes home to find the chick and the duck in front of the television. Emeril's cooking show is on and we hear him say, "Now maybe you just like wanna put the whole duck in there! Who cares, y'know? Now I got the legs...". Chandler immediately runs over and shuts off the set and scolds them by saying, "How many times have I told you guys, you never watch the cooking channel!"
6. To whom does Ross say the following quote to, "Don't thank me! If you wanna thank something, thank the volcano that erupted thousands of years ago, killing but perfectly preserving an entire civilization"?

In the episode, 'TOW Ross' Denial', Rachel has to move since Chandler is moving in with Monica and she can't find a place to live. Ross tells her that a co-worker from the museum is going on a dig for 2 years and has a place he wants to sublet while he's away. Rachel gets excited and thanks him and Ross tells her, "Don't thank me! If you wanna thank something, thank the volcano that erupted thousands of years ago, killing but perfectly preserving an entire civilization."
7. "You know, I'm lookin' and I don't think anyone's home here. I say we just break the window, crawl through, and y'know explain later" is said by Ross. Which of the following people does he say it to?

In the 7th season's episode titled, 'TO Where They're Up All Night', Ross and Joey get stuck on the roof. They decide to climb down the fire escape. They get to a floor and Ross peeks in a window and says the line in question. He then knocks on the window and we hear a ferocious sounding dog start barking. Needless to say, that isn't how they get down to the ground.
8. Which of the following choices does Chandler say this to, "I'm not great at the advice, can I interest you in a sarcastic comment? Some cheese"?

In the episode, 'TOW the Tea Leaves', (8th season), Rachel thinks Joey's been avoiding her since he told her how he felt about her and she told him she didn't exactly feel the same way. Chandler tells her he knows it's tough now but it'll get better. She then asks him, " How do you know that? What if it just gets worse and worse and worse, to the point where we can't even be in the same room with each other?" He then tells her, ""I'm not great at the advice, can I interest you in a sarcastic comment? Some cheese?"
9. "Just give me a second to get all huffy and weird like you! Do you believe that who ever did something over here last night did what they did or didn't do? I mean come on!" This quote was said by Chandler to Monica.

In the ninth season's episode, 'TO Where Monica Sings', Ross is upset because he saw Rachel kissing a guy the night before on Monica and Chandler's balcony. Ross is talking to Chandler about it. Chandler says, "So you're moving on? Do you have any idea where you're moving?" Ross replies, "I don't know. I mean I have plenty of opportunity. Just now there were some women at the coffee house smiling at me. And then the other day on the subway a woman "accidentally" sat on my hand." Chandler then says, "Dude, don't rub my face in your crazy single life!" Ross then replies, "Well, and how about this? There is an anthropologist at school who totally came on to me during the inter-departmental Potluck dinner!" Chandler says, "Why did I get married!?"
10. Who does Phoebe say the following line to, "You know, once we're in the air and the captain turns off the seatbelt sign, you feel free to roam about my cabin"?

In the season premiere of the tenth season, the episode is titled, "TO After Joey and Rachel Kiss'. Everyone is on their way home from Barbados. Phoebe tries to give subtle hints to Mike about wanting to make out but he just doesn't catch on.
Source: Author NalaMarie 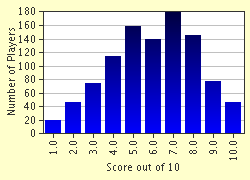