Arlington Cemetery holds a variety of monuments to America's war dead and is one of the most famous war cemeteries in the world.

Quiz Answer Key and Fun Facts
1. Arlington Cemetery lies in the former grounds of the estate of which famous general of the American Civil War?

General Robert E. Lee was the field commander of the Confederacy's Army of Northern Virgina from June 1862 until the end of the war. The land on which Arlington Cemetery was laid was confiscated from his family when he resigned from the Union Army in April 1861.
2. In what year was Arlington Cemetery established?

Arlington was one of several national war cemeteries established during the American Civil War. Most were laid on or near sites of battles where the soldiers had fallen, such as Gettysburg, Shiloh and Antietam.
3. The first soldier to be interred at Arlington was a general.

In perhaps a spirit of true democracy, the first soldier laid to rest at Arlington was of the lowest military rank. Private William Christman was the first to be buried there on June 15th, 1864.
4. By the end of the American Civil War, how many graves were in Arlington Cemetery?

Such a large number of war dead at just this one cemetery is testament to the appalling loss of life in what was regarded as the first modern war.
5. Arlington was dedicated originally as a war cemetery for the Union Army only.

Only Union Army dead were originally allowed to be buried at Arlington. The right of interment was finally extended to Confederate soldiers in 1912 out of a spirit of reconciliation.
6. In general, for the interment of which dead military personnel is Arlington Cemetery reserved?

Spouses and dependants can also be buried there. Any honourably discharged veteran and his or her dependants can have their cremated remains placed in Arlington's columbarium.
7. On November 11th, 1921, which famous person was interred at Arlington?

The clue was the date. Like many of the nations that suffered large losses during The First World War, the United States dedicated its own memorial in honour of the Unknown Soldier some three years after the conflict had ended. Representatives of unknown soldiers from subsequent conflicts are also interred there, at The Tomb of the Unknowns.

The national cemetery, which lies just outside Washington DC, over the Potomac River and next to the Pentagon, has come to symbolize national remembrance.
8. Which regiment of the US Army performs the function of The Honor Guard at Arlington?

The 3rd Infantry Regiment is commonly known as The Old Guard. It is the oldest unit in the entire US Army and has several ceremonial functions. Its detachments include the Continental Color Guard, the guards for the Tomb of The Unknowns, the US Army Drill Team, the mounted Caisson Platoon and the Presidential Salute Battery.

The 3rd Infantry oversees some 5,400 burials and cremations a year at Arlington.
9. What does The Netherlands Carillon, dedicated to the cemetery in 1960, commemorate?


Answer: The liberation of the Dutch people by US forces during WW2

The Netherlands Carillon, donated by the Dutch government, commemorates the important role that US forces played in the liberation of The Netherlands from German occupation during WW2. It is an open steel structure that is 120 feet (37 m.) tall and holds 49 bells.
10. Which crucial battle in WW2 is immortalized in a famous bronze statue of US Marines raising the flag on The Marine Corps Memorial?

The bronze cast was based on an iconic photograph taken by Joe Rosenthal as the battle neared its end on February 25th, 1945. The Marine Corps Memorial was dedicated by President Eisenhower in 1954 and the memorial took three years to complete.
Source: Author Plumbus 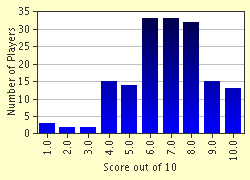 
Other Destinations
Explore Other Quizzes by Plumbus