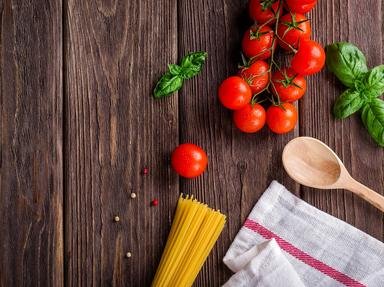 Or, "It says 'cards'." The incredibly casual Harry Vaderci was supposed to translate a book about leisure activities into Italian but he didn't change all the words. You have to finish translating the book by choosing the correct Italian word.

Quiz Answer Key and Fun Facts
1. Dice le "cards", that is, it says "cards". Help me by choosing the proper Italian word for "cards". Which of these is correct?

"Vela" is sailing, "cavallo" is horse and "nuoto" is swimming. You could play cards while sailing but you would have to play "Go Fish".
2. That incompetent Harry forgot to translate another word in my Italian language book on leisure activities. How should he have translated "theater"?

I'd like to send Harry to prigione for the poor job he did translating this book. "Prigione" is prison. "Rigattiere" is junkyard. "Stazione di servizio" is service station.
3. This time my translator left the words "board games" in English instead of translating them into Italian as he was supposed to. Perhaps I should have made it easier on him and called them "table games". How does an Italian say "table games"?

"Giochi "is Italian for games. "Rissa de coltello" is knife fight. I'd like to challenge Harry to a fight using my razor-sharp wits but he would be unarmed. "Gilcare di freccette" is a dart contest. "Tiri la mia barretta" means pull my finger which is about as far from a civilized board game as you can get.
4. Some people like to dance for recreation. Some people swing dance. Some people line dance. Some people even do ballet. Unfortunately Harry Vaderci was too lazy to translate the word "dance" in my Italian language book so you have to do it for me. Which of the following means "dancing"?

"Sbadiglio" means yawn. I saw you do that just now. This is only the fourth question. How can you be bored already? "Starnuto" is sneezing and "tossire" is coughing. My dancing resembles someone sneezing and coughing.
5. Everyone likes a nice walk. How would you say "walk" in Italian?

"Scricchiolare" means to creak. I suppose if you were an old Italian you would scricchiolare while you were camminato. "Conigliaro" is the name of a pair of baseball-playing brothers (Tony and Billy) from the 1960s and 1970s. Staying with the sports theme, Nick Buoniconti was a linebacker who played for Boston and Miami also in the 1960s and 1970s. I think any one of these three guys could have done a better job translating my book than Harry Vaderci.
6. For some people going shopping is a leisure activity. This holds true for Italian people, also, which is why I was chagrined (which is from the French word for "vexed") to see that "going shopping" was not translated in my Italian book of leisure activities. What is Italian for "going shopping"?

"Furto della banca" is kind of like shopping. It means "robbing a bank". "Fallire" could be the result of too much shopping. It means "go bankrupt". "Lotta libera" happens in stores the Friday after US Thanksgiving Day--all-in wrestling for the hottest items at discounted prices.
7. Fishing is another activity enjoyed by people around the world. How would you say "fishing" in Italian?

"L'aglio" means garlic--garlic hunting is not one of the most popular pasttimes. Besides, a garlic doesn't put up much of a fight when you catch it. "Caccia" (as is "I caccia the rabbit") is hunting. "Portare il bikini" means wear a bikini. If a woman goes fishing while wearing a bikini she would likely catch her limit of sharks, wolves and hound dogs.
8. One very healthy leisure activity is bike riding. You wouldn't know that if you were reading the book Harry Vaderci was supposed to be translating into Italian for me even though the Italian word for bicycle is very similar to the English word. That is because old Harry doesn't know how to say "bike riding" in Italian. Do you?

"Il tiro alla fune" is jumping rope, "il pattinaggio de ghiaccia" is ice skating and "scoppiate a ridere" means to burst out laughing. The fact that I paid Signor Vaderci to translate this book made him scoppiate a ridere.
9. Dice la "reading". Instead of "reading" what should it say in Italian?

"Cottura" is cooking. You could certainly read about cooking. "Litigare" is quarreling. I suppose people in book clubs sometimes quarrel about the book of the month. "Funzionare" is running. Reading while running is bad for your eyes.
10. I write quizzes for fun. Well, fun is not exactly the right word. The word I am actually looking for is torture. Be that as it may, there may be people somewhere who write quizzes for fun. How would you say "writing quizzes" in Italian?

"Gioco della chitarra" means playing the guitar, which I actually do enjoy doing. "Scuola di salto" means playing hooky from school, which I wouldn't know anything about. Besides, the statute of limitations has expired on anything I may or may not have done during my school years. "Andare a letto con tutti" means going to bed with Tutti--again something I wouldn't know anything about.
Source: Author deputygary 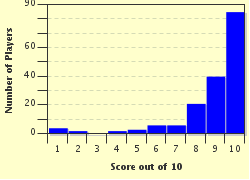 Related Quizzes
This quiz is part of series Commission #12:

If you change a couple of letters around in your quiz title, what do you get? You get this playful Commission from September 2010 in which our authors in the Author Lounge took some creative liberties, changing only two letters of their original titles, to make new quizzes.