There are many unusual cemeteries, mausoleums, and other burial places around the world. Here are ten of the more unique.

Quiz Answer Key and Fun Facts
1. What is unusual about the Saint Louis Cemetery, which is located in New Orleans, Louisiana?


Answer: All the graves are above-ground vaults

Constructed in the 18th century, the Saint Louis Cemetery is in fact three Roman Catholic cemeteries that contain only above-ground vaults. These very elaborate burial grounds are located close to the Mississippi River and are prone to flooding. These cemeteries are a popular tourist attraction in the city and contain wonderful examples of Gothic Revival architecture.

The above ground vaults were used because of flooding issues, but were also a pre-existing French and Spanish burial tradition.
2. Urbania's Church of the Dead has which of following macabre displays?


Answer: Mummies from its cemetery

This tiny Italian church is famous for its display of natural mummies from the church's outside cemetery. The "Cimitero delle mummie" contains eighteen mummies that were put on display in 1833. Each of these bodies underwent natural mummification by the presence of a special mold that absorbed all the moisture from the corpses when they were interred.

The church was founded by The Brotherhood of Good Death in 1567, whose main goal was to assist the poor and the dying. They provided free burial for the dead and kept a detailed registry of all those they buried.
3. The Cimetiere des Chiens, in Asnieres-sur-Seine, France, is often cited as the worlds oldest public pet cemetery.

Opened in 1899, the Cimetiere des Chiens is thought by many to be the oldest public pet cemetery. It was opened after a new French law was enacted stating that pet owners were not allowed to dump their dead pets into the garbage, nor into the Seine River. Thousands of household pets have been buried here, including the legendary Hollywood animal star, Rin Tin Tin.
4. The final resting place for many of Hollywood's greatest stars, in which city would you find Forest Lawn Memorial Park?

Founded in 1906, in Glendale, California, Forest Lawn Memorial Park was one of the first cemeteries to use flat markers as opposed to upright grave markers. The term "memorial park" is still used today to connotate a cemetery that allows only this style of gravestone.

This large burial ground is famous for its famous artwork, and its decorative landscaping. Over a quarter of a million people have been interred in this park, including many of Hollywood's greatest stars, including Errol Flynn, Jean Harlow, and Spencer Tracy.
5. Ironically, the Arlington National Cemetery was built on land confiscated from the family of which Civil War general?

Arlington National Cemetery is a large military cemetery founded originally to bury American Civil War soldiers. The land had originally been the estate of Mary Anna Lee, the wife of Confederate general Robert E. Lee. This beautiful piece of land was confiscated by government, who claimed the owners had not paid their taxes, when the other local cemeteries became full, due to the large amount of casualties that occurred in the area during the war. Hundreds of thousands of American soldiers have been buried at this picturesque cemetery since its inception.
6. What is unusual about the Neptune Memorial Reef?


Answer: It is an underwater memorial park

Also known as the Atlantis Memorial Reef, this unusual burial site is located off the coast of Miami Beach, Florida. When it opened in 2007 it became the first underwater mausoleum for cremated remains, as well as the world's largest man-made reef. Complete with headstones, this underwater memorial garden is the perfect final resting place for anyone who loved the sea.
7. In which country would you be most likely to find coffins hanging from cliff walls?

Hanging coffins lie on beams that project outward from the vertical faces of mountains. Others appear to be hanging when they are actually laying on natural rock projections. The practice of placing the coffin on the side of a mountain instead of in the ground is found in some regions of China, the Philippines and Indonesia.

It was believed that this type of interment prevented the bodies from being desecrated by animals and lifted the soul of the deceased closer to heaven. Outsiders were not sure what these small coffins were at first due to their size.

The deceased are placed in the coffin in fetal position, and the coffin is usually carved from one piece of wood.
8. Which of these cities is known as "Russia's City of the Dead"?

Located in North Ossetia region of Russia, Dargavs is an ancient burial ground that is known as "Russia's City of the Dead". This unusual cemetery is on a very secluded hill and is covered with small white crypts with stone roofs. The higher up the hill the crypt is located, the greater the number of people buried within it.

Many of those interred at this unusual cemetery were buried in wooden structures that look like boats. It is not known why boats were used as there are no navigable rivers in the area. Also, each one of the crypts has a small well dug in front of it. According to Ossetian legend, you would throw a coin in the well. If you heard it hit a stone at the bottom, instead of hitting water, it meant that the soul of the most recently deceased had reached heaven.
9. Which of these capital cities is known for its ancient underground catacombs?

The Catacombs of Rome have been used for burials since the 2nd century A.D. How many thousands of people have been buried in these underground burial chambers is not known. They are a source of both early Christian and early Jewish art of the period. The use of the catacombs declined and by the 6th century, and by the 10th century they had been practically abandoned.

They are maintained today by the Papacy and are a popular tourist stop on most tours of Rome.
10. The Cross Bones cemetery in London was originally used for which of the following groups?

Also known as the Single Women's Graveyard, the Cross Bones Graveyard was the final resting place for thousands of prostitutes. Dating back to medieval times, this location was an unconsecrated cemetery for the women who worked in London's legalized brothels. During the 18th century it became a paupers' burial ground, with the last burials taking place in 1853.
Source: Author dcpddc478 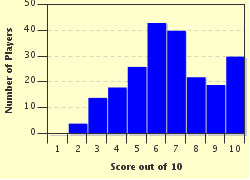 Related Quizzes
This quiz is part of series Places You Want To Go:

Quizzes on lots of places to go and see.