Here is a French quiz for Funtrivia's Francophones in which you select the sentence which describes the scene on a trip through some photos. Bonne chance!

Quiz Answer Key and Fun Facts
1. Something rather unusual in this photo is happening. Which of these French sentences describes it?

"Fuire" is to escape or flee. "Suit" is the third person singular conjugation of the verb "suivre" and is identical to the same conjugated form of 'ętre' or to be. Je suis, tu suis, il suit, nous suivons, vous suivez, ils suivent. "La revanche" is revenge. "Le stade" is the stadium. So the girl is fleeing the orange rhinoceros in the stadium.

This is my daughter and I'm not sure where the rhino came from.
2. Here is a photo opportunity for you. Which of these French phrases best describes this photo?

"Conduire" is to drive. "Faire du vélo" is to ride a bike. You can also say "bicyclette" but you'll hear most children using the former. "Faire du cerf volant" is kite flying. My daughter has never been able to resist these toy cars. This is a toy version of the Fiat 500 in Italy or the "Topolino" aka Mickey Mouse so called because of its appearance.

When she was little she would get in and look at you to put coins in.
3. Which of these sentences in French best describes the picture?

In French, the recorder is called 'la flute en bec' or one with a beak, or fipple mouthpiece. The standard flute is called the "flute traversičre".
4. Here are some people on a special occasion. Choose the French sentence that describes the picture shown.

So the correct sentence reads: The young lady has a white flower in her hair and the young man is taller than she is.
I've put in the wrong answer with horses as the plural for horses is often confusing to French learners. For once though, even French children get that wrong on occasion when they're beginning to speak. Un cheval - des chevaux for horse(s) and un cheveu and des cheveux for hair.
5. Here's a scene in a toy store or 'magasin de jouets'. Which sentence in French describes the photo?

The correct sentence reads as follows: The young girl is wearing a tall blue magician's hat. "jouer avec une poupee" would be to play with a doll. 'en train de dormir' would be 'she is sleeping'. "lit un livre de Harry Potter" would mean she was reading a Harry Potter book.
This is one of the many beautiful shops in California with Gabrielle modelling the wizard or magician's hat.
6. Here's an action scene from a park. But, what is happening? Qu'est-ce qui se passe? Which French sentence describes what is happening in the photo?

Correct answer reads: The boy is pretending to do battle with the statue.
The other answers include the phrase, nettoyer la statue...to clean it. Another answer says that a bird is on the statue and the boy is chasing or hunting it.
One of the answers reads, 'The boy is bored and falling asleep because he's seen too many statues.' You can see our strategy at keeping children alert on holidays.
7. Here is a scene in France. Which of these sentences in French describes the photo?

The correct answer is as follows: Here's the fish merchant. He'd like to sell me some nice fish. From the incorrect answers you'll find the boulanger - baker, the marchand de glaces...ice cream seller, with a coupe chantilly, or dish of ice cream with whipped cream on it and the snail seller with Burgundy snails which are the big ones.
8. Here's an interesting scene. Qu'est-ce qui se passe? What is happening in this scene in French?

The correct answer is: The young lady seems to be holding a heart-shaped balloon in the sky.
The other answers include, a balloon shaped like a diamond, and a moon. The really wrong answer is the 'Man is flying in the sky with a broken heart.'
9. Ah non! Something unusual has happened in this shop window! Which of these French sentences describes it?

Correct answer: A big pastry fell on a woman. Another woman is watching without saying anything.
Other answers included: "une mechante sorcičre" or a wicked witch. "Une peau de banane" is a banana peel. The expression "remonter le morale a quelqu'un" is to cheer them up.
10. Which of these French sentences describes this touching scene?

The correct answer reads: A little boy with a hat is holding a tiny little kitten. The cat takes outs its claws.
From the incorrect answers you have, "Un chiot" which is puppy. "Un tigre" which is tiger.
Tenir is to hold. Don't forget that the present tense can express 'is holding' as well as 'holds' with the same word.

This picture is from a kitten rescued in a field in Scotland.
Source: Author Bruyere 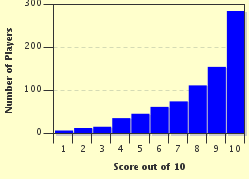