Fun questions about German. You don't have to know too much German, guessing is pretty easy.

Quiz Answer Key and Fun Facts
1. The German word 'Traum' sounds a lot like the English word, which is:

2. The nominative definite articles are:

And that's just singular. German has 16 ways of saying 'the'!
3. What does 'Schadenfreude' mean?


Answer: taking pleasure in others' pain

5. Which pair of words contains an incorrect translation?

'Gesundheit!' is also used in the sense of 'Bless you!' for example when someone sneezes.
7. Which is not a traditional German food?

8. Which is not a German city?

9. Which expression does NOT mean 'crazy'?

guten Geschmack haben means 'to have good taste.' einen Dachschaden haben: to have roof damage (in the head, in other words). verrueckt: crazy. ein Vogel haben: to have a bird (in one's head).
10. In which country is German not the most common language? 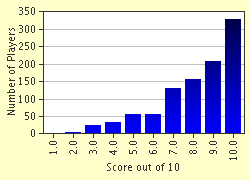 
Other Destinations
Explore Other Quizzes by maggie99