What Are We? British Institutions Quiz

This quiz is about various British sporting, academic and cultural sites - all you have to do in each question is say what type of institutions they ALL are (or were).

Quiz Answer Key and Fun Facts
1. In the UK, what do Heriot-Watt, Napier and Durham all have in common?

Heriot-Watt and Napier are both in Edinburgh. Durham is a prestigious collegiate university, similar to Oxford and Cambridge.
2. Charterhouse, Harrow, and Roedean are all types of what English institution?

Harrow has been an all boys school throughout the 20th Century, while Roedean was a girls' school. Charterhouse was traditionally boys only until admitting girls to the sixth form in the 1970s.
3. What sort of place are Strangeways, Parkhurst, Wormwood Scrubs in the UK?

Strangeways was officially renamed HM Prison Manchester after riots in 1990; Parkhurst on the Isle of Wight in the Solent, Hampshire, was also renamed HM Prison Isle of Wight when it combined with two other prisons on the island. "The Scrubs" is located in West London.
4. What might you expect to see at the UK sites Royal Lytham & St Annes, Wentworth and Carnoustie?

The (British) Open Golf Championships have been held at Royal Lytham & St Annes and Carnoustie, but not at Wentworth, as this is not a links course.
5. What sort of English venue are Ascot, Newmarket and Doncaster?

Newmarket hosts two of the five British Classic horse races, the 1,000 Guineas and 2,000 Guineas, while Doncaster hosts another, the St Leger Stakes. Ascot hosts Royal Ascot in June.
6. Windsor, Glamis and Caernarfon are types of what in different countries of the UK?

Windsor is one of the official royal residences and the largest inhabited castle in the world. Glamis was the family home of Queen Elizabeth, the Queen Mother, throughout almost all the 20th century. Caernarfon was where Prince Charles' investiture as Prince of Wales took place in 1969.
7. In different British cities what are Tate Britain, Baltic and Kelvingrove?

Tate Britain is the original Tate Gallery in London, which has been joined by sister galleries in London, Liverpool and St Ives. The Baltic is in Gateshead, and Kelvingrove is in Glasgow.
8. In the UK what identity is shared by Anfield, Craven Cottage and The Valley?

Anfield is the home of Liverpool FC; Craven Cottage is Fulham's home ground in London; and The Valley is where Charlton FC play in South East London.
9. Edgbaston, Trent Bridge and The Oval. What are all of these in the UK?

These cricket grounds are located in Birmingham, Nottingham and London respectively.
10. What type of building are Castle Howard, Chatsworth and Ragley Hall, all set in the English countryside?

Castle Howard in Yorkshire was featured prominently in the classic 1980s TV adaptation of "Brideshead Revisited". Chatsworth in Derbyshire is, perhaps confusingly, the ancestral home of the Dukes of Devonshire. Ragley Hall is in Warwickshire.
Source: Author saldil 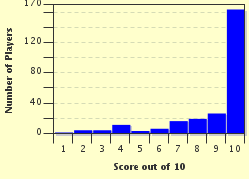 
Other Destinations
Explore Other Quizzes by saldil