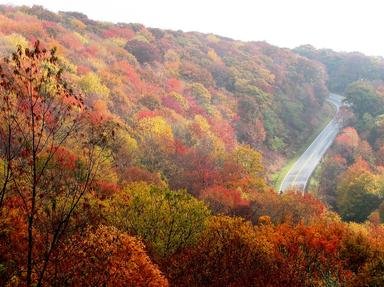 How much do you know about North Carolina? This category is for trivia questions and answers related to North Carolina (Geography). Each one is filled with fun facts and interesting information.
1 The state of North Carolina is home to the highest mountain east of the Rockies. What is the name of this mountain which also shares its name with a state park?


Mt. Mitchell is named for Elisha Mitchell, the University of North Carolina professor who measured the mountain's elevation and later fell to his death on same mountain. He is buried near the summit.

2 Greensboro is the seat of which North Carolina county?


Greensboro is the largest of the three cities that make up the Piedmont Triad. Winston-Salem, which is in Forsyth County, and High Point, in southwestern Guilford County, are the other points of the triad. Greensboro was designated as the county seat, as it was closer to the geographical center of the county than the previous seat of Guilford Court House.

3 Raleigh became North Carolina's capital in 1792. Which city served as the capital immediately before it was moved to Raleigh?


Raleigh was specifically designed to be a capital city, with its site having been selected four years before the city was even established. The General Assembly, North Carolina's legislative body, first met there in December, 1794, and granted the city's charter the next month. Unlike New Bern, which is located on the coast, Raleigh is fairly close to the state's geographical center.

4 Charlotte is located in which North Carolina county?


Mecklenburg County is bordered by seven different counties--Iredell to the north, Cabarrus to the northeast, Union to the southeast, Lancaster and York (South Carolina) to the south, Gaston to the west, and Lincoln to the northwest.

5 How many campuses are there named "University of North Carolina" ?


Asheville, Chapel Hill, Greensboro, Pembroke, Wilmington, Charlotte where my daughter attends, and UNC of the Arts, in Winston-Salem.

6 Who is North Carolina named for?


North and South Carolina are named for King Charles I of England. The word Carolina comes from the Latin word for Charles, Carolus.

7 What city has the North Carolina Zoo?


This zoo is rated as one of the best in the country for its natural surroundings.

8 Wilmington is home to which World War II battleship?

9 What was the name of the island that Sir Walter Raleigh established a colony on?


The colony became known as The Lost Colony. Also where Virginia Dare was born on Aug. 18, 1587.

10 What is the capital of North Carolina?


This is where the capital buildings and many museums are. This is also where I go to school, at North Carolina State University.


The Cape Hatteras lighthouse, along the Outer Banks of N.C., is visible from approximately 20 miles away under normal weather conditions. The lighthouse is measured at 207 feet.


By virtue of the many oaks in the city, it is known as the City of Oaks. In fact, an oak is prominently featured on the city seal.

14 What is North Carolina's state beverage?


Milk was adopted in 1987. North Carolina ranks 20th among the dairy-producing states in the nation. State residents drink more than 143 gallons of milk every year.

15 WBTV, the state's oldest television station, signed on in Charlotte in what year?


Signing on from studios in downtown Charlotte on July 15, 1949, WBTV moved to its present location at One Julian Price Place, west of downtown, in the 1950s. In 2006, WBTV's original parent company, Greensboro-based Jefferson Pilot, merged with Philadelphia-based Lincoln Financial Group. In 2008, the station was sold to Raycom Media.

16 Where did Babe Ruth hit his first professional home run?


This made NC the 11th most populated state in the Union.

18 What small town does Senator John Edwards come from?


Senator Edwards was born in Seneca but raised in Robbins where he went to high school and church.

19 What WB teen drama is filmed in Wilmington?

20 How many battles of the American Revolution took place in North Carolina?


General Cornwallis was driven out of North Carolina after the Battle of Guilford Courthouse in 1781.

21 To indicate that something covers the whole of North Carolina from west to east, natives of the state proverbially use what phrase mentioning two cities on opposite ends of U.S. Highway 64, almost 600 miles (970 kilometers) apart?

Answer: From Murphy to Manteo


Sometimes reversed - "from Manteo to Murphy" - the phrase "from Murphy to Manteo" is used to indicate that the issue under discussion applies to the entire state of North Carolina. Its first public use is recorded during a political campaign for governor in 1876, in which Zebulon B. Vance and Justice Thomas Settle, Jr. squared off in debates throughout the state. Manteo, in Dare County on the Atlantic coast, and Murphy, in the mountains of Cherokee County, are actually 545 miles (around 877 km) apart in driving distance, missing the exact distance across the state from east to west by around 15 miles. While Wilmington is on the coast, Raleigh is on the fall line rather than across the state. Asheville is on the far western edge of North Carolina, but Myrtle Beach is in a different state: South Carolina. Burgaw (the county seat) and Yamacraw (really just a crossroads) are both in Pender County, only a few miles apart.

From Quiz: N.C. Mountains to Sea

22 Jack is ready for a break from history and wants to head to Pinehurst for a few days to indulge one of his favorite hobbies. What is the town's well-known attraction that has Jack ready to head west?


Pinehurst Resort was established in 1895 and has hosted numerous championships. Located in the area known as the Sandhills, the resort and village attract thousands of amateur and professional golfers annually. Antique enthusiasts enjoy shopping in the nearby towns of Aberdeen and Southern Pines, and the city of Fayetteville (home to Fort Bragg) is just an hour's drive.

23 North Carolina has many rivers within its boundaries. A river basin includes all the land that a river gets its water from. Which river basin is the largest in the state?

24 George Preddy, the man for whom one of Greensboro's freeways is named, is best known for doing what?


I-85 Business is named Preddy Boulevard, in honor of a native son who was one of America's most prolific combat flyers. Preddy was credited with 27 kills, including six in a single mission in August, 1944. Preddy died on Christmas Day, 1944, when American anti-aircraft forces accidentally shot him down. He and his brother, William, who also died in combat, are buried in France.

25 The North Carolina State Fair, one of the state's biggest and most popular events, is held in Raleigh each year. During which month is the fair typically held?


Because N.C. State's football team usually plays a major Atlantic Coast Conference foe at home during the State Fair, traffic tends to get a bit hectic on the west side of town. Carter-Finley Stadium, the Wolfpack's home turf, sits on the opposite side of Trinity Road from the State Fairgrounds. The North Carolina Department of Agriculture and Consumer Services manages the fair.

26 To get from Charlotte, North Carolina's largest city, to Asheboro, home of the North Carolina Zoo, which state highway would provide the most direct route?


On its way from Charlotte to Asheboro, NC 49 runs past UNC-Charlotte. The road inspired the school's sports nickname, 49ers.

27 What is the oldest town in North Carolina?

28 North Carolina has how many counties?


North Carolina is the only state in the Union with exactly 100 counties.

29 Where is the Orton Plantation located?


People come to this coastal city to see one of its major tourist attractions.

30 When did North Carolina secede from the Union?


North Carolina provided more troops to the Confederacy than any other.

31 This city is a major port and is also where many movies and the television show 'Dawson's Creek' is filmed?


This is my hometown, and is also where the World War Two battleship USS North Carolina is docked. Also, Woodrow Wilson's father was a minister at the First Presbyterian Church in downtown Wilmington.

32 North Carolina Agricultural and Technical State University, one of the 16 member schools of the University of North Carolina system, was established on March 9, 1891. The school's athletic teams are known by what nickname?


The North Carolina state legislature established A & T, as the school is more popularly known, four years to the day that it established North Carolina Agricultural and Mechanical College (today known as North Carolina State University) in Raleigh. A & T was founded specifically to educate black students, as they were not allowed to attend A & M due to segregation. A & T is well known for its science and engineering programs, and has produced a number of notable alumni, including the late astronaut Dr. Ronald McNair. A & T's sports teams participate in the Mid-Eastern Athletic Conference.

33 Raleigh boasts the oldest historically black college in the southern United States. What is the name of this school?


Founded in 1865, Shaw University is a private liberal arts school that grants degrees in a number of disciplines, including computer science, public administration and business administration. Raleigh's other historically black college, St. Augustine's, was founded in 1867. Meredith College is a private women's school in the city and, according to the USjournal of Academics, is the largest such school in the Southeastern United States. North Carolina Central University, a historically black school and member of the University of North Carolina system, is located in Durham.

34 Which US highway would take the weary traveler from Rockingham north to Greensboro?


Much of US 220 north of Asheboro has been signed for future Interstates 73 and 74, which are under construction.


The emerald was selected as the state gem in 1973. In 1970, the largest emerald ever found in North America was found in North Carolina near Hiddenite. The stone was cut and polished, increasing its value to $100,000.

36 What is the nickname of UNC-Charlotte's athletic teams?


Founded as Charlotte College in 1946, UNC-Charlotte joined the University of North Carolina system in 1963. The university sits on state highway 49 in northeast Charlotte. In recent years, the teams have been known specifically as the Charlotte 49ers, to avoid confusion with the system's main campus, simply known as UNC, in Chapel Hill.


Invented in 1898 by Caleb D. Bradham in his pharmacy which is now the museum.

38 North Carolina has two mountain ranges in the southern Appalachian chain. Can you name either?


These two ranges cover the western one fifth of the state. The highest point east of the Mississippi, Mt. Mitchell, is located in the Blue Ridge Mountains.

39 What city has a record of being the 'Furniture Capital'?


All of these cities manufacture furniture but only one has the title.

40 What Confederate General was the last to surrender after the Civil War?


He surrendered to Gen. William T. Sherman near Durham, NC.

The rest of the questions and answers can be found in our quizzes here:
North Carolina Quizzes